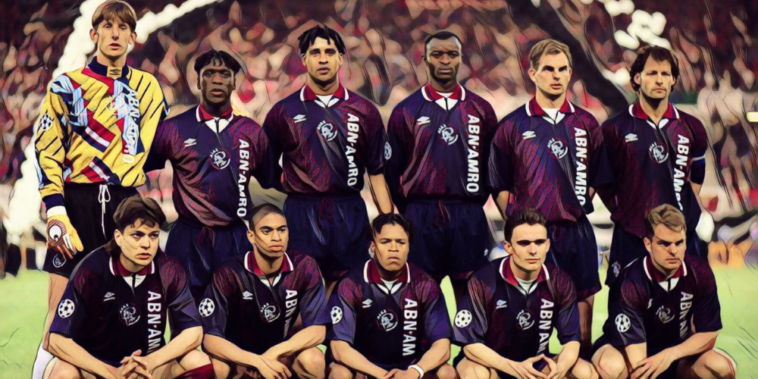 Ajax boast one of the most respected reputations in world football when it comes to producing talent, the Dutch side having seen a stellar list of names emerge from the ranks, each ingrained with the club’s fabled footballing philosophy.

The Amsterdam outfit enjoyed a glittering period to win three consecutive European Cups during the 1970s, before an exciting new generation of players emerged in the mid-nineties to bring continental success back to the capital club.

Ajax’s home-grown core of players enjoyed arguably the most historic season in the club’s history, completing the entire Eredivisie season without defeat, before winning the Champions League with a 1-0 victory over holders AC Milan in Vienna.

Patrick Kluivert became the youngest ever final goalscorer after netting the winner aged just 18 years and 327 days, crowning Louis van Gaal’s side as champions of Europe for a fourth time.

Here is the iconic Ajax side that beat AC Milan to win the Champions League in 1995.

Edwin van der Sar was a key component of Ajax’s Golden Generation, establishing himself as undisputed first choice in the season prior to the club’s historic double success.

He made 312 appearances for the Dutch side across all competitions before Europe’s elite came calling, signing for Juventus where he endured an indifferent two-year spell in Italian football.

Van der Sar later signed for Fulham in a surprise deal, where his performances persuaded Sir Alex Ferguson to sign the veteran in a bid to finally replace Peter Schmeichel, following a series of failed attempts.

The Dutchman cemented his status as one of the best goalkeepers of his generation during a trophy-laden spell with the Red Devils, winning four Premier League titles and a second Champions League winners’ medal in 2008 – the longest ever gap between two successes in the competition.

Michael Reiziger broke into the Ajax side ahead of the 1994/95 campaign, having developed his game during loan spells with Volendam and Groningen in the previous two seasons.

The right-back’s speed and energy made him the perfect prototype for the modern full-back and he won two league titles with Ajax before spells with AC Milan and Barcelona.

The 72-cap Dutch international spent seven seasons with the latter and won back-to-back Spanish titles in the late nineties, before finishing his career with short spells at Middlesbrough and PSV Eindhoven.

He is currently working as assistant manager to Erik ten Hag at Ajax.

Blind, however, became a key figure in several successful sides over a 13-year career in Amsterdam, winning five league titles and becoming one of just two Dutch players to have won the UEFA Cup Winners’ Cup, UEFA Cup and Champions League.

Blind made 494 appearances for Ajax and was named Dutch Footballer of the Year in 1995 and 1996, with the defender’s son, Daley, a part of the current Ajax side.

Frank Rijkaard retired following Ajax’s 1995 Champions League success, the final fixture of an iconic career that saw the star become one of the Netherlands’ greatest ever footballers.

Rijkaard won three league titles during a first spell with Ajax after coming through the ranks, though a falling-out with Johan Cruyff saw him move on to Sporting Lisbon and Real Zaragoza, before joining compatriots Ruud Gullit and Marco van Basten at AC Milan.

The trio of Dutch superstars helped Milan to back-to-back European Cup triumphs in 1989 and 1990, with Rijkaard scoring the winner in the latter success against Benfica.

Amongst the best midfielders of his generation, Rijkaard marshalled this Ajax side from a deeper role in his final game, assisting Kluivert’s winner as the Dutch side were crowned European champions.

Starring alongside twin brother Ronald in Ajax’s victorious side, Frank de Boer started his career at left-back before evolving into a ball-playing centre-back.

De Boer’s technical qualities saw him shine for a decade as a first-team regular, winning five league titles and making 431 appearances before moving on to Barcelona, where he won a La Liga title in 1998/99.

The left-back also won 112 caps for the national side – the second-highest amount in history – before returning to Ajax as manager, guiding the club to four consecutive Eredivisie titles.

De Boer later endured more difficult managerial spells at Inter Milan and Crystal Palace, and is currently in charge of the Dutch national side ahead of this summer’s European Championship.

Edgar Davids’ dreadlocked hair and spectacled appearance made him one of the most distinctive footballers of his generation, whilst the midfielder’s renowned tenacity and energy made him a nightmare opponent.

Davids was aggressive in the challenge and possessed an ability to drive forward and make things happen, breaking into the Ajax side as a teenager and winning a wealth of silverware before spells at some of Europe’s giants including both Milan clubs, Juventus and Barcelona.

He appeared in four Champions League finals during his career, spending time in English football during his latter career with Tottenham, Crystal Palace and a bizarre player-manager spell at Barnet.

The only man in history to win the Champions League with three different clubs, Clarence Seedorf picked up the first of his four career winners’ medals as part of Ajax’s fabled 1994/95 side.

Seedorf was a wonderfully gifted midfielder who made an immediate impact as a teenager, though spent just three seasons in the first-team before deciding to join Sampdoria on a free transfer.

Four seasons and another Champions League success at Real Madrid followed, before enjoying spells on both sides of the Milan divide.

Seedorf’s time with AC Milan was the pinnacle of his career, making 432 appearances and winning two league titles and two Champions League trophies with the Rossoneri.

Jari Litmanen became the first Finn to win the Champions League and was the creative heartbeat of this Ajax side, having stepped into the role vacated by the departing Dennis Bergkamp to become the central figure of the side.

Litmanen enjoyed the best period of his career during the mid-nineties with Ajax, scoring 129 goals for the club in all competitions, including a team-high of 27 during their incredible 1994/95 campaign.

He scored goals prolifically and created countless others, Litmanen one of the best playmakers of his era and a player who injury perhaps prevented from reaching even greater heights.

Unquestionably Finland’s finest ever footballer, he had injury-plagued spells at Barcelona and Liverpool before returning to Ajax for a short second spell in the early 2000s.

Ajax’s wide players were a vital component of Louis van Gaal’s entertaining side, with Nigerian winger Finidi George one of three non-EU players available for selection.

George provided width and spark on the flanks, scoring a spectacular goal during the semi-final win over Bayern Munich that lives long in the memory.

George spent three seasons with Ajax and won three consecutive titles, though failed to recapture those heights upon his departure despite a promising period at Real Betis.

He later had a disappointing spell at Ipswich Town, forming part of the side relegated from the Premier League during the 2001/02 season.

Marc Overmars’ electric pace struck fear into opposition sides and provided Ajax with the perfect outlet on the counter-attack, though there was skill to match the speed for one of the Netherlands’ great wide players.

Overmars was brilliant during Ajax’s wealth of successes during the nineties, before signing for Arsenal and helping the north London side to a domestic double during his maiden campaign in the Premier League.

The winger spent three seasons tormenting Premier League full-backs before signing for Barcelona, becoming the most expensive Dutch footballer in history after completing a £25m move to the Camp Nou.

Injuries hindered his time in Catalonia however, as Dutch football’s ‘Roadrunner’ announced his retirement due to persistent knee problems aged just 31.

Ronald de Boer was a footballer comfortable playing practically any position on the pitch, with the twin brother of left-back, Frank, featuring as a nominal forward in the 1995 final against Milan.

The careers of the two brothers would intertwine, spending time as teammates at Ajax, Barcelona, Rangers and Qatari sides Al-Rayyan and Al-Shamal.

Ronald was a goalscoring midfield talent who enjoyed his greatest successes in the Dutch capital, twice being named as Dutch Footballer of the Year alongside five title wins and Champions League success.

After a testing period in Barcelona he shone as part of a Dutch revolution at Rangers, scoring 32 league goals in 91 appearances and winning a domestic treble in 2002/03.

One of African football’s greatest exports, Kanu came on as a substitute during the final with the teenager having showed huge promise in his early Ajax career, possessing fine footwork and a penchant for providing moments of inspiration.

The Nigerian scored 25 league goals across three seasons with Ajax before joining Inter Milan, though struggled to adapt before thriving upon a move to Premier League side Arsenal.

He won two league titles and two FA Cups with the Gunners, including forming part of the north Londoners fabled ‘Invincibles’ side during his final campaign.

Kanu – twice named as African Footballer of the Year – later lifted a third FA Cup with Portsmouth, scoring the decisive goal in the final win over Cardiff.

Patrick Kluivert wrote himself into the record books to seal Champions League success for Ajax, coming off the bench to stab home a winner and become the youngest ever final goalscorer.

The teenager had enjoyed an incredible debut season, his final winner his 21st goal of the season as the forward emerged as one of Dutch football’s most exciting prospects.

He scored 52 goals in 100 appearances for Ajax before joining AC Milan, though spent just a single disappointing season in Italy before moving to Barcelona.

Kluivert excelled under former Ajax manager Van Gaal at the Camp Nou, forming a brilliant partnership with Rivaldo as Barcelona won the title in 1998/99 and scoring 122 goals for the club in all competitions.

Kluivert was the all-time leading scorer for the Dutch national side with 40 goals, until he was eclipsed by Robin van Persie in 2013.