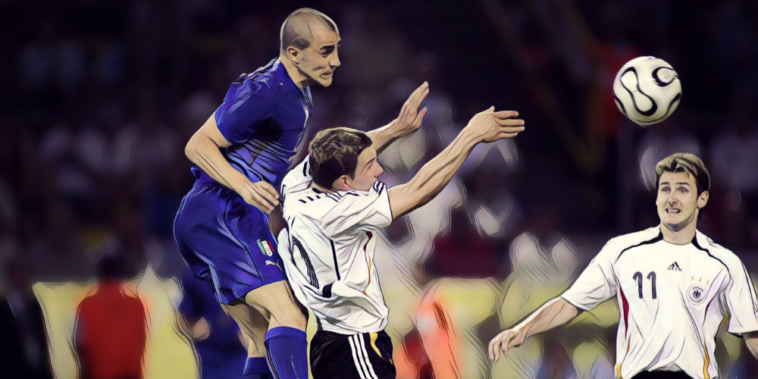 Defenders are invariably omitted from the conversation about the greatest performances of all-time. Outstanding defensive displays are hard to recall and even easier to overlook.

Those that endure in our memory only tend to do so if they are punctuated by a performance-defining tackle. Bobby Moore’s perfectly timed block on Jairzinho capped a commanding display against Brazil in the 1970 World Cup. Similarly, the highlight of Fabio Cannavaro’s influential performance in 2006, was undoubtedly his challenge on Germany’s Lukas Podolski.

The passage of play that led to that tackle is Cannavaro’s pièce de résistance, his magnum opus. In what was a performance of a lifetime for the veteran Italian defender, his challenge on Podolski was merely the cherry on top.

This mouthwatering semi-final tie pitted the host nation Germany, who were among the favourites to win the competition, against the tournament’s dark horses Italy. The media billed it as a meeting of World Cup royalty, a clash of European heavyweights. The contrast between the sides delighted and intrigued us. It was art vs industry – expression vs efficiency. Add a vocal home crowd into the mix and it had all the ingredients for a Homeric affair.

The Italians had cruised through the early stages of the competition, finishing undefeated at the top of their group. Traditionally Italian sides had been associated with a defensive ethos but, with Marcelo Lippi at the helm, Gli Azzurri (the Blues) had a more expansive attacking outlook.

Full-backs Fabio Grosso and Gianluca Zambrotta, were encouraged to bomb forward at every opportunity. Despite their progressive style, and losing Alessandro Nesta to injury, the Italian defence remained staunch throughout, conceding just one goal en route to the semi-final.

The German side facing Cannavaro et al was typically… German. The age-old stereotypes were all represented. This iteration of Die Mannschaft were highly efficient, physically imposing and had that unwavering determination synonymous with well-oiled German machines. Spearheaded by Miroslav Klose, the tournament’s top marksman, they posed a potent attacking threat. The Germans, coached by Jürgen Klinsmann, were on fire in front of goal, scoring 11 in their 5 matches leading up to the semi-final.

The match began as many predicted, with the home nation in the ascendancy. Klinsmann’s side attacked relentlessly in the first half, but the central defensive partnership of Cannavaro and Marco Materazzi could not be overcome. In the twilights of their careers, the duo adopted a cerebral approach to defending that evening. When possible, they engaged the quicker German attackers long before they could reach the Italian penalty area.

The running battle that developed between Cannavaro and Podolski that evening was a fascinating watch. Every time the Köln striker appeared in a position to threaten the Italian goal, Cannavaro was there to stifle him. The German had two clear opportunities to shoot inside the opening 15 minutes, but was immediately shut down on both occasions. As Cannavaro won each successive duel, his opponent’s confidence eroded away.

Cannavaro’s dominant display hardened the resolve of his fellow defenders and the Italians repelled wave after wave of attack. As the end of normal time approached the tie remained goalless. The partisan home crowd, who heavily outnumbered their Italian counterparts, were becoming palpably frustrated. An air of ‘not our night’ descended among the German supporters. Their disbelief was reflected on the pitch, where it seemed the more the German’s advanced, the more robust the Roman’s phalanx became.

Like a boxer on the ropes, the Italians soaked up the shots for eleven gruelling rounds. In extra-time they came out swinging. With a minute left on the clock Andrea Pirlo’s surgical pass dissected the German defence. Grosso, with a swing of his left peg, swept the ball past a stranded Jens Lehman and into the corner of the net. As the home crowd fell silent, in shock, the tiny pocket of Italian fans, who were crammed into the corner of the stadium, erupted like Vesuvius.

This angle of Fabio Grosso's goal vs Germany in the 2006 World Cup semi-final, plus Francesco Totti's celebration, is all kinds of wonderful. pic.twitter.com/KKAnIJeBRh

By the time the match had resumed there were just seconds remaining on the clock. A battle-weary Michael Ballack, desperately seeking an equaliser, launched the ball into the Italian penalty area for the umpteenth time that evening. Underneath the cross stood a colossal mismatch – Cannavaro vs the giant, 6’6” Per Mertesacker. The German’s towering height advantage should have told, but on an evening when the Italian’s defending was faultless, size counted for little.

Cannavaro, like his legendary countryman Franco Baresi, was a diminutive 5’9”. Both endured questions from the media about their height throughout their careers. When confronted by that criticism in interviews Baresi would often brush it off, saying, “I never felt it was a hindrance or felt inferior.”

On that summer night in west Germany, Cannavaro stood head and shoulders above everybody else. With a soaring leap, the captain of the Azzurri rose majestically above the statuesque Mertesacker, and headed the ball high into the Dortmund night sky… but the danger hadn’t passed.

Our old friend Herr Podolski stood 30 yards from goal, waiting for the ball to drop, with a glint in his eye. A cultured striker, he was the last player the Italians wanted to see on the ball. The German forward watched in anticipation as the ball descended, only breaking his laser focus to check that he was still unmarked. He was alone – there wasn’t a soul in his proximity. Not yet at least.

While his teammates stood on and watched, Cannavaro, belying his 32 years, charged at Podolski like a lifeguard to the surf. The German, noticing the Italian defender in his peripheral vision, fumbled the ball. It rebounded off his chest and landed between them. Cannavaro, chest puffed-out and braced for impact, launched himself carelessly towards the ball. A fatigued Podolski, reeling from 120 minutes of sapping football, could only look on as the effervescent Cannavaro chested the ball away to safety.

That passage of play from Cannavaro was so enthralling, so athletically impressive, that it’s forever etched in our minds. All the instincts the ex-Parma and Inter defender had honed over a glittering career were there for the world to see. Shocked by his own performance that night, Cannavaro has since reflected on that challenge, saying, “It was an extraordinary game, played at such a high level. When I see the intervention back, I ask myself ‘was that really me doing it?’”

Happy Birthday to the King of Turin – Alessandro Del Piero. Check out this great goal against Germany in the 2006 World Cup semi-final. pic.twitter.com/BQ8vOTkRHk

With the roars of ecstatic Italian fans in his ears, Cannavaro, out of breath after his exertion, gladly handed possession over to teammate Francesco Totti. Moments later, Alessandro Del Piero, Cannavaro’s teammate at Juventus, sealed Italy’s place in the final with an exquisite finish past a static Lehmann.

As the Italian striker wheeled away to celebrate and German tears started to flow, Del Piero’s teammates were busy mobbing the man who made that goal, and their victory, possible – Cannavaro

Despite the tie being stacked in their favour, the Germans could have played on all-night without scoring. Cannavaro, who reflected on his side’s performance in a 2016 interview, reckons the Azzurri were destined to win that night.

“The key moment for me was when we came out onto the pitch. All the German players were tall and focused, but none of them looked you in the eye – everyone was looking down. When it was done I said to Buffon, ‘Gigi, we’ve already won this’. And he looked at me and asked, ‘how so Fabio?’. I replied, ‘Because they’re at home, they have the entire crowd behind them, but they’re afraid’.”

Cannavaro is a modest man. He would be first to point out that he played a small part in a greater collective effort. The defensive unit he led exuded experience. Buffon, Cannavaro, Materazzi, Grosso, Zambrotta – about as seasoned as they come. Add the screening abilities of Gennaro Gattuso and his understudy in the tournament, Daniele de Rossi and it’s no wonder their defences were almost impossible to breach.

The Italian’s road to the final saw them equal the record for fewest goals conceded (2) as winners of the tournament – a record set by France in 1998 and equalled by Spain in 2010. That accolade speaks volumes about how they won the competition. The Italians went on to beat France in the final, on the night when that infamous Zinedine Zidane headbutt stole all the headlines.

In the aftermath of the World Cup the footballing world was waxing lyrical about Cannavaro’s exploits. His standing within the game was at its peak. It came as little surprise when the Italian, affectionately nicknamed Il Muro di Berlino (the Berlin Wall) for his exploits, was announced as the 2006 Ballon d’Or winner.

Ballon d’Or-winning defenders are about as rare as hens’ teeth. It’s no wonder that the handful of recipients thus far include some of the finest defenders to have graced the game. Cannavaro shares this exclusive honour with Germans Franz Beckenbauer (‘72 & ‘76) and Matthias Sammer (‘96) – men who put the ‘man’ in Mannschaft.

Cannavaro is rightfully revered as one of the all-time great defenders. A Rolls-Royce of a player, his sparkling career, which saw him play for the cream of European clubs, spanned almost 20 years. His masterful display against Germany set the benchmark for a defensive performance – one that has yet to be equalled.