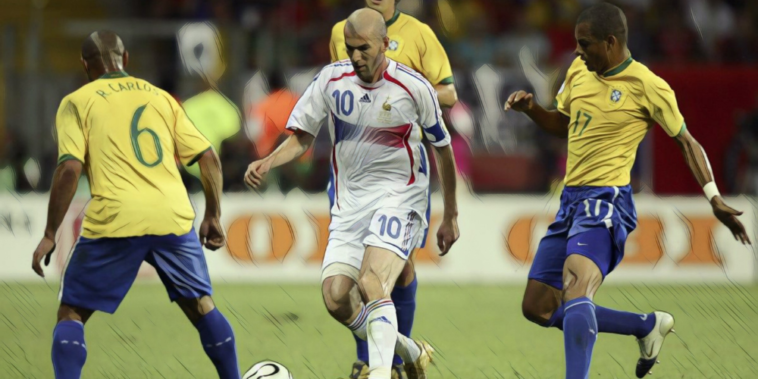 Special players are defined by the biggest games in their careers, performances or moments which leave an imprint on the memories of football fans across the world.

Zinedine Zidane is a player whose story includes countless microcosms of his gifted genius, for many the zenith of the former Ballon d’Or winner his match-winning intervention to seal World Cup success for France on home soil.

Zidane’s brace of headers against Brazil saw Les Bleus crowned as world champions for the very first time in Paris, the midfielder of Algerian descent the poster-boy for a new and diverse France who welcomed the world’s best to their shores before emerging as football’s number one.

The image of Zidane’s face projected onto the Arc de Triomphe above the words, ‘Merci Zizou’, in the aftermath of that clash with Brazil lives long in the memory, though it is another performance against the South American superpower – some eight years later – which is the subject of this feature.

Eight years after their World Cup triumph, France travelled to the 2006 World Cup in what was announced pre-tournament as the final swansong for the nation’s greatest player.

Zidane’s announcement that he would retire from football following the World Cup only upped the intrigue around the French performance, having disappointed in early exits at the previous two major tournaments.

France were considered outside contenders pre-tournament, with holders Brazil favourites in the betting market followed by the likes of England, Argentina and hosts Germany.

Raymond Domenech’s side did, however, have trophy-winning experience and some of the game’s greatest names, the veteran Zidane joined by the likes of Thierry Henry, Patrick Vieira and David Trezeguet.

Their campaign began disappointingly as a goalless draw with Switzerland was followed by a 1-1 draw with South Korea in the group stages, Park Ji-Sung’s late equaliser for the Asian nation leaving France third after two games, two points behind both the Koreans and Swiss.

Switzerland’s victory over South Korea in the third round of games meant France qualified as runners-up following a 2-0 win over Togo, goals from Vieira and Henry ensuring another early elimination was avoided.

Reward for progress was a last-16 meeting with an emerging Spain and it proved the start of a renaissance for the French, overturning a half-time deficit to win 3-1 and reach the last eight, Zidane scoring his side’s third in stoppage-time.

Victory ended a 25-game unbeaten run for the Spanish and instilled a new-found belief in France, ahead of a quarter-final showdown with favourites and holders Brazil in Frankfurt.

The starting line-ups were a who’s who of illustrious global names, as France prepared to go head-to-head with the likes of Kaka, Ronaldo and reigning Ballon d’Or winner Ronaldinho.

There was one star who shone brightest, however, a French footballing fantasist who toyed with some of the game’s greats, a defining performance in the very twilight of his career.

Zidane often played the game on the edge with a straight-faced glare commonplace in the heat of battle, but as the pre-match tension built in the stadium he was a picture of relaxation, sharing a joke with Real Madrid teammate Ronaldo and looking like a player ready to enjoy what could possibly be his last 90 minutes.

From the first whistle, he was imperious.

Just 35 seconds were on the clock when he glided past the entire Brazil midfield singlehandedly, turning away from Ze Roberto and Kaka before waltzing beyond Gilberto Silva with a step over.

His final ball was poor, but this was a warning sign of what was to come.

Taking the bull by the horns he went toe-to-toe with Brazil’s brightest stars and outshone each, almost toying with the midfield of the Selecao, receiving the ball in tight areas and spinning away from desperate challenges.

Zidane at his best was amongst the most aesthetic pleasures of modern football, a footballer who combined graceful artistry with bullish strength, challenges either glided past or swatted aside.

Kaka felt the full force of his deceptive strength just before the half hour, as Zidane held off the challenge of the youngster, simultaneously juggling the ball effortlessly before volleying a pass into another white shirt.

He carried the ball in possession in an elegant and unique manner, one such float across the pitch evading two Brazilian tackles before releasing Patrick Vieira with a defence-splitting pass, Juan’s desperate foul on the Frenchman all that prevented a Zidane assist on the stroke of half-time.

This was the biggest stage in world football and for Zidane it all appeared effortless.

He nonchalantly lifted one ball over the head of club colleague Ronaldo early in the second half, before heading a pass into the path of the onrushing Eric Abidal, whose marauding run forward resulted in a free-kick.

Zidane stood over the set piece before curling an exquisite cross into the path of the unmarked Thierry Henry, who volleyed home the only goal of the game to send France into the last four.

The remaining minutes of the contest saw France look to retain possession and keep Brazil at bay, Zidane the puppet master in central areas, often lending the ball to a teammate before demanding back possession.

Brazil could barely get close to a maestro at work, viewers left scratching their heads as a 34-year-old Zidane made a mockery of some of world football’s finest talents.

This was a player ready to call time on his career in just a matter of days, turning the World Cup stage into his own personal playground.

Perhaps his impending retirement brought the best out of his supernatural talents, the midfielder playing without any inhibitions and a confidence to express himself in mesmeric Zidane style.

France’s campaign up until the knockout stages had been laborious and unimaginative, but their attacking talents harmonised in the latter stages with Zidane the classy conductor of the symphony.

The conquering of Brazil was followed by a 1-0 win over Portugal in the last four, Zidane scoring the only goal from the penalty spot to set up a final showdown with Italy in Berlin.

He scored again from the spot in audacious fashion to open the scoring at the Olympiastadion, though his stamp on a second World Cup final was not the one expected, the final act of a glorious career a red card for head-butting Marco Materazzi.

It was far from the fairytale finish for Zidane as France lost the final on penalties.

His moment of madness remains sadly the overriding memory of his tournament, but his balletic brilliance in dismantling Brazil was an encapsulation of the finest footballer of his generation and one of the most iconic individual performances in football history.