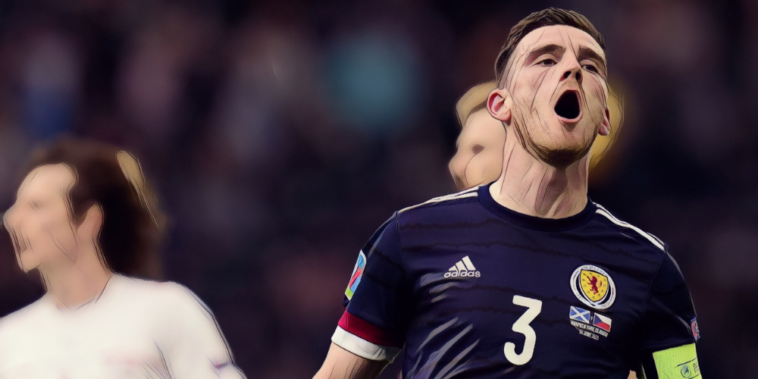 Andy Robertson says Scotland’s 2-0 defeat to the Czech Republic in their Euro 2020 group stage opener was a ‘tough lesson’.

Steve Clarke’s side were beaten in their tournament opener at Hampden Park, as Patrick Shick scored twice for the Czechs to get their campaign off to a perfect start in Glasgow.

Scotland started brightly and created several opportunities during an impressive opening, though failed to make the most of their chances and were dealt a hammer blow on the stroke of half-time when Schick headed home the opening goal of the game.

The 25-year-old doubled the Czech Republic’s advantage and his personal tally in sublime style just seven minutes after the interval, launching a shot from almost 50 yards after spotting David Marshall off his line – the furthest distance a goal has ever been scored from at a European Championship.

Scotland pushed hard to get a foothold back into the game but struggled to produce moments of quality when venturing forward, with Robertson admitting the difference between the two teams was the ability to convert chances.

“It’s hard to put your finger on it just now,” Robertson told the BBC.

“Everyone in the country wanted to get off to a good start. We were confident, excited, and it comes down to not taking our chances.

“You can’t say we’ve not created, we’ve had some really, really good chances that we should have done better with.

”If you do better on that, then it’s a different game. It’s a tough lesson for us that at the highest level, at the best tournaments, you have to take your chances. Czech Republic did that, we didn’t.”