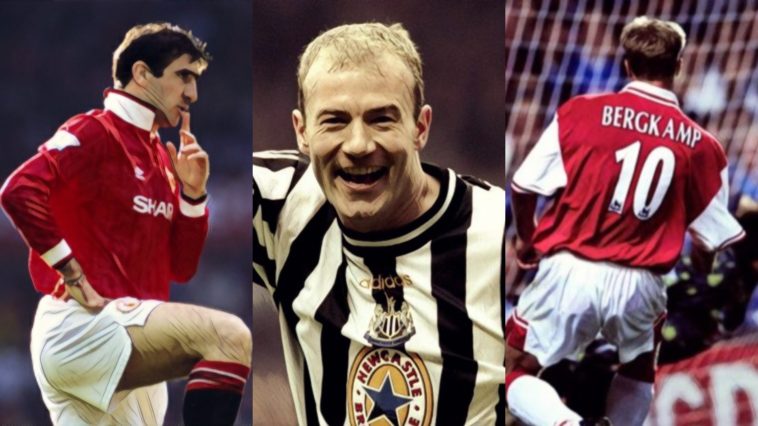 There are few eras which evoke quite the nostalgia that the nineties does, a time in which English football was irreversibly changed by the launch of the Premier League and we were introduced to the now global phenomenon we enjoy today.

It was a gripping decade of top-flight football as a host of continental stars arrived on these shores, with many establishing themselves amongst the most iconic names in Premier League history.

Manchester United emerged as the new dominant force, though the Red Devils were challenged by a succession of exciting sides including Blackburn Rovers, Newcastle United and Arsenal.

We’ve decided to look back on the nineties to try and whittle down the defining figures of the era.

The ten best Premier League players from the 90’s:

Throughout the Premier League’s near three decade existence there have been several stars who have burst onto the scene, with Fowler’s emergence at Liverpool amongst the most exciting the division has seen.

The teenage academy graduate made headlines after scoring five times in League Cup tie against Fulham and finished his first season in the first team with 18 goals in all competitions. He went on to net 30-plus for three consecutive campaigns during a prolific period for the Reds.

His performances saw him become just the second player after Ryan Giggs to win the PFA Young Player of the Year twice, claiming the accolade in successive seasons in 1995 and 1996.

Fowler is often described as one of the most natural finishers English football has witnessed, which was most devastatingly on show when he memorably dismantled Arsenal with a four-minute hat-trick as a teenager. But for injuries he would no doubt have been higher than seventh in the Premier League’s all-time leading scorers.

The local lad done good came to be known simply as ‘God’ on the terraces at Anfield, with no player having ever scored more than his 93 goals before his 23rd birthday.

Andy Cole is a name that if often overlooked when it comes to the Premier League’s greats, but the former Newcastle and Manchester United star deserves to come into the conversation of the division’s finest finishers.

Just two players have ever scored more Premier League goals than Cole, his 187 goals beating the likes of Sergio Aguero and Thierry Henry – with just one of those strikes incredibly coming from the penalty spot.

Cole was simply electric when he arrived into the Premier League with Newcastle and his 34 goals in 1993/94 season saw him claim the division’s Golden Boot and PFA Young Player of the Year award. He made a sensational move to Manchester United in a British transfer-record deal in 1995, winning five league titles and the Champions League during a glittering period.

And only one was a penalty. 😱 pic.twitter.com/sG09LEFlul

There are perhaps players with greater finesse and even talent, but there are few who delivered with such regularity during a period in which the Premier League was truly blessed with lethal frontmen.

Manchester United’s dominance of the first decade of the Premier League means that the Red Devils are well represented on this feature, with David Beckham coming in at eight on our list of the 90’s finest footballers.

Beckham emerged as part of a group of academy graduates who would form the spine of a winning machine under Sir Alex Ferguson, United crowned as champions in five of the first seven Premier League campaigns.

The midfielder’s stratospheric fame and celebrity status perhaps took away acknowledgement of the talent he possessed, but Beckham was a fabulous footballer with outrageous technique and finished as the Premier League’s leading assist provider on three occasions during his career.

Beckham’s finest campaign came during the greatest in Manchester United’s history as the club secured a historic Premier League, Champions League and FA Cup treble in 1998/99. The star finished runner-up for both the Ballon d’Or and FIFA World Player of the Year award in addition to winning UEFA’s Club Footballer of the Year accolade.

One of several defining imports who lit up the Premier League in the nineties, Gianfranco Zola delighted football fans during a sensational seven-year spell at Chelsea.

Zola had honed his talents in his native Italy and won major honours with both Napoli and Parma before heading to Stamford Bridge, his £4.5m signing amongst the west London side’s greatest ever investments.

Statistical-weighted arguments would perhaps overlook the little Italian’s contribution but Zola was a majestic talent, one who produced moments few on these shores had seen before. His instant impact saw him named as the FWA Footballer of the Year in 1997 despite not arriving in the Premier League until November.

Zola’s arrival pre-dated Chelsea’s billionaire takeover and transformation into a footballing heavyweight, though the tricks, flicks and glorious goals helped the club to four major honours and saw him leave having been voted as the Blues’ greatest ever player.

He was the nice guy whose sublime skill only made him more endearing, a player who was box-office viewing and so often the inspiration for his side.

Peter Schmeichel formed the intimidating last line of defence for Manchester United throughout the nineties, the goalkeeper one of the first overseas stars of the division and still widely acknowledged as the Premier League’s greatest goalkeeper.

The Dane arrived into English football for a bargain fee of just £505,000, one of the shrewdest investments of Sir Alex Ferguson’s glittering reign with the shot-stopper proving a hulking presence between the posts.

Schmeichel was a ferocious competitor and leader from the back, whilst his enormous physical presence ensured opposition forwards were always in doubt when presented with goalscoring opportunities.

He won five league titles and the Champions League before departing for Sporting Lisbon at the end of the decade, whilst he remains the only goalkeeper to win the Premier League’s Player of the Season award.

Longevity complicates the conversation around Ryan Giggs’ position in these rankings, but the exhilarating talent with which he burst onto the scene at Manchester United means he deserves his place in this list based on ability alone.

Giggs was a frightening proposition for opposition full-backs at the peak of his powers in the nineties, his scintillating speed and dribbling ability a key element of United’s attacking play.

The Welshman won five league titles during the decade and won back-to-back PFA Young Player of the Year accolades, whilst he was an important component of the Red Devils’ treble-winning side in 1999.

Giggs’ incredible success – becoming the most decorated player in the history of British football – ensures his legacy is everlasting, but it is the flying forward threat of his youth that should be the abiding memory of an icon.

Premier League history is littered with transfers that helped transform a side’s fortunes, and for Arsenal of the mid-nineties it was the arrival of Dennis Bergkamp that started the charge to prominent success.

Bergkamp arrived from Inter Milan and was was initially branded a ‘flop’ following a difficult start, before growing in stature and confidence, exuding the creative quality that would come to define one of the Gunners’ greatest players.

The Netherlands international brought an aura to the Arsenal side with his mix of steely-eyed spirit and ice-cold composure, receiving the ball in tight areas and shouldering responsibility for knitting together attacks.

This was a player equally adept at scoring and creating and whose technique has perhaps never been matched in the Premier League era, his iconic hat-trick against Leicester in 1997 arguably the best treble the division has seen.

Bergkamp was named as the PFA Player of the Year and FWA Footballer of the Year as Arsenal claimed a historic domestic double under Arsene Wenger in 1997/98, the catalyst for change at Arsenal and a man who transformed the north Londoner’s style from dogged determination to footballing fantasy.

They simply don’t make them like Roy Keane anymore.

Keane was the driving force of Manchester United’s legendary sides of the nineties and player for who standards were never allowed to slip – not for himself or for anyone who shared his dressing room.

The Irishman was an unstoppable force of sheer will to win, a warrior-like presence in the club’s engine room whose energy and competitive edge led his side to several silverware successes.

Far more than an enforcer with an intimidating aura, however, Keane was a fine footballer with a criminally underrated passing range and the intelligence to make vital contributions in both boxes.

He won five league titles, three FA Cups and the Champions League during the decade and was so often the inspiration in moments of need for United, Keane remaining arguably the finest captain the Premier League has ever seen.

There are many who credit Eric Cantona with changing the landscape of English football entirely, such was the forward’s phenomenal impact upon signing for Manchester United.

The gifted Gallic star was signed by Sir Alex Ferguson in a shock move from rivals Leeds during the Premier League’s inaugural season, inspiring the Red Devils from eighth at the time of his arrival to a first top-flight crown in some 26 years.

If ever there was a player and club who fitted perfectly together than this was it, Cantona swaggering into his new surroundings and turning United into the Premier League’s dominant force.

Cantona was a maverick but he was a match-winner, dragging an emerging side forwards through sheer personality and moments of pure genius, winning four league titles in his five seasons at Old Trafford to emerge as the league’s most influential star.

He was not without controversy, of course, but perhaps no other player has left such an indelible mark on the history of the Premier League. Cantona’s swagger and style ensured that his name is still regularly sung on the terraces more than two decades after his departure.

Our number one nineties Premier League footballer is Alan Shearer, a player who for many is the defining player of the decade and one who remains the greatest goalscorer in the division’s history.

Shearer scored a record-breaking 260 goals during an incredible career at the top-level but his finest performances undoubtedly came in the nineties, his peak at Blackburn seeing the star become an irresistible goalscoring force.

Shearer will forever be associated with boyhood club Newcastle United and became the Magpies’ all-time record goalscorer during the second part of his career, but the pre-injuries version of the forward who terrorised defences at Ewood Park remains English football’s best number nine of the modern era.

His four-year spell with Blackburn delivered an astonishing 112 league goals in just 138 appearances, winning the Premier League title and scoring 30+ goals in three consecutive campaigns – an achievement no other player has ever done more than once.

Shearer claimed two Golden Boots during his time with Rovers before adding a third in succession following a world-record move to Newcastle, a complete centre-forward and one who remains the benchmark.