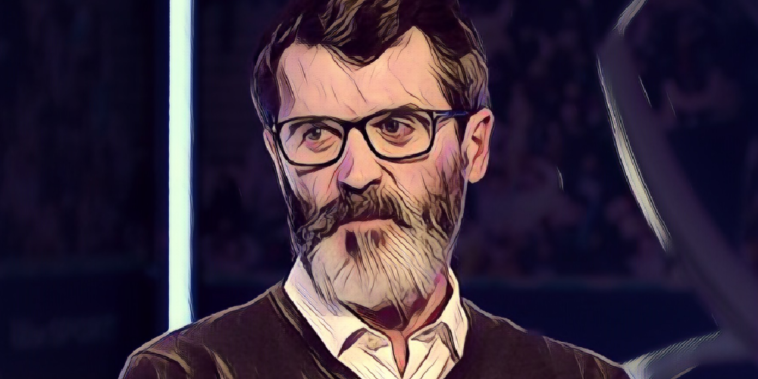 Roy Keane has had some memorable moments as a football pundit, from eviscerating modern footballers to cutting a whole country down to size.

In many ways, Roy Keane the pundit is similar to Roy Keane the player. He takes his job seriously, gets to the point without fuss, and is, shall we say, blunt.

The ex-Manchester United captain is good value for whenever he’s on the telly. He’s great entertainment and always produces quality sound bites, which is great for people such as yours truly. He’s pure box office, which is why Sky Sports have had him on a few times last season, especially when shit starts to hit the fan as his former club.

Covering the most recent Manchester Derby, he joined the cast of Gary Neville, Graeme Souness, and Joe Hart to pick over the bones of his former side in the aftermath of their 2-0 defeat to champions Manchester City. ‘Keano’ had a right go at the players, particularly Paul Pogba, for their dereliction of duty in recent months.

It made for great television, but it also showed why Keane is not a very good analyst. The viewer learned nothing new about why the team are in poor form of late, while his disapproval of the players’ lack of effort could have been said by literally anyone. He just happens to say it more viscerally for the cameras.

The player who once upon a time was known for his high standards, who swore he would never accept a cushy TV job, has transmogrified into the raging old man who shouts at clouds, decrying the mysterious ways of the modern footballer. Quite simply, he’s become a — cue dramatic music — Proper Football Man.

Just last year, Eamon Dunphy, ghostwriter for Keane’s first book, described him as a “good cabaret act”. I guess it takes one to know one.

‘If Liverpool were playing out in my back garden, I wouldn’t watch them’

After Liverpool defeated Maribor 3-0 in the Champions League group stages in November 2017, Keane stoked the ire of Reds fans with his post-match comments on ITV:

“It’s hard to figure out Liverpool at the moment. I think, it’s hard to get excited about them. To me, they are going nowhere fast.

“Again, they’re neat and tidy, but defensively… Come the end of the season when the prizes are being given out, Liverpool will be nowhere near them. because at the back there are question marks about the goalkeeper… There’s not too much to say about Liverpool.

“I think if Liverpool were playing out in my back garden, I wouldn’t watch them. They’re just drifting. Drifting nowhere.”

Roy Keane: "If Liverpool were playing in my back garden, I wouldn't watch them." (? @itvfootball)pic.twitter.com/3VsDPyTvHu

Liverpool did reach the final of the competition later that season, so he wasn’t exactly right when he said they would be “nowhere near” the prizes.

That same month Keane was in front of the media on Ireland duty, said that the comments were “tongue-in-cheek” and that anyone who got worked up about them should “lighten up.”

Perhaps that’s a good rule of thumb when it comes to Keane’s punditry in general: don’t take him too seriously.

Shutting down the England hype train

When everyone in England was getting excited last summer after beating footballing superpower Panama last summer in the World Cup group stages, Roy was there to put them back in their place:

“I wouldn’t try to be too clever. I’m kind of bored of the lads all night. England have already won the tournament according to these lads down there.”

Roy Keane's gone up in my estimation ???? #WorldCup #ENG pic.twitter.com/6imruKCg9x

In the post-match analysis of England’s semi-final defeat to Croatia in Russia, Keane took a shot at them across the water for getting too excited about just getting to the last four of the tournament. Ian Wright bit back, asking, quite fairly, “why shouldn’t we get excited about it?”

The two men had an astonishing back-and-forth in which Keane said Wright needs a “reality check”, before reminding him that he’s “a grown man”, while the ex-Arsenal striker started imitating the Irishman’s Cork accent.

I have to admit, I live for Wright’s reactions when he’s on air with Keane. Pure joy.

Raging at the ‘nonsense’ of modern footballers

Let’s be honest here: we all think Jesse Lingard is kind of annoying, right? The United midfielder acts like a bit of a prat, his Instagram videos being Exhibit A in this regard. That being said, I have zero problem with him unveiling a new clothing line the week of a big match, even if it carries the demonstrably hideous name JLINGZ. One can have interests outside of their profession, and it’s not something that would have harmed or upset the dressing.

Roy Keane, however, was having none of it:

Yes, the 26-year-old ‘apprentice’ was being lectured by a man who launched his autobiography the week of an important Ireland international for which he was assistant manager, and got into a scrap with someone over said book in the team hotel.

“Again, he could be the nicest kid in the world, I don’t know the lad. But if you are coming out with all that nonsense, people say you should have other stuff outside of football, I don’t think you should! I think football should be your number one priority. It should be. Focus on the game, don’t hide behind your cars, or your tattoos or your girlfriends or your agent, play the game.”

"Not this week!" ?‍♂o@GNev2 and Roy Keane question @JesseLingard's decision to launch a clothing line ahead of this week's clash with @LFC, saying football should be his only focus. ⚽

And this was all said on Lingard’s birthday of all days. His birthday, Roy. Have you a heart, man?

Jose Mourinho was let go by Manchester United not long after that 3-1 defeat to Liverpool back in December, and he had some harsh words for the players when he spoke to Adrian Chiles on BBC 5 Live about it:

“I do think the players get away with murder, the way they hide behind the manager. They’ve thrown him under the bus. People have said that Mourinho has been falling out with players…well you would fall out with them when players turn up overweight, or players aren’t training properly.

“Then for some of them to down tools… shame on them. I’m not Mourinho’s biggest fan, but I can’t tolerate footballers who hide behind their agents, or their friends in the media.

“People say I’m a bit old school; I call it good school. No matter what’s going on at your club, you go out and give it your all. The idea that these players may be a little bit upset…and it’s not just at United. The modern player, they aren’t just weak players, they are very weak human beings.”

Roy Keane, former #ManUtd captain, gives a scathing verdict on the players' behaviour over the Mourinho sacking, in an interview with Adrian Chiles.

"Shame on some of those players… The players get away with murder.”

“I can’t tolerate players that hide behind their agents.” pic.twitter.com/Z459MUrCYU

When you read that, you can’t help but wonder why Roy remains in coaching when he has such disdain for the very people with whom he’s working. It should also be noted this was all said a month after he and Martin O’Neill were let go from the Ireland setup, during which period he had an infamous fall out with both Harry Arter and Jonathan Walters.

As an addendum, I should add there were a lot of peak Roy Keane moments of punditry that I left out, but are equally deserving of a place in this list, such as the time he called the referee in the World Cup final “idiotic” for giving a penalty against Croatia for handball, or the time he called United players “cry babies”, or when he called Diego Costa “a bit of a balloon.” Alas, there is only so much time I can devote to researching one man’s descent into Yer Da territory.