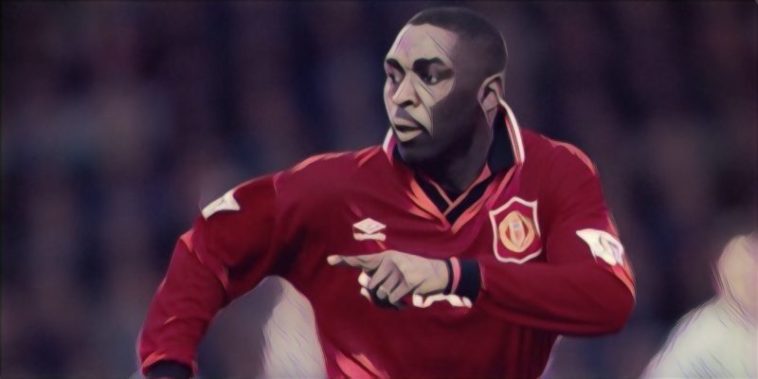 Former Newcastle, Man United and England striker Andy Cole is the latest inductee into the 90’s Football Hall of Fame.

After failing to make the grade at Arsenal, Andy Cole earned a move to the upwardly mobile Newcastle United in 1993. Scoring 12 goals in his first 12 games, the Magpies won the First Division and earned promotion to the Premier League.

The striker quickly became a star at the club, scoring 34 goals in his first top flight campaign. So good were his performances that he attracted the interest of a certain Alex Ferguson, who paid £6m for his services in a shock transfer midway through the 1994/95 season.

Although Manchester United did not win the title that year, Cole would go on to great success at club, winning the Premier League in five of the next six seasons, which included denying his former club the top spot twice.

Cole most famously developed a telepathic strike partnership with Dwight Yorke at United and together the two men shot the team to treble glory, scoring 53 goals in competitions between them. In 2001 Cole left Old Trafford for Blackburn Rovers, where he rekindled that famed link-up with Yorke and won the League Cup alongside another old teammate, Mark Hughes.

Although he was never at the same level again, turning out for a succession of so-called smaller clubs – Fulham, Man City, Portsmouth, Birmingham, Sunderland, Burnley and Nottingham Forest – he still possessed the ability to pull magic out of a hat at a moment’s notice.

The third all-time goal scorer in Premier League history, the striker famously rarely took penalties, with just one of his 187 top flight goals coming from the spot. He was also a supreme creator, making 127 assists in all competitions in his career.

Listen to the 90’s Football Hall of Fame show now:

In the latest episode of the 90’s Football Hall of Fame podcast, we discuss Andy Cole’s prolific career, why he’s more than the ‘fox in the box’ type he’s been pigeonholed as, and his best moments in the Premier League.

We also chat about his strained relationships with Eric Cantona and Teddy Sheringham, the time he had both his legs broken by Neil Ruddock, and his recent battles with ill health.

See Also: Asprilla could win a game on his own – if he was in the mood