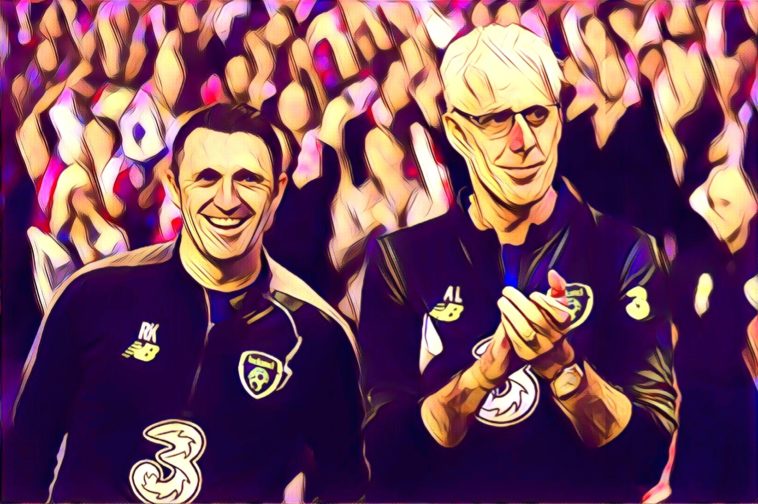 The Republic of Ireland have several promising and talented up-and-coming coaches that we expect to make waves in football management in the next few years.

After being on the decline for many years, Irish football is at a bit of a low ebb. Although Mick McCarthy has led the national team to the top of their Euro 2020 qualifying group after four games, the state of the game beneath the senior side does not paint a healthy picture.

Ireland is not producing the same quality of footballer that it did in the past, with fewer players able to make the breakthrough in the Premier League or even the Championship. It’s not just the globalisation of England’s top tier that has squeezed Irish hopefuls out, but also the fact that they are simply not coached to the required standard.

This country is lacking in qualified coaches that can bring on the next generation and give them the tools to succeed on the big stage. The prohibitive cost of gaining your badges is one obstacle to achieving, but there’s also very few well-paying jobs for football coaches here. Whether it’s working for the FAI or in the League of Ireland, it’s not life-changing money and not worth the trouble in going through all the necessary steps to get a Uefa Pro Licence.

There are, though, some notable names making their way through the choppy waters of coaching and management, and Ireland appears to have a number of promising trainers learning their trade. We’ve collated some of the most impressive up-and-coming ones here, with each one having started their senior career in the last five years.

We expect at least one of these men to be a future Ireland manager. No pressure, lads.

Ireland’s record goalscorer hasn’t been long out of the game, yet has made quick strides in his fledgling coaching career. Keane put in a call to his old boss Mick McCarthy when it was announced that the former Wolves manager would be taking over the Boys in Green again. The Barnsley man called him a “cheeky bollocks” for doing so, but the former striker got a spot on the technical staff nonetheless.

Keane was also just announced as Jonathan Woodgate’s assistant at Middlesbrough after the ex-Real Madrid defender replaced Tony Pulis as manager this week. Taking part in the FAI’s Uefa Pro Licence course this year, the one-time Liverpool forward has visions of becoming a future Ireland manager, and this move won’t hurt those ambitions.

Duffer’s career came to a slow and plodding end with a brief spell in the League of Ireland due to injury, but that allowed him to begin his coaching career with Shamrock Rovers’ youth teams. In the early days, he admitted to being clueless as to how to show wingers how to excel at the art of dribbling as he did, but he quickly got to grips with the job.

The former Chelsea player was brought in by the FAI to help coach the U-15 national team, before Celtic hired him for a coaching role in their reserve team. Last season Duff was promoted to first-team coach after Neil Lennon was brought in to take over from Brendan Rodgers. He is participating in the FAI’s Uefa Pro Licence course this year.

Read: Damien Duff opens up about his new role as Celtic youth coach

Another former Ireland international, Keith Andrews got his first coaching role at Milton Keynes Dons, before becoming a regular guest on Irish television and radio as a football pundit.

Now firmly focused back on coaching, the former Blackburn midfielder is acting as assistant manager to Stephen Kenny for the Irish U21 squad. He also had a brief role with the U17s, and with Kenny guaranteed to be Ireland’s next senior manager, Andrews could be in for a promotion next year too. He too is participating in the FAI’s Uefa Pro Licence course this year.

Read: Five young players Ireland fans should be getting excited about

Retiring just after his 42nd birthday, Shay Given has started his coaching career later than most retired footballers, but he could be in line for a job at a top Premier League club very soon.

The former Newcastle United goalkeeper is currently goalkeeping coach for Derby County, who lost the playoff final to Aston Villa last season. With Frank Lampard expected to take over at Chelsea, the Donegal is likely to follow him as part of the backroom staff.

Having retired in 2016, Andy Reid has become a part of the coaching setup in Ireland’s youth teams between then and now. The ex-Spurs player was working with the U18s since last year, but was promoted to head coach this past March.

Participating in the FAI’s current group for the Uefa Pro Licence, Reid also served as assistant first-team coach at Nottingham Forest for an interim period.

Few Irish coaches have been on the journey Jim McGuinness has been on, whose coaching career began in Gaelic football, where he won an All-Ireland with Donegal.

Despite that resounding success, McGuinness switched codes, having worked with Celtic on a part-time basis while still managing Donegal. He went from performance consultant to assistant manager of the U20s squad at the Glasgow outfit, as it became apparent that he was taking his soccer career very seriously.

The Irishman’s career path is not entirely unsurprising, considering he had previously managed a team in Limavady and briefly worked at Derry City FC, but his move to China certainly was. A few years ago he bumped into Roger Schmidt, manager of Bayer Leverkusen at the time, at a Champions League match, and met up at Dublin Airport to discuss football on another occasion. The German was suitably impressed enough to bring him along as part of his technical staff at Beijing Sinobo Guoan FC.

Although McGuinness was recently sacked by US outfit Charlotte Independence, he has already worked with the likes of Brendan Rodgers, Neil Lennon, Ronny Deila and Schmidt, and the chances are he has not finished with football just yet.

Once on the books at Middlesbrough, Gary Cronin was last year given the unenviable task of bringing some sense of on-field stability to Bray Wanderers, who had endured a rollercoaster couple of years up to his appointment, which included relegation.

The Dubliner has thus far done a good job with the Seagulls, getting his side playing a nice style of football while keeping in contention for promotion. Cronin received his Uefa Pro Licence in 2018.

The current UCD AFC manager has done a brilliant job of bringing through a bunch of talented young footballers at the club and developing them into terrific prospects, all while playing an attractive style of football.

Although O’Neill’s charges are unlikely to avoid the drop this season, a bigger job in Irish football surely beckons in the near future. He has managed the Students since late 2014 and earned his Uefa Pro Licence in 2018.

The Shamrock Rovers manager has gotten his fair share of flak for various comments he has made in the media, but he has gotten his team doing what few other League of Ireland clubs even attempt; playing the ball out from the back.

It’s taken a few campaigns and several missteps, but Bradley has finally brought Rovers to the point where they can challenge for the SSE Airtricity Premier Division title. They will likely fall short to the imperious Dundalk in that endeavour, but the manager’s methods are at least coming to fruition.

Read: Roy Keane wants to be a manager again, but does anyone want him?

See Also: Top five English clubs with most wins of all time