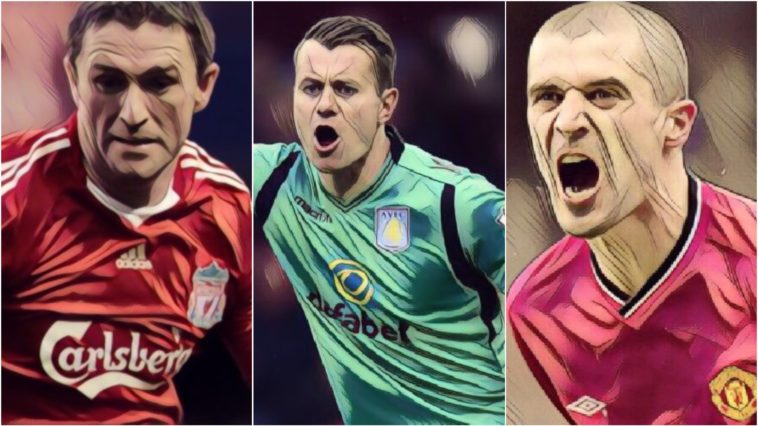 Ireland don’t produce top quality Premier League players like they used to, but there have been some greats down the years.

In fact, some of the very best Premier League players have been Irish, with a few having won major trophies for the division’s top clubs over the years.

On the latest instalment of The Football Faithful podcast, we decided to pick an Irish XI from the Premier League era, seeing as we’re in the middle of an international break.

Sam Steen hosted the conversation between Peter Henry, Colm Boohig and Ste McGovern, with the only rules being: chosen players had to both play in the Premier League at some point and for Ireland at senior level.

You can listen here:

One of Ireland’s most dependable players, Given will go down as the nation’s safest pair of hands ever. Although he never reached the upper echelons of the English game, and was deemed overrated by some detractors, defenders always felt safe knowing they had the Donegal native backing them up. His save from a Zidane free-kick was a particular highlight.

The most competitive position of all, at the right side of defence. We could have picked Gary Kelly, Seamus Coleman, perhaps even Steve Staunton. How come Ireland produce so many high quality full-backs? We don’t have the answer, but we’ve gone with Finnan, as he was the only player in this position to get more than one vote from the lads.

The Limerick man’s career started from the very bottom, coming from non-league football all the way up to the Premier League, obtaining Third, Second and First Division winners medals along the way. His Champions League win with Liverpool in 2005 ensures he is also Ireland’s most decorated player at right-back.

Finnan is also the only player to have played in the World Cup, Uefa Champions League, Uefa Cup, Intertoto Cup, all four levels of the English league football and the Football Conference.

A tremendous player in his day for both Liverpool and Aston Villa, ‘Stan’ was a stingy defender who could also play it out when the moment called, but he was also proficient at corner kicks. He even scored directly from a corner kick — twice. The first came in a friendly against Portugal in Boston, USA in 1992, while the second was against Northern Ireland at Lansdowne Road in 1993. The 3-0 win that day put the Republic well on their way to qualification for the World Cup.

At the tournament itself, the image of Staunton that has lasted long in the memory is of him wearing a cap wherever he went, even in the line-up for the national anthems (above), looking every bit the Irishman abroad.

After a tense relationship with Alex Ferguson dissolved in 1989, “The Black Pearl of Inchicore” moved from Manchester United to Aston Villa for less than half a million pounds. McGrath would go on to win the PFA Players’ Player of the Year in 1993, as well as two League Cup winners medals and the club very nearly won the league in his first season there. He was also excellent in midfield.

One of Ireland’s all-time great players, Irwin was a master of set pieces and reliable as anyone in defence. The Corkman won seven Premier League titles with Manchester United, as well as the Champions League and European Cup Winners’ Cup during his time at Old Trafford. He also togged out for Ireland at USA ’94.

As described by Colm Boohig on the podcast, Houghton was the ultimate “moments player”, popping up with winning goals against England at Euro 88 and Italy at the 1994 World Cup. There are Ireland players who have had better Premier League careers, but few possessed his talent. Capable of playing in the middle of the park or in the ‘hole’ behind the strikers, but for the purposes of this team he slots in one the right side.

An oft derided figure these days for his punditry work with ITV, Townsend was one of Ireland’s best performers during his eight year long international career, appearing at two World Cups. Figuring in that great Villa team that won two League Cups alongside McGrath, Staunton and Houghton, he was also a top player for Chelsea in the early nineties.

Read: Why there’s no need to lose the head over Declan Rice’s IRA post

There’s almost nothing left to say about Keane, a man who has been one of the most talked about figures in the history of sport, never mind football. His sporting legacy is secure though, despite how often he chooses to tread all over it with his growlings in the media.

A prodigal talent from a young age, there have been few players gifted with more natural talent than Duffer, if any. Capable of playing on the wing or just behind the striker, he had a mesmerising ability to beat a man and thrill crowds at Lansdowne Road. Perhaps left Chelsea too early after playing a big role in their winning two Premier League titles, but he reinvigorated his club career at Fulham where he played in a Europa League final.

Currently coaching at Celtic, Duff’s best performance for Ireland arguably came in the 2002 World Cup against Spain, where the Boys in Green lost on penalties after drawing 1-1.

Ireland’s record goalscorer until a certain diminutive forward came along, Quinner famously developed a brilliant “little ‘n’ large” relationship with Kevin Phillips at Sunderland, something he would replicate at international level. A League Cup winner with Arsenal in the eighties, Ireland also never lost whenever Quinn scored, curiously enough.

Ireland’s record goalscorer with 68 goals, a tally that will surely never be beaten, there was never any doubt about the Tallaght native’s place in this XI. The best years of his career were spent at Spurs, where he scored 122 goals across two spells at White Hart Lane. His “boyhood dream” move to Liverpool turned out to be a bust, but he will always be remembered by Irish fans for his late equaliser against Germany in the 2002 World Cup. That, and a myriad of other memories he created.

So there’s our team, lining up in 4-4-2 formation, because how else would they line up:

Do you agree with our team? Who would you put in your all-time Premier League Irish XI? Make your own team with the lineup builder, screenshot it and send it to us on Twitter.