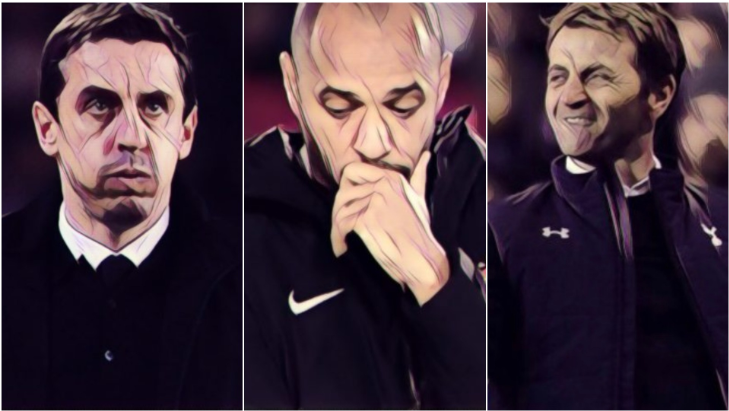 Thierry Henry’s terrible term in management last season reminded us of some other great players who couldn’t make it as managers.

In retrospect, maybe AS Monaco shouldn’t have given one of the biggest jobs in French football to a man with zero experience as a manager.

Sure, Thierry Henry has experience in coaching Arsenal’s youth teams and as an assistant to Roberto Martinez with Belgium. But as the head honcho? Not an ounce of first-hand knowledge what it’s like to take charge of a senior team.

So it’s not that all that surprising that Henry was sacked just three months into his reign, winning a grand total of five games in all competitions.

Arsenal’s record goalscorer isn’t the first person to get a job in football on the back of his playing career or links to a club and he certainly won’t be the last either if recent times are anything to go by. Let’s take a look at some terrific players who ended up failing miserably when they moved to the bench.

A disaster from top to bottom, Gary Neville’s first foray into management could hardly have been further removed from the success of his playing days.

The former Manchester United defender was the surprise successor to Nuno Espirito Santo at Valencia in December 2015, getting the job on the back of business connections to the club’s owner, Peter Lim, who had already employed his brother Phil as a coach.

It took Neville over two months to get the first of just three LaLiga wins during his time in Spain, which ended in March with the club just six points above the relegation zone.

WATCH: Jamie Carragher had been waiting six months for this! What did Gary Neville learn from his time at Valencia? https://t.co/3uV58xGlHx

Neville has since admitted he will not go back into management following this experience, preferring the less strenuous environment of the Sky Sports studio.

Tottenham Hotspur were lucky in that Tim Sherwood’s short time as manager was not disastrous for the club, but Aston Villa cannot call themselves so lucky.

A Premier League winning captain with Blackburn Rovers, the gilet-fitted coach got the main job at Villa Park after benefiting from a new manager bounce with Spurs, whom he took charge of temporarily following the sacking of Andre Villas Boas in 2014.

Everything went well at first: Villa avoided relegation, Jack Grealish was elevated from the academy to the senior squad, and they even reached the FA Cup final. The next season, however, went sideways and Sherwood was sacked in October 2015 after losing six consecutive games.

Just think, Southgate went waistcoat and Sherwood went gilet. The margins between success and failure are that small. pic.twitter.com/UMZ4LbFdZq

The Villains still haven’t recovered from a campaign in which they were relegated from the top flight, remaining in the Championship ever since.

Sherwood’s time at Swindon Town was even more disastrous, but never lacked for entertainment. Installed as Director of Football in November 2016, he immediately undermined the authority of the manager by sitting in the dugout and appearing to manager the team himself during the side’s FA Cup shock defeat to Eastleigh.

He was then given a two-match stadium ban for this foul-mouthed rant at a referee, as reported on by the official himself:

“After the half-time whistle, and as I was walking down the tunnel, Tim Sherwood of Swindon Town approached me and said: “you’re the only fucker in the ground that’s fucking seen it, you fucking mug.”

“He then started pointing aggressively in my face. I told him to calm down and stop pointing at me or he would be sitting in the stands for the second half.

“He then continued: “I wasn’t even in the dugout, you fucking mug, and you would be doing me a favour”.

“I told him I wanted to speak to him at my dressing room but he ignored me and walked off towards the Swindon changing room.

“I followed him and stood outside, and told the coaching staff I wanted Mr Sherwood to come outside as I needed to speak to him.

“After approximately 45 seconds, Mr Sherwood walked out and walked past me, and I informed him that he would be reported for his comments towards me. His reply was: “fuck off, you mug”.

“I then entered my dressing room area and informed the stewards of my decision, and that if Mr Sherwood tried to come down into the technical area, he should not be allowed.”

When Joe Kinnear had to step down as Newcastle United manager following heart surgery, Alan Shearer was the surprise replacement, taking up his first job in management at his old club.

The Premier League’s record goalscorer said he was “do everything I can to stop” the Magpies from dropping down a division, but I guess being a Newcastle legend isn’t enough of a qualification to manage a team in a relegation battle.

Shearer’s only win came against Middlesbrough, who they beat 3-1, before returning to the sanctuary of the Match of the Day studio.

The diminutive forward was a legend in his playing days, not just at Chelsea, but for Parma and Napoli too, the latter of which he helped to a historic league title in 1990.

As loved as he was as a player, Gianfranco Zola’s managerial career will go largely forgotten by the football following public, aside from the fans of those sides he managed to mediocre, and sometimes downright awful, results.

The Italian avoided relegation in his first job by a mere five points in 2010 with West Ham United, who sacked him shortly thereafter. Watford was arguably his best performance in the dugout, winning 44% of his games, but he was unfortunate to have the trigger happy Giampaolo Pozzo for an owner.

Zola’s last spell as a manager, taking over from Gary Rowett at Birmingham City in 2016, was a complete train wreck, guiding the Midlands club from mid-table to the threat of relegation to the third tier after winnning just two of 24 games in charge.

There’s a very good reason why Tony Adams’ managerial career features three clubs over a twelve year period – he’ really bad at it.

After 82 games as a manager, the former Arsenal defender has won just 16 of them, leading Wycombe Wanderers to relegation along the way.

Adams’ last role as caretaker manager of Granada in 2017 also saw him become a meme, so at least something good came out his winless streak with the Andalusian club.