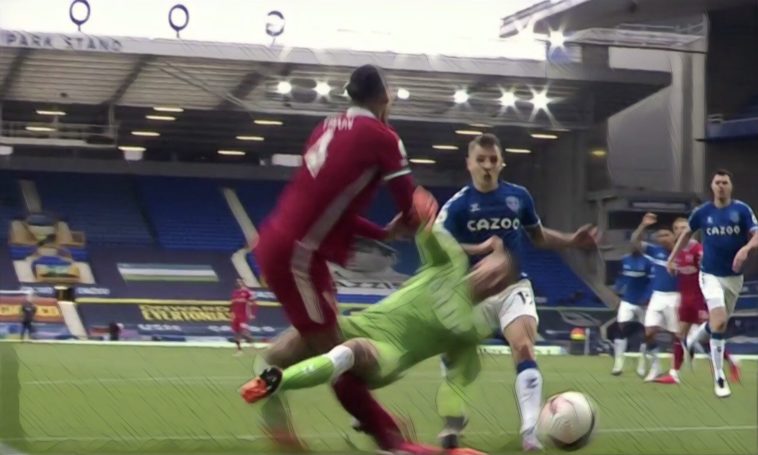 The funniest tweets from the world of football this past week, featuring Jordan Pickford’s cruncher on Virgil van Dijk, Liverpool ruing VAR, Colin Farrell in his latest role as a former Premier League manager, and Gunnersaurus finding a new career.

Pickford started Saturday’s match as he meant to go on…

… and then potentially ended Virgil van Dijk’s season before the half was over with a dreadful ‘tackle’.

Next offside someone should break Pickford’s jaw

Patrik Berger: The highs and lows of Liverpool’s Czech mate

The officials and the VAR had a bit of a mare in general.

Welcome to the Premier League. pic.twitter.com/HUxEqXLnSb

But non-Reds were only delighted with it.

A harsh, yet not entirely inaccurate analogy of Frank Lampard’s management this season.

Do you know that kid who gets his parents to buy him Fifa points so he can have a great Ultimate Team yet still be complete shit at the game? That is Frank Lampard

Why Frank Lampard needs to take responsibility for Chelsea’s shortcomings

I’d pay to see this.

Colin Farrell is playing George Graham in The Batman. https://t.co/qwsNxUlXGH

Great to see Gunnersaurus take on board the UK Government’s advice following his sacking.

Gonna slip this in here #FIFA21

Stat of the week, this:

More Yorkshiremen have scored a hat-trick for Norway today than for England in the last 62 years (Tommy Taylor was the last in 1957). https://t.co/loathuJXjo

The best Caribbean-born footballers to play in the Premier League

There’s a moose loose in this video.

Need to offload a player? Give Notts Forest a call.

The most top six finishes in English top flight history

3 points on the road (legal ones) 🔴⚪️ pic.twitter.com/bxD3dlmzis

Deleting the tweet @journeyspod ? Come off it lads… use left the best part out of the clip “Mission Accomplished “ 😂 lucky to walk away from that tackle with my leg in one piece 👍🏼 pic.twitter.com/TG0Ix02xf6

Read: Why an unlikely trio of clubs are in the reckoning for a title tilt

See Also: Six Premier League players set to take their game to the next level