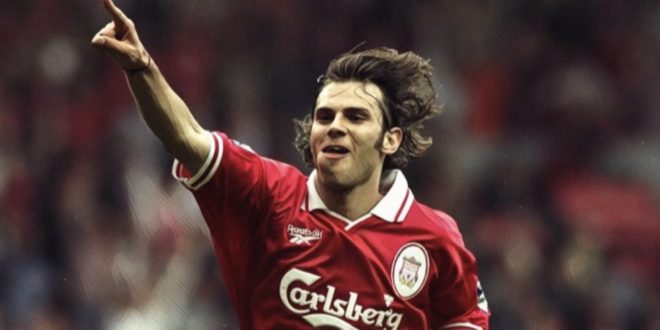 Patrik Berger: The highs and lows of Liverpool’s Czech mate

When Euro 2021 finally starts, it will be 25 years since Patrik Berger graced Anfield for the first time in a national shirt.

The 2001 FA Cup final brings back joyful and painful memories seen through different prisms. Almost two decades later, Arsenal fans will still wince at how their team managed to lose given the amount of chances they had to walk the ball into the net. Even allowing for Stephane Henchoz’s goalkeeping skills, there was only one team playing real football for 80 minutes

Like all three finals they played in that memorable treble year, Liverpool managed to hang tough to win. Michael Owen may have grabbed the headlines with his two late strikes to secure the trophy, but the assist for the winner was something else. Remember the dreamboat pass that dropped in between Arsenal’s creaking senior security, Lee Dixon and Tony Adams, for Owen to put the turbo boost on?

That was Patrik Berger’s work in his last big moment as a Liverpool player.

Berger caught the eye during Euro 1996, roaming a super talented midfield for the Czech Republic. He even put the Czechs into the lead in the final against Germany with a penalty, before he and his compatriots ultimately lost 2-1 after extra time to a golden goal. At least Liverpool’s new number 15  didn’t have to go through the pain of a shootout like the hosts had just days earlier.

“Paddy”, as he was affectionately known, was almost the most popular Czech ever to play for the club. Vladimir Smicer, another less celebrated member of the squad, may have beaten to him to that special place by dint of that goal in the Champions League final against Milan.

Even so, Berger certainly hung around longer than his compatriot Karel Poborsky, the bigger tournament “star” of 96 who went to Old Trafford only to be drowned out by the rise of David Beckham’s better hair and skill. Berger was snapped up by Roy Evans for a modest £3.25 million from a title winning pre-Klopp Borussia Dortmund where he was used as a more defensive presence.

With the Spice Boys of the club still out in full force, some may have baulked at an alice band wearing Eastern European adding to the ranks.

However, any doubts about his ability to adapt to the Premier League were soon silenced as the 22-year-old came flying out of the blocks at Filbert Street in September.

Ten minutes into the second half, he found himself in space after a lay-off by Steve McManaman and buried it past Kasey Keller with a lethal swing of the left foot. It was like the equivalent of the perfect golf swing when he wound up on that side. In fact, Steven Gerrard once said the winger was the “best left-footed striker of a ball I have ever seen.” The floppy-haired one followed a brace against the Foxes with another against Chelsea before things levelled off.

Despite a hat-trick against the Londoners in a 4-2 win the following year, the circumstances had changed somewhat. Roy Evans damned him with faint praise in the post-match interview: “Patrik’s threatened to do that from the day he came back into the side. He’s been making good runs, but they just haven’t come off. I’ve always felt that, once he got one, the floodgates could open, because he’s a natural scorer with great feet, talent, and an eye for goal.”

Evans struggled with the balance needed between the attack-minded McManaman and Berger in the same team. There was a sense of entitlement about the Czech’s swagger based on increasingly limited returns and things subsequently turned a bit sour as the manager publicly derided the player for not pulling his weight .

At one point, it looked certain he was heading out of the club altogether when refusing to be a substitute against Bolton. The player insinuated later that he wanted to join his old mate Poborsky, who was now at Benfica under the gentle stewardship of, ahem, Graeme Souness.

When the new French evolution of Gerard Houllier arrived after severing of a doomed joint venture with Evans, it salvaged the situation. Berger had been less than impressed and shocked by the club’s structure and training which he called akin to a “second or third division team”. Houllier was the man to modernise the approach beyond the Boot Room™ and convinced his charge that he had a place in his new vision.

The 1999-20 campaign coincided with some of his best football, given that he had the liberation of playing without fear of deselection. There was an exotic sense of adventure about his powerful, surging runs down the wings and the laser-like eye for goal from beyond the 18-yard box. It was more of the verve and sway in his play that had excited the Kop in the early days. There was also a magnificent 35 yard free-kick against Manchester United which is always a useful legacy as well as a decisive goal in a five goal Merseyside derby.

A horrific knee ligament injury broke Berger’s stride in that memorable 2000-01 season and a series of niggling knocks meant that he faded from the first team in his last three seasons.

Overall, his stay at the Reds yielded 35 goals in 196 matches before he was moved on to Portsmouth. Fittingly, he scored the winner in 2003 against Houllier’s men at Fratton Park.

The love for the club remains real and strong: “When I moved to Southport to live, my neighbour was Kenny Dalglish. Alan Hansen lived around the corner. I met them, they were normal guys, but they were my heroes.”

Berger is a regular on the Liverpool Legends tours and somehow it is fitting that he looks the most youthful of them all.