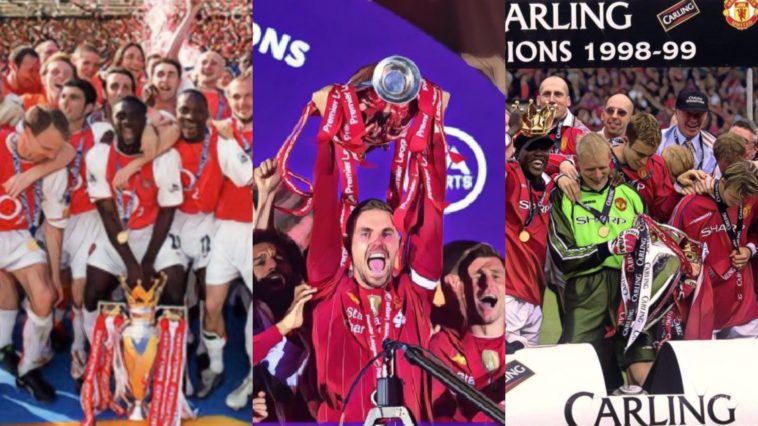 Until fairly recently, being a ‘top six’ team wasn’t really a thing. It wasn’t even considered all that impressive unless you were a so-called lesser club.

Now there’s a ‘Big Six’ who supposedly hold a grip on that part of the table, although Leicester City upset that particular apple cart in 2019/20.

We’ve gone back through the history of the Football League and Premier League to see which teams have placed in the top six more often than anyone else – and ponder if this is the true Big Six.

Two of the current big guns – Manchester City and Chelsea – don’t even make the cut, coming in at 30 and 35 top six finishes respectively.

The most top six finishes in English top flight history:

Considered something of a laughing stock for the lack of bottle and winning edge during the Premier League era before the Poch revolution, Tottenham Hotspur have actually been something of an ever present in the upper echelons of English football. That said, they have only won the title twice in their history.

Squeezing ahead of Chelsea thanks to last season’s surprise sixth-placed finish, 30 percent of Spurs’ top six finishes have come in the past decade thanks to 11 straight seasons in the top six. Following a good start to the 2020/21 campaign, they are looking good to keep that run going.

David Ginola: The definition of a scorer of great goals, but not a great goal scorer

They fell on hard times in more recent years, but Aston Villa have frequently contended at the upper end of the table. In their first twelve years in the first tier of the Football League, they finished in the top six on ten occasions, winning the league five times.

Although they have only won the league twice since then, the last coming in 1981, they have regularly competed for European qualification in the Premier League era. Ten times they have finished in the top six since the 1992/93 campaign.

Another heavy hitter in the days of yore, Everton’s most successful period is far behind them, but they have been the Premier League’s perennial “seventh-best team” for a long while now.

One of only six teams not to be relegated from the top flight since 1992/93, the Toffees have finished inside the top six on seven occasions since then. They have also won the title on nine occasions in their history, the fourth most of any English club.

Neville Southall exclusive: Everton will be expected to win the league this decade

Unsurprisingly Manchester United are very high in the all-time list, but it is somewhat surprising that they aren’t in the top two. Nonetheless, their 58 top six finishes are very impressive.

20 of those have seen them win the league, the most of any English club, with the most recent coming seven years ago. Although they haven’t been nearly as dominant since Alex Ferguson retired, they retain their place among the so-called Big Six.

Norman Whiteside: The boy from West Belfast who played keepy uppies on the White House lawn

They may have finished outside the top six last season for the first time since 1995, but Arsenal’s top-flight record is still incredible.

The Gunners have spent 98 consecutive seasons in the first tier, the longest run of any English club, and have finished in the top six on 59 occasions since then. That’s a whopping 60 percent of their total campaigns since the end of the First World War. They have also won the league 13 times, the third-most of any club.

Ten of the best quotes about Arsenal legend Tony Adams

Naturally enough, Liverpool top the list for top six placements with 63. Having spent 105 seasons in the top flight (and just 11 in the tier below), the Reds have been a near constant presence at the top of the table during their illustrious history.

Their 19 league titles are bettered only by Man United, and they looked well positioned to add to that in the near future. In 28 seasons of the Premier League, they have finished sixth or higher in 22 of them.

Read: Thug or leader? The complicated legacy of Dennis Wise