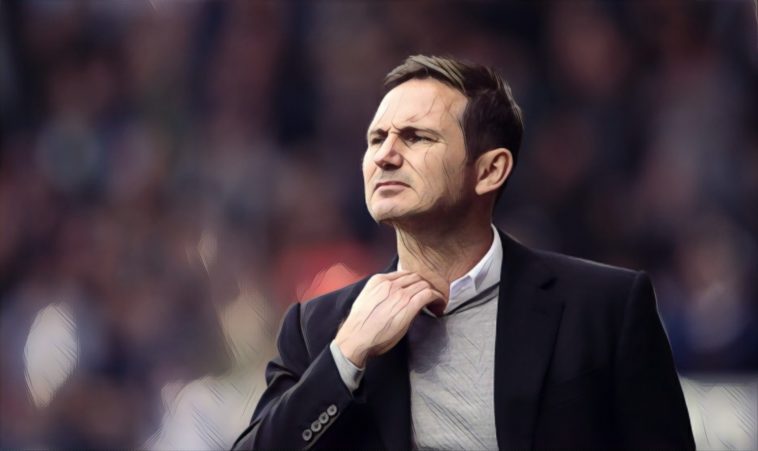 There was a moment last Saturday when Chelsea were losing 3-0 to West Brom in the first-half where Frank Lampard was sat firmly on the bench, staring out into the oblivion with a deeply uncomfortable look on his face.

What he was thinking in that moment is anyone’s guess, but it went on for a while. Perhaps he was in deep thought as to how to fix what was going awry at the interval. Perhaps he was stewing over the performance that led to this deeply embarrassing scoreline, wondering why me? Why is this happening to me? Or perhaps there was just nothingness, and a mild form of snow blindness took over him momentarily.

Even the keen-eyed Jose Mourinho noticed, scolding his former player during a verbal spat on Tuesday when Spurs and Chelsea faced off in the League Cup. “F*cking hell, Frank, when you’re losing 3-0 you’re not standing up here,” Mourinho snappily pointed out to him.

Frank’s side did at least rescue a point from an absolutely disastrous situation last weekend, drawing 3-3 in the end, but in no way, shape or form should they have been in that position in the first place. For Chelsea it’s two points dropped, but for Lampard the excuses have surely run out.

No more “but Chelsea had a transfer ban!” “They sold Eden Hazard!” “He doesn’t have the players!” “He has Kepa in goal!”

This time, Lampard has to look in the mirror and ask himself if he is in fact the problem with this team after a calamitous display against a side expected to go straight back down to the Championship.

That performance followed on from a poor display against Brighton and one decent half against Liverpool, which all adds up to a very worrying start for the Blues. Against the Baggies Lampard tried out his third different formation in three games, although it was difficult to discern what exactly it was given the weird team shape.

As ever, the former England midfielder positioned his full-backs high up the pitch while also fielding four attackers, leaving the centre-backs and midfield double pivot to fend for themselves. Giving Thiago Silva the armband on his debut was a strange enough choice; pairing him with another slow defender in Andreas Christensen while employing such a strategy was pure insanity.

In a bid to claw back the three-goal deficit, Lampard ended up throwing all of his attackers onto the pitch. With Timo Werner, Tammy Abraham, Olivier Giroud, Mason Mount, Kai Havertz and Callum Hudson-Odoi all on the pitch at the same time, the full-backs were required to retreat in order to cover at the back. By removing the ball progression and attacking threat Reece James and Marcos Alonso were providing, this essentially cancelled out any gains made with extra attackers.

Surely this result will inspire some introspection from the manager, forcing him into a period of reflection and self-examination, maybe even some soul-searching thrown in for good measure? Judging by his post-match remarks, it seems unlikely.

“You can’t legislate for clear mistakes, which they were today,” a point he reiterated just two sentences later to put the onus firmly on his players instead of him.

“You can have as many meetings as you want but with those mistakes you give yourself a mountain to climb.” And who is taking those meetings, Frank?

“There was nothing tactically you can analyse again and again – there were just pure mistakes.” Nothing? Really? Alarm bells should be ringing for Chelsea fans, because it’s not as if this performance taught us anything we didn’t already know.

Last season they conceded a monster 79 goals in all competitions, 54 of which came in the Premier League – the most of any side in the top half of the table. They let in 1.42 goals every 90 minutes in the league with an average save percentage of just 54% between both Kepa Arrizabalaga and Willy Caballero. Unsurprisingly they saved the least amount of shots, too (65).

This is despite the fact that their underlying defensive numbers are actually decent, on the surface at least. They conceded the lowest amount of shots on target (115), behind only Man City and Liverpool, and had the fourth best expected goals against (37.9 xGA).

Chelsea were also the joint-fourth most successful team at pressing an opponent on the ball last season, gaining possession from 31% of attempted pressures. This gives them the opportunity to create chances by winning the ball high up the pitch, but as alluded to earlier, when you have so many attacking players on the pitch it can lead to a higher quality of chance down the other end as well.

Chelsea don’t concede a great deal of chances because they have the ball so much, but when they do give opportunities away it can have catastrophic consequences – particularly when you have a below average goalkeeper in net – as seen at the Hawthorns. The players obviously have to take personal responsibility for their mistakes, but at a certain point, they will stop appreciating a manager who repeatedly throws them under the bus.

The south west London outfit’s poor start to the season was compounded on Tuesday night following League Cup elimination via penalty shootout against Spurs. It was a match in which they had the majority of the possession and chances, but, a Timo Werner strike aside, never looked at the races. The most interesting moments in the game were Eric Dier sprinting for the toilet and the aforementioned row with his counterpart on the touchline.

Journalists at the game reported that after the encounter he headed back to the bench with a wide grin on his face, smugly satisfied with himself as if he was some nameless incel who had just ‘pwned’ a snowflake social justice warrior on Twitter.

Some supporters lap that kind of thing up and laud their manager for ‘putting it up’ to Mourinho, just as he did to Jurgen Klopp in July, but it won’t impress anyone beyond what you might call his core base. It’s also not the kind of victory Roman Abramovich is looking for, either.

14 months ago Frank Lampard’s Chelsea™ began the season with a crushing 4-0 defeat to Man United before turning things around to enjoy a decent season. Will the club legend-turned-anointed-one even get a chance to do the same this time around?

Read: Why Solskjaer’s legendary status is becoming a serious problem at Manchester United

Absolutely spot on, been saying this to me mates. He’s behaving like an idiot. Other managers need to put him in his place.