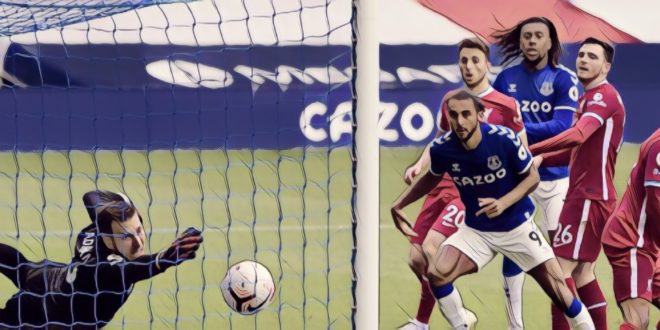 Dominic Calvert-Lewin maintained his record of scoring in every Premier League game so far this season, by netting a late equaliser as an incident-packed Merseyside Derby finished 2-2 at Goodison Park.

Jurgen Klopp’s defending champions got off to a perfect start on three minutes when Sadio Mane hammered a low Andy Robertson delivery into the roof of the net.

The Reds looked razor-sharp in the opening exchanges but their positive start would be stunted after a moment of massive controversy in the seventh minute. Liverpool midfielder Fabinho floated a ball to the back post and as Virgil van Dijk tried to meet it, the Dutch defender was poleaxed by Toffees goalkeeper Jordan Pickford.

Replays showed Pickford’s attempted tackle to be a horror challenge, but no action was taken against the England ‘keeper as replays showed that van Dijk had been marginally offside when the cross had been played into the area. Liverpool fans – already upset that their side had not been awarded a penalty – then had to watch defensive lynchpin Van Dijk be substituted off, and judging by footage of the incident, the 29-year-old may well be facing a spell on the sidelines.

Everton began to grow in stature and would equalise on 19 minutes when centre-back Michael Keane rose highest to power home a wonderfully delivered corner from classy Colombian playmaker James Rodriguez.

Both sides looked dangerous going forward as the game entered the second-half, although it would be Liverpool who would retake the lead on 72 minutes, Mohamed Salah notching his 100th goal for the Reds with a superb snapshot from 14 yards out.

Carlo Ancelotti’s side refused to bow down though and man of the moment Dominic Calvert-Lewin restored parity with 10 minutes left to play, the young striker rising highest to nod home a trademark header from an excellent Lucas Digne cross.

The drama didn’t stop there though and in the 90th minute Everton’s Brazilian attacker Richarlison was given his marching orders for a high lunge on the Reds summer signing Thiago Alcantara.

Liverpool skipper Jordan Pickford then thought he’d snatched an injury-time win for his side two minutes, only to see his left-footed effort ruled out due to one of Sadio Mane’s armpit hairs being offside in the build-up.

Dominic Calvert-Lewin is the first player from Europe’s top five leagues to score 10 goals across all competitions in the 2020-21 season.

Speaking afterwards Calvert-Lewin admitted it had been a dramatic derby day on Merseyside and revealed that although a point is a good result in the grand scheme of things, he felt his side could have pushed on and won the game.

“Yeah very strange [ending],” he told BT Sport. “As you expect in a derby you have tackles flying in and it’s physical. There is always a chance the referee might bring out a yellow or a red [card].

“In the end yeah [I’m happy with the point] but disappointed we didn’t kick on at 1-1. We knew we’d go through spells without the ball but I’ve had chances where I’d back myself to put the ball away. I thought today would be the day we did it [and ended winless derby run] but it’s on to the next one.

“I’m disappointed we didn’t win the game and I know the fans are too. It’s frustrating but in terms of the bigger picture we got a point, we take it and we keep building. We want to keep that unbeaten run going and building towards that bigger picture at the end of the season.”

Regardless of what happens in the other games this weekend Everton will remain top of the table and face an away trip to Southampton this day next week.

Read Also – Strange days: Why Everton, Leicester and Spurs are in the reckoning to win the Premier League