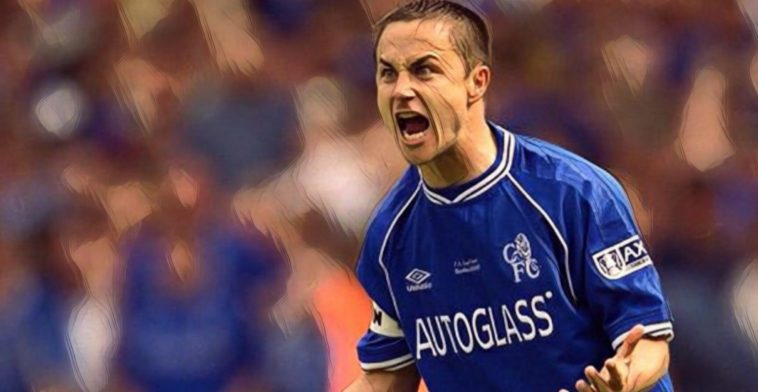 The reputation of Dennis Wise would have him pegged as a violent thug, a pure breed shithouse with an unquenchable thirst for blood – and it’s a well-earned reputation, too.

At just 1.68 metres tall, the pint-sized midfielder was short but tenacious, tougher than most players twice his size. He didn’t back away from anyone and was never afraid to make a challenge, receiving 75 yellow cards – and that was just in the Premier League.

Teammates and supporters loved his willingness to get stuck in, but it got him in trouble more than once. In 1995 he was sentenced to a three-month prison term for assaulting a taxi driver. Although he avoided time behind bars thanks to a successful appeal, he was stripped of the captaincy by then Chelsea manager Glenn Hoddle.

Wise once put a chokehold on Wimbledon teammate Vinnie Jones, a misguided action at the best of times, never mind when the receiver is driving a vehicle. He famously pinched Nicky Butt’s groin during a match against Manchester United, although this example demonstrated his sly cleverness, as Butt was red carded for retaliating while the Chelsea man got off scot free.

On many an occasion he displayed more brawn than brains, however. While at Leicester City he broke the nose and jaw of teammate Callum Davidson during a heated argument. For this he was rightfully sacked by the club and he never played in the top flight again.

By any measure, this was a player with serious temperament and impulse control issues, liable to do damage to other people, even his own colleagues. And yet he was Chelsea captain for almost eight years. He was talented enough and garnered sufficient respect to be trusted with such responsibility.

It was during his tenure as captain and one of the dressing room’s big leaders that the club embarked on a glorious run of success, winning six trophies in four years including the Uefa Cup Winners’ Cup. He transitioned from being a wide attacking midfielder in his early years to being a hard working central midfielder for the Blues.

Wise won 21 England caps, which is not to be sniffed at considering the competition for his position during that period. He certainly benefited from English football’s mistrust of mercurial talents, but he was still there on merit, playing every one of England’s matches at Euro 2000.

For football writer Ste Tudor these incidents are abhorrent, but completely overshadow what was a terrific career on the field.

“How much his reputation defined him (fascinates me), because we’re talking about his antics and what he got up to, but he was a bloody good footballer, he really was,” Tudor said on the 90’s Football Hall of Fame podcast.

“He scored 14 goals in his second season for Chelsea, that is Lampard-esque. He created, he scored in all the big games. He was man of the match in the first FA Cup final (in 1997) for Chelsea. He assisted in the Cup Winners’ Cup final and was one of the standout stars in that game.

“He always brought it in the big games. In esteemed company, he was the man, so all credit to him for that.”

The most Dennis Wise team talk ever – and he gave it to a bunch of teenagers.

Earlier this year John Terry revealed a very telling anecdote about his former clubmate. Terry told The Footballers’ Guide to Football Podcast in June that Wise admonished the then-19-year-old for buying a fancy new motor after receiving a big bonus in his pay cheque. He got the message across by grabbing the youngster by the neck, but followed it up by giving him sage advice; don’t waste your money on flash luxuries, invest in property to set yourself up for life instead.

For his part, Wise denies ever grabbing the centre-back by the throat, but whether it’s 100% accurate isn’t really the point. There’s a general truth in that story that reveals his leadership skills. After all, there’s a reason why he’s Chelsea’s fourth highest appearance maker and second-most successful captain. You might be able to guess who number one is.