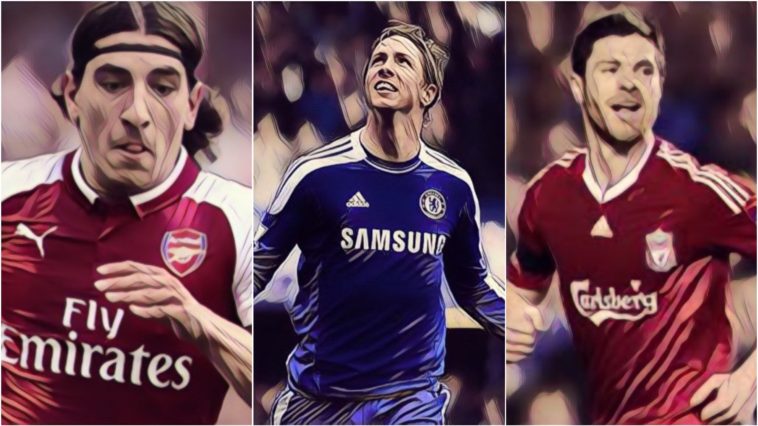 In recent times, few nations have consistently produced players of such quality as Spain. Major tournament winners in 2008, 2010 and 2012, the Spanish have proven themselves amongst world football’s elite.

Over 100 have appeared in the Premier League since its inception in 1992, so fitting the very best Spaniards into an XI proved rather difficult.

Not only the Premier League‘s greatest Spanish goalkeeper, but perhaps the greatest of any nationality to ever play in the competition.

The Manchester United goalkeeper has established himself as arguably the world’s finest during eight years in English football. A title winner in 2013, the 28-year old has been a consistent performer during United’s transition in the often difficult post-Sir Alex Ferguson era.

Regarded highly by his peers, De Gea has been named in the PFA Team of the Year on five occasions.

See Also: Every goalkeeper to have reached 100 clean sheets in the Premier League

Plucked from Barcelona’s academy as a teenager, flying full-back Bellerin has shone since being given an opportunity in North London. The 23-year-old has made over 140 appearances at The Emirates, and has twice won the FA Cup during his spell at Arsenal. He was named in the PFA Team of the Year in 2015-16, and has since earned three caps for the Spanish national side.

Chelsea‘s Mr. Dependable, the defender affectionately nicknamed ‘Dave’ has been a mainstay of recent successes at Stamford Bridge. Signed from Marseille for a bargain £7m in 2012, Azpilicueta has since formed a reputation as one of the Premier League’s finest defenders.

Capable centrally or at full-back, the 29-year-old has won every domestic honour at Chelsea, as well as European success with a Europa League triumph in 2012-13. He was named Chelsea’s Player’s Player of the Year in 2013-14.

Okay, we’re clutching at straws a little with this one as the Barcelona defender made just 12 league appearances at the Salford club.

In truth, competition at centre-back was not the greatest (Carlos Cuellar or Chico Flores anyone?), so we decided to plump for a defender who went onto be one of the world’s finest.

It may not have been in the Premier League, but it still counts.

When Chelsea announced the £24m signing from Fiorentina of former Bolton and Sunderland full-back Alonso, there were more than a few heads being scratched. Having failed to impress during his previous spells in English football, few would have envisaged the Spaniard becoming a vital component of a title winning team.

Based at left wing-back in Antonio Conte’s 3-5-2 formation, Alonso thrived at Stamford Bridge, chipping in with six goals as Chelsea won the title in 2017-18. He followed up the following season with another seven strikes, helping the club to an FA Cup success and being named in the PFA Team of the Year. That’s more than enough to beat Alvaro Arbeloa to our left-back spot.

One of the finest passers the Premier League has season, Alonso would go on to become one of the greatest midfielders of his generation. Signed by Rafael Benitez as a 22-year-old in 2004, the playmaker would lift the Champions League, scoring in the final, in his debut season after a memorable comeback win in Istanbul.

Alonso would lift the FA Cup the following season, though league success never came with a runners-up position in 2008/09 as good as it got for the former Real Sociedad midfielder at Anfield. A fall-out with Benitez (who wanted to replace him with Gareth Barry!?) later came, with Alonso departing in 2009 for Real Madrid before later joining Bayern Munich.

Another player poached from Barcelona’s famed La Masia academy, Fabregas signed for Arsenal as teenager with the hopes of a first-team breakthrough.

He didn’t have to wait long, making his debut as a 16-year-old before going on to establish himself as a key player under Arsene Wenger, winning the FA Cup in 2005. He was made captain of the side in 2008, leaving for Barcelona in 2011 after more than 300 appearances.

Read: Fabregas — the Spanish artist who found his muse in the Premier League

Twice Chelsea’s Player of the Year in 2011-12 and 2012-13, the latter of those years saw the playmaker provide a league high number of assists as he was named in the PFA Team of the Year. He was surprisingly sold to rivals Manchester United in 2014, where he has continued to be a solid performer in the Premier League.

Arguably the greatest Spaniard to grace the Premier League, and certainly one of the finest signings of the Sheikh Mansour era at Manchester City, Silva has lit up the Premier League since his arrival in 2010.

Signed from Valencia, the diminutive playmaker has been a fundamental part of three title-winning teams, whilst adding four League Cups and an FA Cup to his silverware cabinet. Regarded by many as Manchester City’s greatest ever player, Silva continues to star in the Premier League at the age of 33.

Despised and admired in equal measure, brutish forward Costa became more than a handful for Premier League defences over three seasons with Chelsea.

He left for former club Atletico Madrid in 2017, with defenders across the country breathing a sigh of relief at seeing the back of his aggressive and robust style.

For a short period, Fernando Torres was the most feared forward in European football. He arrived at Liverpool in 2007 and made a huge impact, becoming the highest scoring foreign player in their debut season in English football.

He formed a telepathic understanding with Steven Gerrard, and would score 81 goals in just 142 appearances for the club.

With Liverpool struggling to compete for major honours, Torres left in a British transfer-record move to Chelsea, where despite failing to replicate his previous form would win an FA Cup, Champions League and Europa League.

Would our Spanish XI defeat a French XI in a proper game?