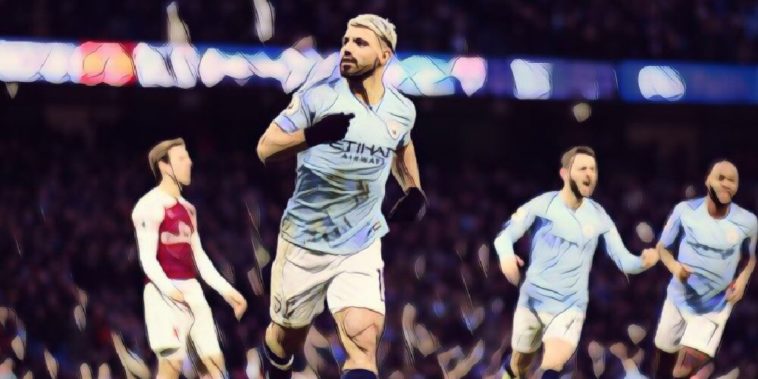 Not for the first time, Man City striker Sergio Aguero inspired his side to victory at the weekend, netting a hat-trick against Chelsea.

Anybody who’s been a regular watcher of the Premier League over the last few years will be well aware that the Argentine hitman has a habit of hitting trebles for City.

In fact, today’s hat-trick was Aguero’s 11th in the English top-flight and sees him draw level with the legendary Alan Shearer at the top of the all time trebles list, with eleven EPL match balls.

Here are the six strikers with the most hat-tricks in Premier League history.

Former Arsenal striker Henry is widely regarded as one of, if not the greatest player to ever grace the Premier League. The Frenchman scored 175 EPL goals in just 258 appearances and won two top-flight titles during his eight seasons with the Gunners.

Never before had English Football fans seen a player combine such frightening pace and sublime technical ability, and the statue of him outside the Emirates Stadium tells you all you need to know about the impact he had on the North London club. Henry is one of three players to have scored a total of eight Premier League hat-tricks.

Spurs and England golden boy Harry Kane, is already high up this list and at the age of 25, and barring serious injury he looks to have a great chance of not only climbing up this particular list, but he’ll also be eyeing the all-time leading goal scorer record.

Just over five years ago Kane was a young striker struggling to break into the Spurs first-team and looked destined to head into relative obscurity in the lower leagues of English Football. However, the boy from Walthamstow’s developed into a lethal finisher, and is rightly regarded as one of the best out-and-out number nines in World Football.

Kane has finished as the top scorer in the Premier League in two of the last three seasons, and even last year when he finished second to Liverpool’s Mohamed Salah, it was actually the first campaign in which he managed to bag over 30 top-flight goals. Renowned for his professionalism and dedication to his craft, Kane could realistically continue banging in the goals at an astounding rate for the next decade.

A player who was once the blue-eyed boy of English Football, although Owen is now known more for the ridiculously stupid things he says as a pundit. However, in his youth, Owen was a tour de force – combing electric pace and deadly finishing ability to devastating effect.

Owen burst onto the scene with Liverpool as a precociously talented 17-year-old, before going on to light up the 1998 World Cup in France with England just a year later.

Sadly for Owen, persistent hamstring injuries gradually robbed him of his speed and by the time he left Anfield for Real Madrid in 2004, his powers were already on the wane. The 40 goal England international would return to the Premier League just a year after moving to Spain and finished out his career with spells at Newcastle, Manchester United and Stoke.

Time has not been kind to Owen’s legacy with the once deadly striker rarely getting enough credit for just how good he was during the first few seasons of his career. However, his record for being the youngest player to score 100 Premier League goals, does show what a top class goal scorer he was in his prime.

Liverpool fans just love a local lad done good, and the boy from Toxteth was adored by Reds fans after he set Anfield alight as an 18-year-old in the early nineties with his deadly goalscoring exploits.

Fowler was not the fastest or most physically robust, but he had a knack of finding enough space to get a shot away with his lethal left foot, and in terms of natural finishing ability he is right up there with the best the Premier League has ever seen.

One of his most famous moments came when he scored a sensational five minute hat trick against Arsenal. His career would sadly begin to suffer due to injury and he would leave Anfield in 2001 for Leeds and then Man City before eventually returning to Liverpool for a swan song in 2006.

He is still the fifth highest scoring striker in Premier League history however, and had it not been for injury he would probably be a lot higher on that list.

At the time of writing Sergio ‘Kun’ Aguero has scored a magnificent 160 Premier League goals in just 229 games. The diminutive attacker has been tearing apart top-flight defences ever since moving to the Etihad from Atletico Madrid in 2011.

Despite most fans recognising Aguero as a living Premier League legend – with his last gasp strike to clinch the 2011/12 title against QPR probably the most famous goal in EPL history – he does seem to be criminally underrated by some in the game, with the Argentina international bizarrely having never made the PFA Team Of The Year.

Despite having turned 30 Aguero looks as sharp as ever and is already Man City’s leading goal scorer of all-time, as well as being the top scoring non-European player in Premier League history.

On current form, it is surely only a matter of time before Aguero becomes the player with the most hat-tricks in Premier League history.

Alan Shearer is the undisputed Big Daddy of Premier League strikers. Shearer not only has the most hat tricks in EPL history, but the former England captain’s 260 goals also make him the divisions all-time leading goalscorer.

Despite being born and bred in Newcastle, Shearer began his career way down South with Southampton, catching the eye as a youngster with a natural instinct for goals and dynamite in his trusty right boot.

Shearer would turn down the advances ofSir Alex Ferguson and Manchester United in 1992 to join Blackburn, where he won the only piece of major silverware of his career when he lifted the Premier League trophy with Rovers 1994/95.

The Former England captain would once again turn down the chance to work with Fergie instead sealing a then world record £15 million move to hometown club Newcastle United in 1996, and he would inevitably go on to break the legendary Jackie Milburn’s record and become the Magpies all-time leading goalscorer.

In terms of finishing ability, it’s hard to see many players coming along that will be able to match Shearer’s power an unerring accuracy.