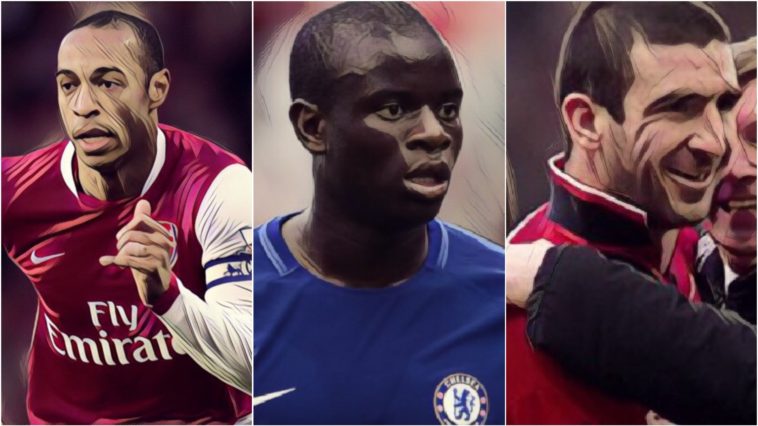 The Premier League has opened its doors to foreign imports ever since its inception in 1992.

Few nations, if any, have had a greater impact on English football than the one across the channel. The French have a habit of shining on these shores, and with that in mind we’ve compiled our all-time French XI.

It’s quite some team…

A tough choice, with Lloris edging out former Manchester United goalkeeper Fabian Barthez in the battle of the World Cup winning keepers.

The 32-year-old has proved an excellent signing since arriving in North London from Lyon in 2012, keeping over 100 clean sheets in all competitions.

Whilst Lloris has failed to win a major honour at Tottenham, he has captained both club and national side, lifting the World Cup with France in the summer of 2018.

Appearing for each of London’s leading clubs, Gallas was a dependable Premier League performer during a career spanning over a decade in England’s top flight.

His greatest success came at Stamford Bridge, winning back-to-back Premier League titles in 2005 and 2006 during Jose Mourinho’s first spell in charge at Chelsea.

Twice named in the PFA Team of the Year, he also won 84 caps during a lengthy international career.

Nicknamed ‘The Rock’, Desailly became one of France’s greatest ever defenders over the course of his career.

He arrived at Chelsea in 1998 after trophy-laden spells at Marseille and AC Milan, and captained the side forming a solid defensive partnership with compatriot Frank LeBoeuf.

He won the FA Cup and UEFA Super Cup during his time in London, before leaving in 2004 as the Roman Abramovich-era began to take shape.

One of the greatest bargains of Sir Alex Ferguson’s Manchester United career, the Scotsman plucked Evra from French side Monaco for a fee of just £5.5m.

After an unconvincing debut in the Manchester derby, Evra would go on to become one of the Premier League’s greatest ever full-backs.

During eight years at Old Trafford, Evra won five league titles, three League Cups and the 2008 Champions League. He left for Juventus in 2014 before briefly returning to the Premier League with West Ham in 2018.

A player so good they named a position after him, Makelele revolutionised the holding midfield position. The Frenchman was combative and tidy in possession, and provided the defensive screen in Jose Mourinho’s first title winning sides at Chelsea.

Signed from Real Madrid by Claudio Ranieri in 2003, Makelele would provide the platform for Chelsea’s attackers, winning every domestic honour during five seasons at the club.

He left Chelsea to sign for Paris Saint-Germain in 2008.

N’Golo Kante has become perhaps one of the most popular players in Premier League history. Blessed with relentless stamina and excellent ball-winning ability, Kante has established himself as arguably the world’s finest defensive midfielder.

He arrived at Leicester unheralded in 2015, and proved a vital component of their shock title winning side that season. After just one season in the Midlands, he left for Chelsea in a £32m deal where he again won the title in his debut season, being crowned PFA Players’ Player of the Year and FWA Footballer of the Year.

His meteoric rise continued when he was part of France’s World Cup winning team in 2018, playing a vital role as France progressed to the final where they defeated Croatia to become champions.

See Also: N’Golo Kante – 10 of the best quotes about the midfield powerhouse

Captain of the famed ‘Invincibles’ side that went the entire 2003/04 campaign unbeaten, Vieira was a formidable presence during almost a decade long spell at Arsenal.

Tall, athletic and powerful, Vieira was the prototype modern midfield player, comfortable at both ends of the pitch.

One of the Premier League’s finest leaders, Vieira won three league titles and three FA Cups at Arsenal, scoring the winning penalty in the 2005 FA Cup final in his final appearance for the club.

He left for Juventus, before later briefly returning to the Premier League with Manchester City in 2010.

Video: 10 of the best quotes about Arsenal legend Patrick Vieira

A solitary League Cup was Ginola’s only major honour in English football, yet it is a return that can’t diminish the impact the flamboyant Frenchman had on these shores.

Part of Newcastle’s great entertainers team of the mid-nineties, Ginola was brilliant to watch in full flow with a natural ability to beat players at ease.

He earned individual recognition after signing for Tottenham in 1997, where he was crowned PFA Player of the Year and FWA Footballer of the Year in 1999.

Few things are as symbolic of Arsene Wenger’s great Arsenal teams than the sight of Robert Pires, Henry and Ashley Cole attacking the left channel.

Pires was a wonderfully elegant footballer, drifting inside from the left with a touch of magic, and was a vital player in Arsenal’s ‘Invincibles’ side.

He won two league titles and two FA Cups in North London, with perhaps his best season coming in the double-winning campaign of 2001/02.

Pires was crowned FWA Footballer of the Year as Arsenal won a league and FA Cup double, and was the Premier League’s top assist provider.

He left for Spanish side Villareal in 2006, before a brief spell back in England with Aston Villa in 2010/11.

See Also: Five of the Best — Assist to goal partnerships in the Premier League

Affectionately nicknamed ‘King Eric’ at Old Trafford, Cantona was voted Overseas Player of the Decade at the Premier League’s 10 Seasons Awards in 2003.

Cantona won four league titles and two FA Cups at Old Trafford, being crowned PFA Player’s Player of the Year in the Premier League’s inaugural season of 1992/93. The following year, he again inspired United to the title, winning the FWA Footballer of the Year award.

Arguably the greatest player to have graced the Premier League, few foreign imports have impacted English football like Thierry Henry.

Blessed with pace, power and nerveless finishing ability, Henry was the division’s best forward across an eight year spell at Arsenal. He left in 2007 for Barcelona, having won two league titles, two FA Cups, cementing his place in Gunners history as their record goalscorer.

His individual hours include four Premier League Golden Boots as the division’s top scorer, whilst three times being crowned FWA Footballer of the Year and twice PFA Player’s Player of the Year. He later returned to the club for a brief loan spell in 2012.

A statue of the Frenchman now sits outside Arsenal’s Emirates Stadium; few, if any, deserve it more.

How does our ultimate French XI stand up against the Dutch XI?