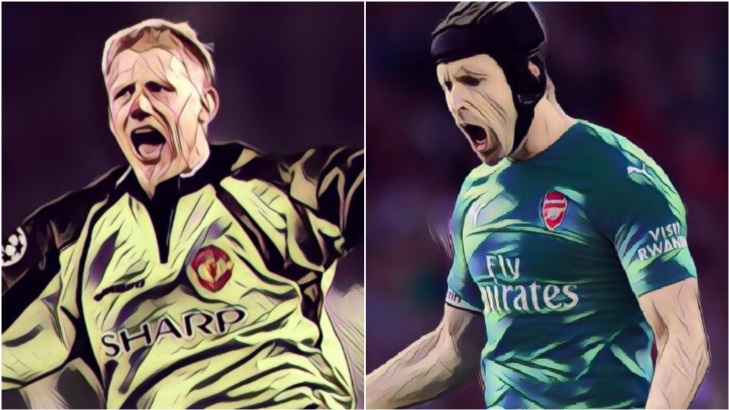 Every single goalkeeper to have kept the ball out of the net in 90 minutes of action a hundred times or more in the history of the Premier League.

The 100 club generally refers to those who have broken a century of goals in the Premier League, a list containing such footballing luminaries as Alan Shearer, Sergio Aguero and Thierry Henry. An even harder club to break into, however, is the one featuring goalkeepers and the milestone of reaching 100 clean sheets.

Only 15 feature in that roll call compared to the 22 goalscorers who terrorised their gloved foes over the years, but there was one very recent addition; Manchester United’s 0-0 draw against Liverpool was David De Gea’s 100th game without conceding a goal in the Premier League. He is one of only three active keepers to carry that achievement.

The 15 goalkeepers to have reached 100 clean sheets in the Premier League:

The Manchester United shot-stopper is arguably the best in the world in his position and could very easily shoot right up this list before his career ends, if not at least a couple of places before the season finishes. Only six goalies have 100 or more clean sheets with one Premier League club, and De Gea is now one of them. At just 28 years of age, the Spaniard could play on for another decade and a half judging by the longevity of some of the other players on this list.

Watch: Goalkeepers with the most Premier League clean sheets

The retired Danish goalkeeper kept his sheet spotless in 107 games for Sunderland, Aston Villa and Stoke City during his Premier League career. His 35 clean sheets for the Black Cats is particularly impressive considering how poor that team was while he was there.

A Bolton Wanderers legend, the Finnish shot stopper played in excess of 500 games for the Trotters in all competitions, before spending three seasons at West Ham United. Another two years at Wigan Athletic preceded a very short stint at Indian Super League outfit ATK, before Jaaskelainen retired at the age of 42 in 2018.

Read: Five of the Premier League’s Worst Ever Goalkeepers

The Irish international is to Newcastle United what Jaaskelainen was to Bolton — a tremendous pair of hands that could have arguably played at a higher level but stayed loyal to their clubs for many years. However, Given eventually left St. James’ Park in the 2009 winter transfer window, a few months before suffering relegation. The Donegal native went on to play for Manchester City, Aston Villa, Middlesbrough and Stoke City, before emulating his blond-haired counterpart by also retiring at the age of 42 last year.

There’s an argument to be made that Hart is the worst goalkeeper on this list, given the incredible players it contains compared to the hapless Englishman. The buzz created by his admittedly impressive displays in the early part of his career for the cities Birmingham and Manchester has subsided greatly following error-strewn spells at Torino, West Ham and Burnley.

And, of course, he’ll always be the guy that got absolutely rinsed by Andrea Pirlo in a penalty shootout.

Widely regard as the greatest goalkeeper the Premier League, and indeed English football, has ever seen, Peter Schmeichel was the personification of a brick wall in front of goal, only much louder and more painful when he collided with opposition players.

The Great Dane would have moved several places up in the list if not for his two season sojourn in Portugal with Sporting CP.

Enjoying a 20 year senior career spanning four different countries, Friedel is best known for his time between the sticks at Blackburn Rovers in the noughties. The American also played for Liverpool, Aston Villa and Spurs in the Premier League, before retiring at the age of 44 in 2015.

Howard, who coincidentally kept the same amount of Premier League clean sheets as his compatriot Friedel, is one of the few active players on this list. Signed from MLS side MetroStars by Man United in 2003, the New Jersey-born goaltender was fixed to be the man to finally replace Schmeichel, but after one season at Old Trafford it was decided he wasn’t the one to fill such illustrious boots.

Nonetheless, Howard would end up having a fine career, pulling off some spectacular performances for both the US national team and Everton, where he cemented his status as a club legend with 116 shutouts, as he might say himself. He’s currently back in MLS playing for Colorado Rapids.

Read: The Five Most Expensive Goalkeepers of All Time

After four great years at Fulham in the early noughties, the Dutchman became a phenom at Manchester United, becoming the long-awaited replacement for a certain Dane.

Van Der Sar would help the Red Devils win multiple Premier League titles, as well as Champions League, keeping the ball out of the net on 90 occasions in the top flight. He also set a new record of 14 consecutive clean sheets in the 2008-09 season, smashing the previous record of 10 set by the man topping this list.

During his nine years at Liverpool, the Spaniard was unstoppable in almost half of the league games he played in, which either shows how ridiculously strong Rafael Benitez’s defences were or how underappreciated Reina is as a goalkeeper; or both could be true. Currently warming the bench at AC Milan after spending three good years at Napoli, he also has the best clean sheets to games ratio in the history of the Premier League.

Martyn’s best years were spent at Leeds United in between spells at Crystal Palace and Everton, accumulating a rake of incredible stops along the way. Criminally underrated in the pantheon of great top tier English goalkeepers, watch back his saves and one might conclude he was a prototype David De Gea.

Read: The full list of players to have scored 100 Premier League goals

Just like Nigel Martyn, Seaman’s early playing career predates the Premier League, meaning his numbers are in fact more impressive than his post-1992 statistics illustrate. The ex-England goalie played for a number of teams before landing in north London, where he became a mainstay between the sticks at Arsenal for 13 years, keeping 137 clean sheets for the Gunners.

The Australian only joined one of the top clubs towards the end of his career, signing for Chelsea in 2013 as a backup, but he was one of the most consistent performers in his position while lining out for Middlesbrough and Fulham. A Europa League finalist with both clubs as well as a League Cup winner with Boro, Schwarzer holds the distinction of being the first non-British or non-Irish player to reach 500 Premier League appearances.

Often liable to make a howler, James’ sheer longevity propels him so far up this list. Then again, there’s a reason why so many teams have called on his services over the course of a 26-year career. Making his big break at Liverpool in the nineties, he would go on to appear for Aston Villa, Man City, West Ham, and Portsmouth, before heading to Iceland and India to finish out his playing days, retiring at the age of 44.

Having only announced his impending retirement in January, Cech is the only goalie in Premier League history to have kept 200 or more clean sheets, keeping 162 of those for Chelsea during his highly successful stint before moving to London rivals Arsenal.

Although he could never quite get back to the level he was at before suffering an unfortunate head injury in the first minute of a match against Reading in 2006, the Czech international was at one point during the noughties the undisputed best in his position. His stats tell a story of just how unstoppable he was, especially at Stamford Bridge where he made up part of arguably the stingiest defence in English football ever.

The Czech Republic international is unlikely to add to his tally before retiring, with Bernd Leno seemingly preferred as number one, but it seems highly unlikely that anyone will catch up to his phenomenal record either.