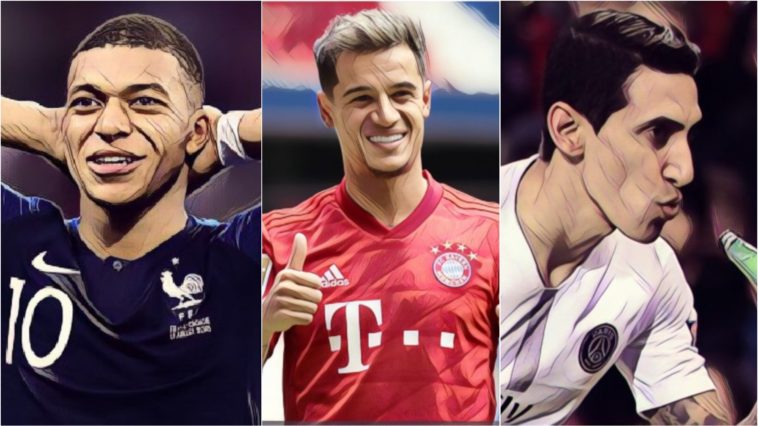 Rewind to the turn of the millennium and the concept of a £100m footballer would have been laughed at, but in the ever-increasing world of transfer fees that landmark has been breached, and then some.

Seemingly on a never ending upward trajectory, football’s financial figures continue to boom and we’ve decided to look back at the most expensive footballers of all-time. These stars have racked up vast fees throughout their careers, each with varying degrees of success.

The French winger makes this list courtesy of a mega-money move to Barcelona in 2017, the Spanish giants shocking Europe by making the talented teenager their record signing in the wake of Neymar’s departure.

Having come through the ranks at Rennes before moving to Germany with Borussia Dortmund, Dembele thrived in his sole season in the Bundesliga before his high profile switch.

The 24-year-old has enjoyed a difficult time on a personal level since his arrival from Dortmund four seasons ago, injuries hampering his progress with Dembele spending long periods on the treatment table.

Despite two league titles and two Copa del Rey triumphs, the winger has failed to have the impact first hoped upon his high-profile arrival.

A serial winner with league titles secured in Portugal, Spain and France, the 111-cap Argentina international has been one of the finest wide players of his generation.

The winger became a household name during a spell at Benfica, attracting the interest of Real Madrid and securing a big money move to the Bernabeu. Thriving alongside the likes of Cristiano Ronaldo and Karim Benzema, he helped the Spanish giants to La Liga and Champions League success, before being surprisingly allowed to leave the club in 2014.

A British transfer-record move to Manchester United proved a major disappointment, however, as he struggled to adapt to the demands of English football and departed after just one season.

Reigniting his career in Ligue 1 with Paris Saint-Germain, the Argentine has helped the capital club to 17 honours, including four titles in six seasons.

Barcelona’s current concerning finances are a result of the club’s overspending on a series of market mistakes in recent seasons, including a huge €120m deal to sign Antoine Griezmann from Atletico Madrid.

Griezmann had starred during five seasons in the Spanish capital, scoring 133 goals in 257 appearances for Atletico after signing from Real Sociedad.

The France international also played a key role in Les Bleus’ World Cup triumph in 2018, but has struggled under the weight of expectation in the Camp Nou.

Griezmann has scored 35 goals in 99 games since his big-money move to Barcelona, though has largely looked a shadow of the player so excellent during his time at Atletico.

Another Catalan club-record signing, former Liverpool favourite Philippe Coutinho features in this list courtesy of his record move to Barcelona in January 2018.

Having struggled to make an impact after moving to Europe with Inter Milan, Coutinho fulfilled his undoubted potential in the Premier League to become a huge fan’s favourite at Anfield. Five seasons on Merseyside ultimately delivered no silverware, and a mega-money move to Spain proved too enticing of a proposition to decline.

The move to La Liga has proved to be a major disappointment, however, and despite securing back-to-back La Liga titles he soon found himself out of favour and unwanted. He failed to find his role during a loan spell at Bayern Munich in 2019/20, before an injury-hit campaign after returning to Barcelona last season.

Eden Hazard rose to prominence at Lille to spark interest from Europe’s leading clubs, with Chelsea winning the race to sign the winger after he had inspired the French side to Ligue 1 title success.

Hazard spent seven seasons with the west London club and established himself as one of the finest players in the Blues’ modern history, winning six major trophies including two Premier League winners’ medals.

The Belgium international’s low centre of gravity and dribbling ability made him one of the most entertaining players in English football, with Hazard named as the PFA Player of the Season following Chelsea’s 2014/15 title success.

Named as Chelsea’s Player of the Year in four separate seasons, the lure of Real Madrid proved too difficult to resist for Hazard who completed a big-money move to the Bernabeu in 2019.

The dream move to his boyhood club has since proven a nightmare however, injury problems having ravaged his time in Spain with Hazard having scored just four league goals across two seasons.

The boy wonder burst onto the scene as part of an exciting Monaco side that upset the odds to win Ligue 1 and reach the Champions League semi-finals in 2017, before seeing their finest talent cherry-picked by Europe’s leading clubs.

Mbappe was one starlet prised away from the principality club, becoming the second most expensive player in football history when joining divisional rivals Paris Saint-Germain. His impact in the French capital has been instant, winning three league titles in four seasons and establishing himself as the club’s key figure despite the presence of more established teammates.

Mbappe helped France to World Cup success in 2018, becoming the first teenager to score in the final since Pele, and has continued to go from strength to strength at the Parc des Princes.

He has scored 132 goals in 172 appearances for PSG and has twice been named as Ligue 1’s Player of the Season, whilst he has finished as the leading scorer in France in three consecutive campaigns.

Iconic Duos: The prototypes of the modern full back, Cafu and Roberto Carlos

Alvaro Morata ranks as the fourth most expensive player in history in terms of total transfer fees, having enjoyed somewhat of a nomadic career across teams in Spain, England and Italy.

Having risen through the ranks at Real Madrid, he helped the club to Champions League success before a €20m move to Juventus.

The Spanish side inserted a buy-back clause into the agreement and activated the figure required to re-sign Morata two seasons later, the forward enjoying the most productive season of his career after netting 15 league goals and winning a second Champions League in 2016/17.

Those performances saw Chelsea splash out £60m on his services, but he faded following a fast start and returned to Spain with Atletico Madrid after 18 unhappy months in the Premier League.

Morata re-signed for Juventus on an initial loan deal with an option to buy for €45m in 2020 and scored 20 goals in all competitions during his first season back in Turin.

Despite spells with some of European football’s biggest clubs, the Spain international has failed to truly demonstrate he belongs amongst the elite company elsewhere on this list.

It’s fair to say that each of Cristiano Ronaldo’s clubs have got significant value for money from the Portuguese superstar.

Signed as a teenager from Sporting Lisbon by Manchester United, he flourished into one of the world’s finest players during a six-season stay at Old Trafford. His time in the Premier League brought three league titles and the 2008 Champions League, whilst winning the first of his five Ballon d’Or awards that same year.

After 118 goals in 298 appearances he joined boyhood club Real Madrid in a world-record deal, where he would break a whole host of footballing records.

Ronaldo signed for Juventus in a €100m deal in 2018, winning the Serie A title and being named as the division’s most valuable player during his debut season in Turin.

His three seasons with Juventus have consisted of two league titles and 101 goals in 131 games, becoming the first player in history to win top scorer accolades in England, Spain and Italy.

The most expensive player in football history in terms of a single transfer, and a vastly inflated deal which had repercussions throughout the transfer market, Paris Saint-Germain made a statement signing with the capture of the Brazilian forward from Barcelona in 2017.

The French club activated the €222m release clause in Neymar’s contract, making him the most expensive footballer of all-time and by some distance – more than doubling the previous world record fee that took Paul Pogba to Manchester United.

Regarded as Brazilian football’s brightest prospect at Santos, Neymar thrived in European football upon moving to the Nou Camp. Part of a deadly front three alongside Lionel Messi and Luis Suarez, the trio fired Barcelona to treble success in 2015.

Following his high-profile move to France, the forward was named as the Ligue 1 Player of the Year after firing his new team to the title during his maiden campaign. Two further titles have followed, but his time in Paris has mixed brilliant performances with injury problems and off-field controversies.

Signed in a bid to fire PSG to Champions League success and escape Lionel Messi’s shadow, Neymar has yet to elevated either himself or his club to the levels hoped upon his arrival, despite an impressive record of 87 goals in 116 appearances in all competitions.

Despite the exorbitant sum PSG spent to sign Neymar, Romelu Lukaku is now the most expensive player in football history in terms of cumulative transfer fees, following the forward’s £97.5m club-record move to Chelsea from Inter Milan.

The Belgium international has been no stranger to high-profile moves throughout his career, first signing for Chelsea as a teenager following his exciting emergence at Anderlecht.

He struggled to make an impression during his first spell at Stamford Bridge, but impressive loan spells at West Brom and Everton resulted in a £28m permanent move to the latter and a prolific period on Merseyside.

Lukaku scored 87 goals in 166 appearances for the Toffees, his performances persuading Manchester United to invest £75m to bring the star to Old Trafford in 2017.

He continued to fire at a prolific rate across two seasons with the Red Devils, though was allowed to depart for Inter Milan for £73m and has since enjoyed the best period of his career at the San Siro.

Lukaku eclipsed Ronaldo Nazario as the fastest player in Inter’s history to reach 50 goals in all competitions and was named as Serie A’s Most Valuable Player after inspiring the club’s title success in 2020/21.

Chelsea have now smashed their transfer record to sign one of European football’s most reliable sources of goals and make Lukaku the most expensive player in the game’s history.