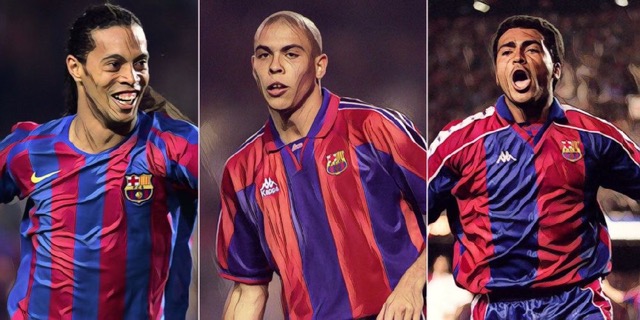 Barcelona have a long and proud history featuring some of the finest footballers to have graced the game, with many of the Catalan club’s most iconic stars hailing from the footballing superpower that is Brazil.

The Spanish giant’s love affair with Brazilian’s began way back in the 1930’s with the double capture of Jaguare and Fausto Dos Santos from Vasco de Gama, the duo becoming trailblazers for their nation’s stars heading to the Camp Nou.

We’ve decided to profile some of the best Brazilian’s to turn out in Barcelona colours, a list of the highest quality featuring Ballon d’Or winners and all-time greats.

Here are five of the best Brazilians to play for Barcelona:

Romario’s flame at Barcelona flickered all too briefly, but burned ever so bright at his brilliant best.

The diminutive forward had captured headlines in European football during a prolific spell at PSV Eindhoven, finishing as the Eredivisie’s top scorer in three consecutive seasons and winning three league titles during a five-year spell in the Netherlands.

Romario, however, had outgrown Holland and packed his bags to join Johan Cruyff’s ‘Dream Team’ in Catalonia, making an instant impact with a debut hat-trick against Real Sociedad before hitting 30 goals in 33 appearances to help Barca to the La Liga title.

Another hat-trick – in a 5-0 thrashing of arch-rivals Real Madrid – further etched Romario’s name into Barcelona folklore, and after finishing as runner-up in 1993, he claimed the FIFA World Player of the Year award in 1994 after firing Brazil to World Cup success in the United States.

Described by Cruyff as the greatest player he ever coached, Romario unexpectedly left Barcelona in 1995 amid a fall-out with the Dutch manager, the Brazilian’s notorious party lifestyle causing a rift that saw the forward head back to his homeland with Flamengo.

Romario departed Barcelona having scored 34 goals in just 46 league appearances, whilst he remains the fourth-highest goalscorer in the history of the Brazilian national team.

The heir to Romario for both club and country and a player regarded by many as the greatest centre-forward of all-time, O Fenomeno was a player who thrilled like few others to have played the beautiful game.

Ronaldo’s time as a Barcelona player lasted just a single, sensational season, though that is enough to warrant his inclusion on this feature given his phenomenal exploits in the Catalan club’s colours.

Rarely has a player looked quite so unstoppable as Ronaldo in a Barcelona shirt, the young forward arriving for a world-record fee from PSV Eindhoven and proving worth every penny, scoring a breathtaking 47 goals in 49 matches, winning a treble of cup competitions and becoming the youngest ever winner of the Ballon d’Or.

Combining the strength of a bull with the poise of a ballerina, Ronaldo was simply exhilarating when operating at full tilt, leaving defenders in his wake with fleet-footed feints and trademark step overs.

His reign as Barcelona’s main man ended the following summer with another world-record move to Inter Milan before joining Real Madrid’s Galacticos, Ronaldo ending his career with two Ballon d’Or trophies and three FIFA World Player of the Year awards, in addition to inspiring Brazil to World Cup success in 2002.

10 of the best quotes about Brazilian Ronaldo

The move proved to be an inspired purchase with Rivaldo emerging as one of the most talented players of his generation, finishing as Barca’s top scorer and helping the club to a domestic double during a fine debut season at the Camp Nou.

That success ended a three-year wait for a league title and the following season saw Rivaldo star once more as Barca retained their La Liga crown, the forward’s 29 goals in all competitions seeing him crowned as the winner of both the Ballon d’Or and FIFA World Player of the Year awards in 1999.

Barcelona’s success stagnated there on, however, Rivaldo the stand-out star in a side not quite capable of challenging for the game’s biggest prizes, scoring 130 goals in 235 appearances over a five-year spell.

His finest individual season came during the trophy-less 2000/01 campaign, the forward hitting 36 goals in all competitions including a hat-trick against Valencia that is regarded by many as the greatest ever scored.

Barcelona’s limited success during this period – either side of Cruyff’s Dream Team and a return to the summit of European football under Frank Rijkaard and later Pep Guardiola – is perhaps the reason why Rivaldo is not quite as revered as others on this list, though there is no doubt the club saw the peak years of one of the greats of Brazilian football.

Barcelona’s aforementioned return to the summit of the European game was largely inspired by one man, the brilliant buck-toothed Brazilian that is Ronaldinho.

Fans of a certain age will wax lyrical about the joyous talents of the playmaker, the care-free footballer who waltzed into one of the world’s biggest football clubs and changed the course of their history – all with a signature smile upon his face.

Barcelona pipped Manchester United to the signing of the in-demand Ronaldinho during the summer of 2003, a deal which must surely rank amongst the finest purchases the club have made in the modern era.

Ronaldinho played the game in a style not seen before or since his brief reign as the world’s finest footballer, exciting, extravagant and expressive.

Arriving at a Barcelona team without a major trophy in four seasons, he inspired the side to back-to-back league titles and the 2006 Champions League, winning the Ballon d’Or in 2005 and FIFA World Player of the Year awards in both 2004 and 2005.

His very best lasted little longer than three years, however, it was a peerless peak that laid the foundations for a golden era in Barcelona’s history and ensured his own lasting legacy in Catalonia.

10 of the best quotes on the mercurial Ronaldinho

Completing our top five ahead of the sublimely talented Neymar is a player whose career has seen unprecedented success, the most decorated player in the history of football – Dani Alves.

The flying full-back joined a long line of compatriots to redefine the once unfashionable role, an evolution from predecessors such as Cafu and Roberto Carlos as he continually influenced games from the right-back position.

Arriving from Sevilla, Alves developed into arguably the finest full-back of his generation, winning a wealth of major silverware during an eight-year spell at the Camp Nou including six La Liga titles and three Champions League triumphs.

Possessing a near-telepathic relationship with Lionel Messi down the right-flank, the duo combined to terrorise opposition defences for almost a decade at Barcelona, winning every major honour available in a side regarded by many as perhaps the greatest club team of all-time.

Alves made 391 appearances in all competitions for the club, scoring 21 goals, later winning further titles at the likes of Juventus and Paris Saint-Germain in addition to earning over a century of caps for the Brazilian national team.

Read – Ranking every member of the Champions League ‘100 club’