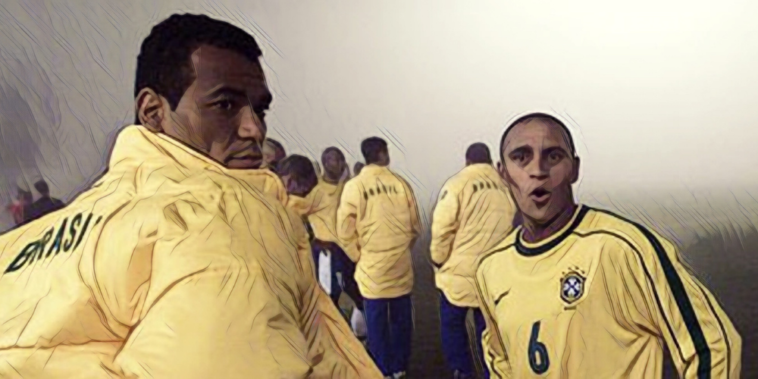 It’s said that good things come in threes. Whilst that may occasionally be true, in the world of football it is often twos that leave the most lasting of memories.

Successful football sides are frequently hailed as winning machines with glory coming as a collective, but it is the vital cogs working coherently within said machine that allow it to truly function and flourish.

Partnerships can be between the players paired closest together in a designated system, or those who work cohesively to bring the balance to the XI.

Roberto Carlos and Cafu are one such pairing who will forever be linked, their careers having occurred simultaneously with the iconic names of both flying full-backs now permanently intertwined, a rarity that one is mentioned without making reference to the other.

The two players, both born in Sao Paulo districts just three years apart, are two footballers who helped pioneer the positions they mastered during storied careers at the top.

Modern football has placed a greater emphasis than ever before on the full-back, a previously unfashionable role that has evolved into one of the most important in any side or system.

The very finest exponents of the role require endless energy, determined skills one-against-one and an ability to contribute to attacking moves as an outlet wide on the touchline – each attributes that Cafu and Carlos boasted in abundance.

Each was capable of lung-busting runs from deep inside their own half, overlapping relentlessly to expose space behind opposition lines and cause overloads in wide areas.

Cafu’s rise began in the late eighties at Sao Paulo, where after an initial adaptation from right-wing to right-back he began to impress, incorporating his natural attacking qualities with the newer, more defensive role.

It was Telê Santana, the legendary Brazilian coach, who moved Cafu further back following an injury to Sao Paulo’s first-choice right-back, a decision which proved a masterstroke and paved the way for an iconic career.

He earned the first of a record-breaking 142 caps for Brazil soon after, becoming a regular with the Selecao and forming part of the side crowned world champions with victory at the 1994 World Cup in the United States.

After spending six seasons with Sao Paulo he undertook a short-lived move to Europe with Real Zaragoza, returning to Brazil for brief spells with Juventude and Palmeiras before finding his home in Italy.

The unshackled education he had received in his homeland was now merged with the traditional defensive methods of Italian football, a blend which helped mould Cafu into one of the most complete full-backs the game has seen.

Cafu spent more than a decade in Serie A with Roma and AC Milan, a period in which he reigned perhaps unrivalled as the finest right-back in the world.

He won the Scudetto with the former – only Roma’s third league title – before winning a second Serie A title and the Champions League after crossing from the capital to Milan.

Carlos’ own venture to Europe was more straightforward than that of his long-time international teammate, rising to prominence with back-to-back title successes at Palmeiras before crossing the Atlantic to sign for Inter Milan.

He spent only one season with the Nerazzurri before moving to Real Madrid, where his rise to the upper echelons of the sport soon accelerated in the Spanish capital.

Across 527 appearances in the prestigious all-white colours of world football’s most glamorous club, Carlos compiled an incredible résumé of success, winning four league titles and three Champions League trophies across the turn of the millennium

The thunder-thighed left-back was not signed as a Galactico addition but he soon became one, comfortably rubbing shoulders with world football’s finest players at the Bernabeu.

There are few players of the modern era who possess a highlight reel as aesthetically pleasing as that of Carlos, a footballer whose penchant for unleashing maximum power often had spectacular consequences.

His free-kick for Brazil at the 1997 Tournoi de France defies all scientific logic even when replayed countless times, whilst a blockbuster from an absurd angle for Real Madrid also lives long in the memory.

Both players, at their best, were hailed as the number one in their respective positions, or at least at the forefront of any conversation regarding the game’s finest full-backs.

For the national side the presence of the full-back partnership helped propel the South Americans to World Cup success in 2002, with the Brazilians at their buccaneering best during the finals in Japan and South Korea.

As a fabled front three of Ronaldo, Rivaldo and Ronaldinho toyed with opposition defences, the galloping runs forward of Carlos and Cafu further tormented teams left overwhelmed by Brazil’s multitude of attacking threats.

Carlos netted a free-kick in a manner only he can during a group stage thrashing of China, a thudding strike from distance in which the leather of the ball could almost be perceived to wince upon connection, rocketing through the humidity of the Seogwipo air before finding its way into the top corner.

Cafu’s highlights would pale into comparison were they compiled together in a YouTube montage, but the World Cup-winning captain was no less important, his indefatigable runs from right-back a trademark of the 2002 vintage and his leadership unquantifiable.

Dynamic, determined and unrelenting in his role up and down the flank, there is good reason Cafu’s qualities were often compared to an express train and not another human being.

Victory over Germany at the International Stadium in Yokohama saw Brazil crowned world champions for a fifth time, with the image of Cafu – the first and only man to play in three consecutive World Cup finals – stood aloft the trophy podium cemented into the nation’s folklore.

Neither Carlos or Cafu invented the attacking full-back, but there’s a strong argument that no players have ever been better exponents of the unique role than the cavalier compatriots who adorned Brazil’s famous yellow shirts during the nineties and 2000s.

There have been many footballers since compared to the all-time greats, with fellow Brazilians Marcelo and Dani Alves boasting incredible achievements in their own right, though fail to command the adulation enjoyed by their national team predecessors.

Full-backs have never enjoyed greater status or popularity amongst the masses and the occasionally gung-ho performances of Cafu and Carlos most certainly went a long way to altering perceptions.

In a game that continues to evolve and change on a season-upon-season basis, the brilliant Brazilian full-back who performed in parallel remain the standard setters.