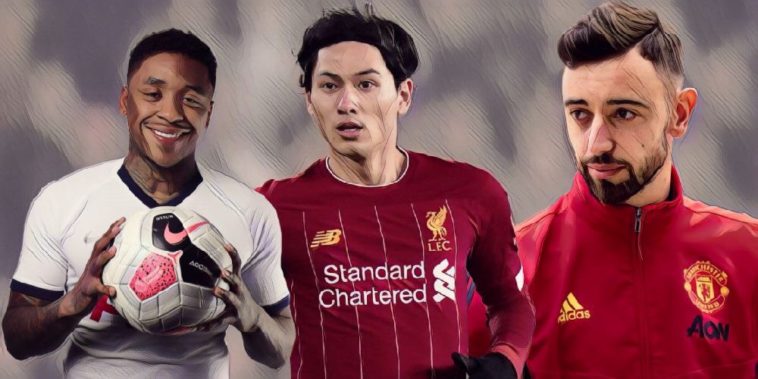 Well, let’s be totally honest, the January transfer window was somewhat of a washout, with very little business being done up and down the Premier League.

However, there were some significant movers in the market, especially within the Premier League’s ‘big six’, so here’s how we rated their transfer business over the course of the last month.

The Gunners came into the window knowing they need to strengthen at the back, and it’s exactly what they have done – on paper at least.

Bringing in Cedric Soares on loan from Southampton helps bolster the clubs options at full-back, with both right and left-back positions having been a problem this season. Naturally right-sided, but comfortable on the left, the Portugal international will provide an alternative to the likes of Hector Bellerin and Ainsley Maitland-Niles, and also cover for the injured Kieran Tierney and the often criticised Sead Kolasinac.

Meanwhile, Arsenal have also brought in a much-needed centre-back in the form of Pablo Mari from Club World Cup finalists, Flamengo. The North Londoners have been pretty threadbare at the back, and there will be hopes that the Spaniard can add some much-needed quality to their defence.

Pablo Mari is set to join us on loan until the end of the season.

💬 Leave your welcome messages for @PabloMV5 below! 👇

They also managed to keep hold of all of their best players, with the likes of Pierre Emerick Aubameyang having been linked with a move to Barcelona, with the only departures being of youngsters going out on loan.

They could have maybe strengthened their midfield further or tried to attract a more Premier League proven centre back, but overall, a decent window that addressed the key area’s of the squad.

Well, what can you say? You spend months of legal battles to overturn a transfer ban, winning the right to sign players in January, only to bring in absolutely nobody! Incredible carry on.

Frank Lampard made no secret of his desire to add more of a goal threat to his young side, and that was before Tammy Abraham picked up his injury. However, despite being linked with half of Europe, Chelsea impressively managed to secure the sum total of nothing.

They could probably also have done with a new left-back, with Marcos Alonso and Emerson Palmieri not massively favoured, though will likely wait to make a move for Leicester‘s Ben Chilwell in the summer, though they won’t be the only ones interested, especially if he performs well at Euro 2020.

Chelsea’s inability to sign a striker meant that Olivier Giroud was also denied his desired exit, while Brighton snapped up promising teenager Tariq Lamptey on a permanent deal just a month after making his Premier League debut for the club.

How do you improve what so far has delivered almost perfection this season?

Liverpool are nailed on to secure the Premier League title, and are set to smash a whole host of records along the way, the Reds yet to taste defeat after 24 league games.

Go behind-the-scenes on @takumina0116's first full day at Melwood with Inside Training 📹 pic.twitter.com/jmfsU5crya

Still, Jurgen Klopp has always insisted that his side can improve, and he has managed to secure the signing of highly-rated Japan international Takumi Minamino. Even more impressively, he managed to snap him up for just £7.25 million, and while he is unlikely to break the formidable triumvirate of Salah, Mane and Firmino just yet, he will add further depth to an already incredible squad.

If there was to be an award for best pound-for-pound signing, Minamino, who ripped it up in the UCL Group stages with RB Salzburg, would surely be the winner.

So, like Chelsea, there were no new arrivals at Man City, though it has to be said that their need for additions was significantly less than their Stamford Bridge rivals.

However, they have already fallen 19 points behind Liverpool in the title race, and are so far on course to pick up just 81 points this season, far less than the 100 and 98 they have achieved over the last two seasons respectively.

The Citizens have been without Aymeric Laporte for the vast majority of the campaign through injury, and while the Frenchman recently returned to action, the soon to be deposed champions could really do with another quality centre-back, with John Stones and Nicolas Otamendi having hardly covered themselves in glory in his absence.

They did offload left-back Angelino to RB Leipzig on loan, the deal including an option to buy for £25 million, despite just re-signing him from PSV in the summer for £5m. A decent bit of business in an otherwise quiet window at the Etihad.

Going into the window, Manchester United fans will have told you they desperately need to add a goalscorer and a more creative midfielder to their ranks, and that is exactly what they have done.

In Bruno Fernandes, the Red Devils have lured one of the most creative midfielders in Europe to the club, the Portuguese having scored 63 goals and provided 42 assists in just 134 games for Sporting Lisbon.

Enjoy behind-the-scenes footage of a memorable day with our new signing ✍️#MUFC pic.twitter.com/qma8iK42AP

In the striking department, the club was heavily linked with a move for the prolific Erling Haaland in the early stages of the window, though the Norwegian opted for Borussia Dortmund, while Edinson Cavani later emerged as an option to add firepower to their front line.

However, United fans will have to settle for a striker in the form of Odion Ighalo, who joins the club on loan until the end of the season from Shanghai Shenua. He may not be the stellar name that United fans crave, but he had a decent goalscoring record in the Premier League during his time at Watford and should offer something different to Anthony Martial and Mason Greenwood, who had been left as the clubs only strikers in the absence of Marcus Rashford.

The club also managed to offload some more deadwood, with Ashley Young and Marcos Rojo both departing, so overall, not a bad window, though a more high-profile striker and not one picked up from the last minute bargain bin would have seen a better mark.

Just like Chelsea and Manchester United, Spurs were one of a number of sides searching for a striker in January following the potentially long-term injury to Harry Kane, who could miss out on England’s Euro 2020 campaign.

They were linked with a whole host of names including Krystof Piatek, Willian Jose, Olivier Giroud, and even the aforementioned Odion Ighalo, though they were unable to secure any.

The North London club did, however, manage to bolster their attacking options with the arrival of Steven Bergwijn, or ‘Stevie’, as Jose Mourinho likes to call him.

“Bergwijn? I prefer to say Stevie…” ?

Mourinho on Spurs’ striker struggles and how to pronounce the name of their new man… ? pic.twitter.com/OWIl1WGGPD

The Netherlands international is comfortable playing on either flank, and will allow Heung Min Son or Lucas Moura to play through the middle in Kane’s absence.

Spurs also won the race to bring in the highly-rated Gedson Fernandes, while the club took up their option to sign Giovani Lo Celso on a permanent deal.

Overall, a decent window, but fans will be hoping that their lack of a striker will not hamper their push towards the Champions League places.