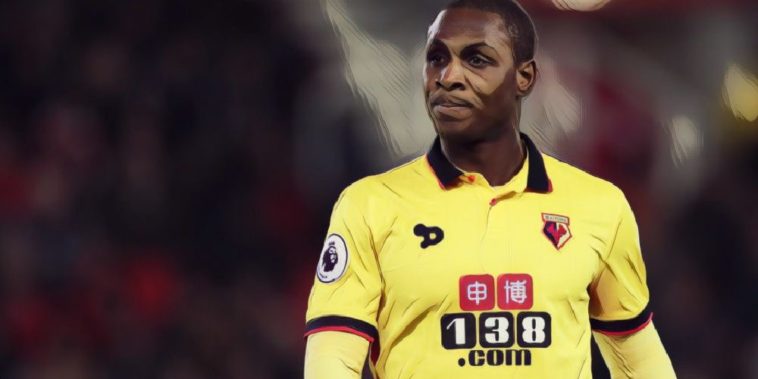 Well here’s a story that we didn’t think we would be bringing you, but Manchester United have completed a deal to sign Odion Ighalo from Shanghai Shenua, beating Tottenham Hotspur to his signing in the process.

Manchester United came into the season looking light in attacking areas following the departures of Romelu Lukaku and Alexis Sanchez, and the injury to Marcus Rashford earlier this month further compounded their lack of firepower.

Since that injury, United have been linked with a whole host of players, Edinson Cavani being the standout name, though few would have expected Odion Ighalo to be a United player by the end of the window.

However, having failed with a deadline day deal for Bournemouth forward Joshua King, the Old Trafford outfit turned their attentions to former Watford striker Ighalo.

While he may not be the marquee signing that Manchester United fans have been clamouring for, the striker had attracted the attentions of Tottenham Hotspur, with Jose Mourinho’s side also on the lookout for a striker following the serious hamstring injury sustained by Harry Kane on New Years Day.

However, having grown up supporting Manchester United, Sky Sports are reporting that Ighalo has rejected the chance to join Spurs and opted for a move to Old Trafford, where he will stay until the end of the season.

Odion Ighalo to Manchester United, here we go! Total agreement with Shanghai Shenhua for a loan with buy option. He’ll fly to UK during the weekend. 🔴 #MUFC #ManUnited

Tottenham called him but the player decided for Man Utd – he’s #MUFC fan since he was a kid.

Ighalo is still over in China where he was preparing for pre-season training ahead of the 2020 season, and he is expected to fly to the UK on Saturday to finalise the deal.

The 30-year-old hit 20 league goals in Watford’s promotion campaign in 2014/15, following it up with a further 16 top-flight goals the season after, before joining Changchun Yatai in 2017.

Ighalo follows Bruno Fernandes through the arrival door at Old Trafford, the Sporting Lisbon midfielder arriving at the club in a €55 million deal on Thursday.