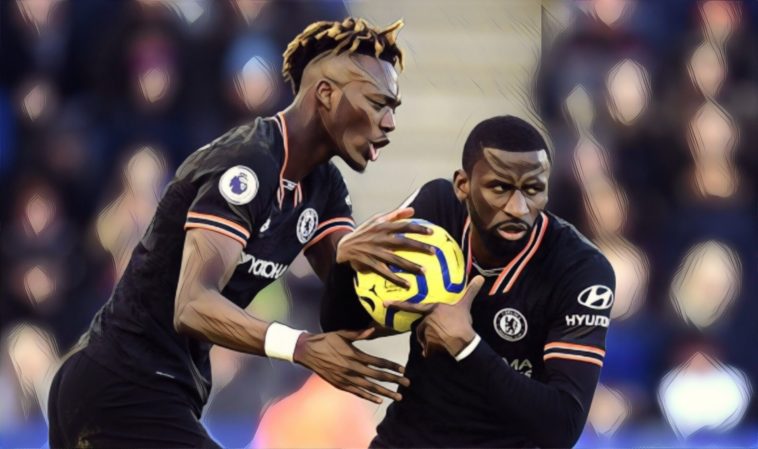 It ended honours even at a blustery King Power Stadium today after top-four hopefuls Leicester City and Chelsea played out a hugely entertaining 2-2 draw.

Chelsea started much the better of the two teams but it was a familiar story for manager Frank Lampard, who was left frustrated as his Blues side once again failed to make the best of some promising situations.

As the half wore on Brendan Rodgers side gradually gained a foothold in the game and the best chance of the opening period would fall to the Premier League‘s top scorer Jamie Vardy. However, the Leicester City striker uncharacteristically fired straight at Chelsea ‘keeper Willy Caballero when clean through on goal and the sides went in at the break all square.

We wouldn’t have to wait long for the deadlock to be broken though, with Chelsea defender Antonio Rudiger rising highest to head home from a corner just a minute into the second period.

Leicester upped their game thereafter though and found an equaliser via heavily deflected Harvey Barnes strike, the promising winger notching his fourth goal in his last six appearances.

The Foxes took the lead in the 64th minute left back Ben Chilwell stroking home at the back post from a Youri Tielemans cross, but Chelsea hit back just six minutes later. German international Rudiger once again headed a Mason Mount cross past Foxes ‘keeper Kasper Schmeichel.

Both sides pushed on in hope of finding a winner, but it would be Leicester who looked the more likely to score, with Jonny Evans and Barnes both missing gilt-edged chances.

2 – Antonio Rüdiger is the first defender to score a brace for Chelsea in the Premier League since John Terry against Fulham in April 2013; both of his goals that day were also headed. Noggin. #LEICHE pic.twitter.com/hACIstv5u4

Speaking afterwards Chelsea goalscorer Rudiger admitted his side had been sloppy at times, but all in all, he was happy with a point and spoke of how the Blues are determined to fight to finish the season in a successful manner.

“At the end of the day it’s good to take a point away from here because they were pushing and after the 1-0 we were a bit sloppy,” Rudiger told BT Sport.

“I’m happy for the team but most important is the spirit we showed after the 2-1 and we came back.

“We only have to look game by game. The upcoming month of February will be very tough.

”But we will be up for the fight, that’s for sure.”

The gap between third place Leicester and fourth place Chelsea remains at eight points, although Lampard’s side are seven clear of Manchester United and Spurs who are level on points below them.

See Also: Six Premier League records that could be equalled or broken this season