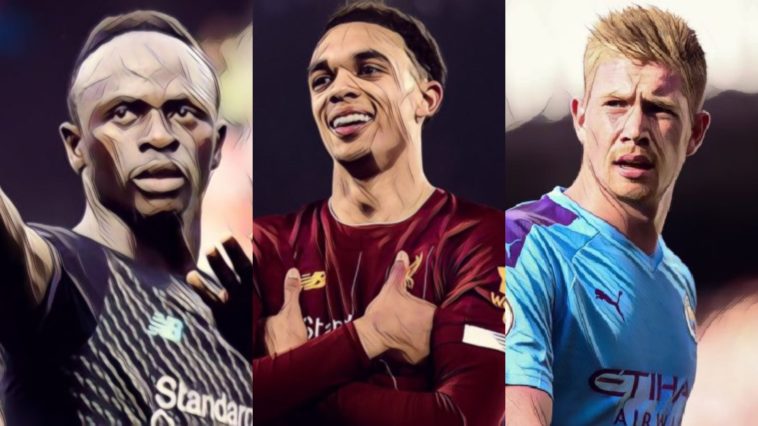 Towards the end of every season the PFA reveal their Premier League Team of the Year and every season, without fail, just about nobody agrees on it.

It’s an incredibly subjective process and everyone has a different idea of what makes a footballer worthy enough to make it into the best XI of a given season.

BBC Sport recently asked the public for their opinion on this matter, giving readers the chance to vote on their Team of the Year, which resulted in Bruno Fernandes getting a spot. This is despite the fact that the Manchester United midfielder has made a grand total of… five league appearances for his new club.

Although the season is not over and we don’t even know whether or not it will recommence at some point soon, we’ve had a stab at picking the best possible XI from the 29 weeks of action up to now, paying particular attention to those who have, you know, actually played a considerable part of the season thus far.

Ten years ago Bernd Leno started out his senior career in the third tier of German football. Today he is one of the top goalkeepers in the Premier League. It’s quite a rise for a player who was pretty good, but not great, at Bayer Leverkusen for many years, and he’s now playing out of his skin for Arsenal.

The German shot stopper has the third best save percentage (77.2%) in the league behind Alisson Becker (80%) and Kasper Schmeichel (77.7%), although neither of those men have to play behind one of the most haphazard defences in the league. Leno repeatedly has to deal with high quality shots due to the poor defending in front of him, and it’s only because of him that Arsenal haven’t conceded more than 36 times this season.

There is little argument against the case that Alisson is the league’s best goalkeeper at this moment, but having missed nine league games through injury or suspension, that was just too great a chunk of the season to have missed to be considered for the number one spot I’m afraid.

Revisiting the 1994/95 Premier League Team of the Year

Last season Trent Alexander-Arnold broke the record for most assists in a season by setting up 12 goals. This season he went ahead and repeated the trick, doing it in less games this time around.

Watching the 21-year-old’s game develop over these past two years is almost like seeing a young Kevin De Bruyne playing at right-back. Comparisons with David Beckham have been made and it’s easy to see why: his delivery of the ball both from open play and set pieces is sublime.

Five of the best full-back pairings in Premier League history

Undoubtedly the best defender in the world in 2019, Virgil van Dijk has been imperious yet again this season, even if he hasn’t been quite at the level of 2018/19.

The Dutchman has formed an excellent partnership at the back with Joe Gomez, who has finally anchored down the starting centre-back position and established himself as one of the top defenders in the league. Together the pair have conceded just 21 goals in 29 league games.

On the bench: Joe Gomez, Liverpool

Jonny Evans has gone through something of a rebirth since joining Leicester City, showing Man United what they gave up when the club decided to sell him in 2015 and keep both Chris Smalling and Phil Jones.

The Northern Irishman formed a great defensive partnership with Harry Maguire last season, but has hardly missed the Englishman since his departure to Old Trafford last summer. Caglar Soyuncu has filled in wonderfully, proving to be one of the surprise packages of 2019/20.

Jurgen Klopp’s decision to move the ball through his full-backs instead of through midfield has paid off handsomely, with Andy Robertson forming one half of a dynamic partnership with Alexander-Arnold on his opposite side.

The Scot has provided a goal and seven assists to Liverpool‘s title charge this season, but the greatest contribution he has made to the cause is in the manner he repeatedly carries the ball into the attacking third for the team. Out of all the defenders in the league, only Harry Maguire and Ricardo Pereira have progressed the ball forward more than his 5339 yards.

When Robertson arrived at Anfield from relegated Hull City in 2017, the transfer was hardly seen as a coup de grace, but it has turned out to be one of the shrewdest signings of the FSG era.

If the Premier League season was called to an end tomorrow, Kevin De Bruyne would finish top of the assist charts in England for the third time in his career. His 17 assists are just three off the overall record with 10 games remaining. His 25 goal involvements are also the most of any player in the top flight.

Simply put, the Belgian is the best central midfielder in the world right now.

On the bench: Mateo Kovacic, Chelsea

Why De Bruyne should be crowned Player of the Year

Aside from Kevin De Bruyne, midfield was a tricky one to decide with so many players who have played at a relatively similar level this season. Leicester, however, dominate the conversation, possessing a midfield that is Champions League worthy.

James Maddison has been the creative lynchpin of the side since joining from Norwich in 2018, providing ten assists in the league over that period. This season his 75 attempted assists are the joint-second most (with Alexander-Arnold) of any player in the league, with De Bruyne predictably top of that particular chart.

The playmaker went through a bit of a fallow period following the New Year (he joked on Instagram that he would have to take himself out of his own Fantasy Premier League team because of it), but he has shown enough this season to suggest he should be playing an important for the England national team.

Another creative force in our midfield, Jack Grealish has shown he can do more than just a few flashy tricks on the wing and bully Championship defences.

So far this season the Birmingham native has contributed seven goals and six assists to Aston Villa‘s fight for Premier League survival, and while it’s been a struggle for his hometown team he has shown himself to be one of the best midfield players in the top flight.

It’s bonkers to think he is yet to receive a call-up for the national team from Gareth Southgate, but perhaps he and Maddison should be the future of the England squad.

The most iconic imagery of the Premier League in the noughties

In his third season at the club Liverpool’s Mo Salah continues to be a rip-roaring force in the Premier League, providing 16 goals and six assists in 26 appearances. Although he is unlikely to ever repeat the 32-goal haul he managed in his first campaign in red, his 70 goals are second only to Alan Shearer (79) in a player’s first 100 league games.

The Egyptian is in contention for a third consecutive Golden Boot, with only Jamie Vardy (19) and Pierre-Emerick Aubameyang (17) ahead of him in the scoring charts. Salah leads the way in terms of shots (96), shots on target (40) and expected goals (14.5 xG), making a strong argument for still being the best player in the division currently.

On the bench: Richarlison, Everton

Revisiting the 1992/93 Premier League Team of the Year

Here’s something that doesn’t need pointing out: Sergio Aguero’s rate of scoring is absolutely ridiculous. Year after year the Argentine striker bangs in the goals as if it’s no bother to him, scoring 20 times or more in a season on six different occasions.

This season’s haul might be the most impressive though, as the Manchester City supremo has found the net 16 times in just 1400 minutes of game time. That’s a goal for every 90 minutes he has played, not just the best rate in the league right now but the best of his entire career.

Jamie Vardy is obviously leading the scoring charts, but his interminable dry spell in 2020 put him behind Aguero and Aubameyang in the conversation for the number 9 role.

On the bench: Pierre-Emerick Aubameyang, Arsenal

Eight of the best Premier League title-clinching goals ever

Liverpool wide forward Sadio Mané is having yet another stellar campaign, only this year he seems to have made marginal improvements in every department.

On a per 90 basis the number of shots he’s taking, the quality of them and the chances he’s creating have all increased on last season. The one thing that has taken a big leap is his assist-making, having laid on seven in this campaign compared to just one last year.

The Senegalese international’s improvement over these past four seasons have mirrored that of the team as a whole, and that is no coincidence as the Reds look set to claim the Premier League title in 2020.

Read: Tino Asprilla could win a game on his own – if he was in the mood