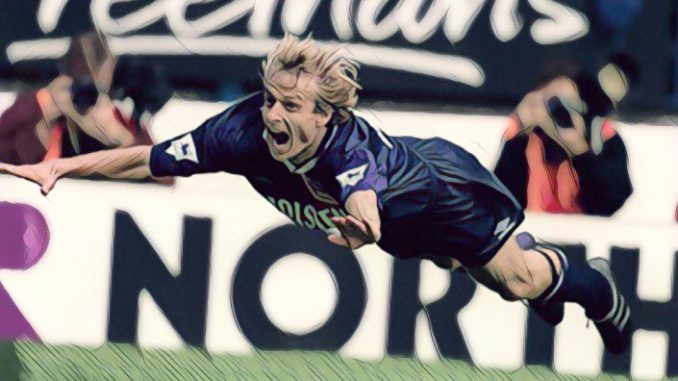 We’re continuing our nostalgic trip through the Premier League archives, rewinding back to the mid-nineties for a season which saw financially backed Blackburn Rovers upset the established elite to claim a first league title in 81 years.

Elsewhere Alan Shearer claimed the first Golden Boot of his record-breaking career, whilst Manchester United set a new landmark for the league’s biggest ever victory after thrashing Ipswich 9-0 – a record which still stands more than two decades later.

Our latest rewind looks back at the greatest players from each Premier League season, revisiting the 1994/95 PFA Team of the Year:

Tim Flowers made it back-to-back inclusions in the PFA Team of the Year after helping Blackburn to a first league title in more than eight decades, the goalkeeper cementing himself as one of the finest shot-stoppers in the Premier League during a memorable spell at Ewood Park.

Flowers had become the most expensive goalkeeper in the history of English football when signing for Blackburn from Southampton ahead of the previous season, though proved money well spent as Jack Walker’s millions delivered major silverware to the Lancashire side.

Amongst his season highlights was a sensation individual showing against Newcastle, keeping a vital clean sheet in the penultimate game of the season as Blackburn eventually finished just a point ahead of runners-up Manchester United.

Despite Flowers’ continued excellence, however, he failed to establish himself as England’s number one and won just 11 caps over an international career that spanned five years.

Rob Jones may well have been England’s right-back for a decade had it not been for cruel luck with injuries, the former Liverpool defender establishing himself as one of the division’s best during the early nineties.

Jones enjoyed a rapid rise after moving to Merseyside from fourth-tier Crewe and quickly made an impression, earning senior England recognition just four months after twice being named in the divisional Team of the Year.

The second of those came during the 1994/95 season, Jones starring at right-back as Liverpool finished fourth in the Premier League and secured League Cup success with victory over Bolton at Wembley.

Injury problems robbed Jones of the best years of his career, however, and he was forced to retire aged just 27-years-old after a brief spell at West Ham that failed to yield a single league appearance.

Manchester United’s Gary Pallister was included in the top flight’s Team of the Year for a fourth consecutive season following another season of consistency at Old Trafford, helping Sir Alex Ferguson’s side to the division’s best defensive record as the club narrowly finished as runners-up.

Pallister played every single league fixture for the Red Devils who endured a season of near misses, also surprisingly losing the FA Cup final to Everton at Wembley.

The centre-back was recognised as one of the finest in the Premier League at the end of the season, however, voted by his fellow professionals amongst the division’s best once more.

Colin Hendry returned to Blackburn following a brief spell at Manchester City and played a key part in the club’s rise to the summit of English football, earning promotion to the Premier League before establishing themselves as genuine contenders amid the backing of Jack Walker’s millions.

Blackburn delivered the ultimate success with a first league title in 81 years during the 1994/95 season, with Scotland international Hendry at the heart of it, making 38 league appearances and scoring four goals.

Amongst his goals included a vital winner at Aston Villa and a brave headed effort in a 1-1 draw at Leeds, interventions which proved crucial in the eventual destination of the title.

Le Saux overcame initial difficulties at Chelsea to thrive and earn a move to big-spending Blackburn, where he continued to enhance a reputation as one of the league’s most consistent left-backs.

His second season at the club saw Blackburn upset the established order to be crowned champions, working in tandem with Jason Wilcox down the left-hand side and providing a constant supply of ammunition to the likes of Alan Shearer and Chris Sutton.

His performances were rewarded with a breakthrough at international level with England and a first inclusion in the PFA Team of the Year, one of six Blackburn players recognised by their fellow professionals.

The common story told is that Blackburn owner Jack Walker questioned Kenny Dalglish’s interest in a certain Zinedine Zidane in the mid-nineties, on the basis that Rovers possessed the talents of Tim Sherwood in their midfield ranks.

Blackburn’s passing up on the chance to sign the future Ballon d’Or winner is perhaps unfairly used as a criticism of Sherwood’s abilities, a player who has the honour of being a Premier League-winning captain upon his CV.

Sherwood was a solid performer in a fine midfield partnership with David Batty at Ewood Park, overcoming a difficult start at the club to prove to be an indispensable presence as Dalglish’s side were crowned champions on the final day of the season.

He was named in the PFA Team of the Year after 38 appearances and five goals, including vital winning efforts against both Crystal Palace and Chelsea.

The early nineties saw Ince recognised as arguably the best midfielder in England’s top tier during a memorable six-year spell at Manchester United, an imposing box-to-box presence who was at the heart of the club’s early successes under Sir Alex Ferguson.

The 1994/95 campaign saw the midfielder once again voted into the league’s best XI after a standout season at Old Trafford, Ince included in the PFA Team of the Year for the third season in succession as the Red Devils finished as runners-up.

Despite the evident respect the self-titled ‘Guv’nor’ commanded from his fellow peers, the campaign proved his final at United as he was sold to Inter Milan at the end of the season.

Matt Le Tissier is regarded by most as the greatest player in Southampton’s history, with the midfielder a talismanic figure for the Saints throughout a memorable career long spell on the South Coast.

Southampton’s fortunes had declined from the pre-Premier League years and their fortunes in the rebranded league were largely dependent on the performances of Le Tissier, a player who few in the league’s history can match in terms of technical brilliance.

The 1994/95 season proved to be one of his very finest as he scored 29 goals in all competitions, whilst he also finished as the leading assist provider in the Premier League to earn inclusion in the Team of the Year, remarkably the only time in his career he was voted alongside the division’s best.

Klinsmann arrived in the Premier League ahead of the 1994/95 season at Tottenham, boasting a reputation as one of Europe’s finest finishers but also as a renowned cheat – a series of diving incidents leaving him far from popular upon his arrival in English football.

A single, stunning season in north London saw Klinsmann complete an incredible turnaround in popularity, however, beginning with a brilliant self-deprecating dive celebration after netting on his Spurs debut against Sheffield Wednesday.

Klinsmann continued to fire throughout the season and became a hugely popular figure with the Tottenham supporters, scoring 21 goals in the Premier League and 30 in all competitions to be named as the FWA Footballer of the Year.

Chris Sutton had made an impressive impact after coming through the academy ranks at Norwich City, scoring 25 Premier League goals in 1993/94 to earn an English-record £5m move to Blackburn.

Sutton’s arrival proved the final piece in the jigsaw for Kenny Dalglish’s side as he quickly struck up a superb understanding with Alan Shearer in attack, scoring 21 goals in all competitions.

The forward announced his arrival after scoring a hat-trick against Coventry in just the third game of the campaign, before netting twice in a thrilling 3-2 victory over title rivals Liverpool at Ewood Park.

Sutton finished the season as a Premier League winner after 15 league goals and a further 10 assists, a hugely impressive debut season with Blackburn seeing the striker named in the PFA Team of the Year for the first time.

The second half of Blackburn’s feared ‘SAS’ partnership, Alan Shearer was named in the PFA Team of the Year after a season in which he won a first ever Golden Boot to fire Rovers to the title.

Shearer enjoyed the best season of his career to date and his 34-goal haul included hat-tricks against QPR, West Ham and Ipswich, his goal-laden campaign matching the all-time record set by Newcastle’s Andy Cole just a season earlier – a figure which is yet to be beaten.