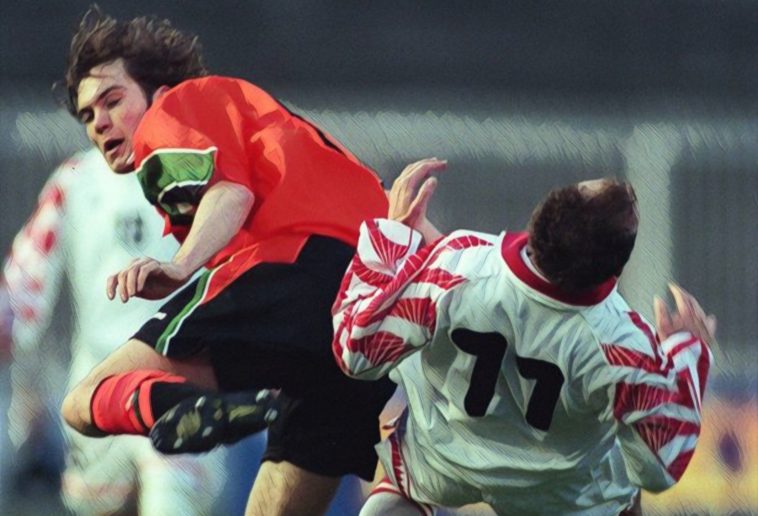 How do you know when you’ve reached your lowest point? The Republic of Ireland’s 1-0 defeat to Luxembourg at home feels like a nadir for the national side from which the team can surely only go upwards.

Even though the tiny European nation drew 0-0 with world champions France just last year, it still doesn’t feel anything less than an utter embarrassment for the Boys In Green to lose the Tax haven Derby. And there’s no guarantee things will get better any time soon.

But the Irish team has been here before, floored after a miserable defeat, and has been able to pick itself up again. Ireland are now winless in their last 11 matches, ten of which have come under current manager Stephen Kenny (three draws, seven defeats), with their last win coming almost two years ago.

At least it’s not Ireland’s worst ever run of games without victory. That came between 1968 and 1972 when the team failed to win in 21 attempts. Ideally they would avoid equalling that particular record with a win sooner rather than later.

So humiliating was this result that a new phrase entered the Irish football lexicon. “Had a Macedonia” became a byword for the worst trainer, who would be forced to wear a different colour bib during a session.

The 1998 World Cup qualifying campaign was Mick McCarthy’s first as Ireland boss. His side, decked out in a garish orange kit, came into this April encounter off the back of a 5-0 away win over Liechtenstein, a 3-0 home win against Macedonia, and a disappointing scoreless draw with Iceland in Dublin.

It started so well, Alan McLoughlin directing the ball into the goal with a diving header after just eight minutes. But two handballs in the box gave Macedonia two penalties, both of which were converted by Mitko Stojkovski.

Georgi Hristov made matters worse with a stunning strike in the 60th minute, and though a goal was pulled back through David Kelly, Ireland’s day fittingly ended in infamy. Jason McAteer, who had given away the first penalty, was sent off for almost decapitating Stojkovski with a flying kick in injury-time.

The Irish Independent dubbed the team “Mick’s Macedonkies”, while the Irish Examiner’s Billy George wrote that “Ireland’s fall from grace was as complete as it was spectacular and totally without reason for mitigation.”

Just three years after reaching the last 16 at USA 94, any hopes of automatic qualification were killed by a supposed minnow of world football. The Macedonians inflicted real trauma just two years later when, with Ireland in pole position to qualify for Euro 2000, a last minute equaliser dropped them into second place in the group. They subsequently lost to Turkey in a playoff.

Few people have ever built up such a well of goodwill as Steve Staunton had done with the Irish public over the course of a very good career. Fewer still have destroyed all that goodwill in the space of a year.

The former Liverpool full-back took the reins in 2006 after being appointed by now disgraced CEO John Delaney to guide them to Euro 2008. His bid for qualification kicked off with a 1-0 defeat in Germany, before bursting into flames by the second match of the campaign.

Just like the defeat to Macedonia nine years earlier, Ireland took the lead in Cyprus after eight minutes, on this occasion through Stephen Ireland. But repeated mistakes gifted the home side several cheap goals.

The Cypriots equalised just 90 seconds later and were in the lead by the 16th minute following a Paddy Kenny error. Richard Dunne equalised before half-time, but three second-half goals and a second bookable offence for Dunne completed one of the most miserable nights in Irish football history.

The result says it all really. There’s no shame in losing to, or even being destroyed by, Germany. But it marked a low point for the Giovanni Trapattoni era and the beginning of the end of his reign.

Marco Reus scored a brace in the first-half to make it 2-0 at the break, before Mesut Özil dispatched a penalty after the interval. Miroslav Klose scored from an acute angle to make it four, before Toni Kroos completed the rout with a marvellous brace of his own, both goals coming from range.

Andy Keogh headed in for Ireland from a Robbie Brady corner to give Ireland the barest of consolations, but there was no dressing this up. It was an utter humiliation, one that yours truly had to endure in person.

The Germans would go on to win the World Cup two years later, although they couldn’t beat Ireland when the pair were drawn together for the Euro 2016 qualifiers. The sides drew 1-1 in Gelsenkirchen, before Shane Long secured a famous 1-0 victory at Lansdowne Road in October 2015.

Six of Ireland’s greatest ever wins: England, Netherlands and conquering the world champions

Getting hockeyed by the soon-to-be world champions is one thing, but Denmark? A fine footballing nation with some great players, for sure, but Germany they are not.

Once more Ireland took an early lead as Shane Duffy headed home in the sixth minute. They could have even extended their lead around the 23rd minute with a couple of decent chances in quick succession.

An own goal from Cyrus Christie tied things up, before Christian Eriksen gave the Danes the lead with a strike that rocked the underside of the crossbar before going in.

From that point Ireland capitulated. Martin O’Neill took off David Meyler and Harry Arter for Wes Hoolahan and Aiden McGeady at the interval to get back into the tie, but completely sacrificed the midfield in doing so.

Eriksen had a field day with all of the space granted to him, getting his hat-trick by the 73rd minute. To complete the ignominy of a calamitous night, Nicklas Bendtner scored a penalty in injury-time.

Read: Granny Rule XI: The best English-born footballers to play for Ireland in each position

See Also: From Italia 90 to Euro 2016 – Five of the best Ireland jerseys of all-time