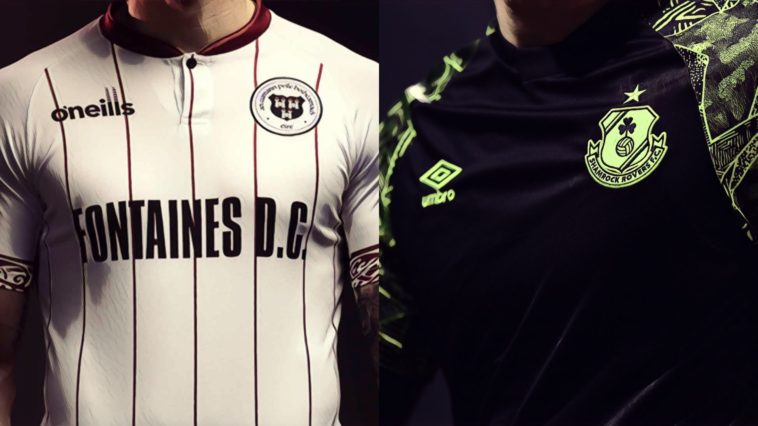 The League of Ireland is finally back after the longest offseason in living memory, which means we have a raft of new kits to pore over.

This season’s selection is, admittedly, not as good as last year’s, but many of the jerseys on offer are, as John Giles might say, good not great. A solid lot, basically.

So in no particular order, here are the finest kits from the Premier Division of the SSE Airtricity League this year.

The best League of Ireland kits we’ll see in the 2021 season:

In recent years Bohemians have become known for doing things a bit differently with their new kits. Two years ago they gained worldwide notoriety for their Bob Marley design, only for the jersey to be pulled due to a copyright issue. Last year’s third jersey also received a ton of attention for bearing the “Refugees Welcome” message, the proceeds of which were donated to a charity supporting asylum seekers.

This season’s third kit from O’Neills has also attracted headlines, as the club has partnered with popular Dublin band Fontaines DC. The white top with red pinstripes is a one-off and has already been sold in 24 countries.

The jersey pays homage to Dublin and Ireland in its design, which features Celtic knotwork, the Poolbeg towers, Grattan Bridge lamps, the ‘Dublin in the rain is mine’ Fontaines lyric, and Patrick Pearse’s quote ‘Beware of the Risen People’ from the wall of Kilmainham Gaol.

15 percent of profits from all sales will go to Focus Ireland, a body that has been tackling homelessness for 35 years, with the club saying they are aware of their “obligation to use football as a force for good whenever possible”.

“Bohemians and the work they do on a social inclusion, humanitarian and the community development level is something that we are proud to support in any way that we can,” said Tom Coll, drummer for Fontaines DC.

The best League of Ireland exports to the Premier League: McGrath, Keane, Coleman

I’ve always found claret and blue to be a bit of an odd colour combination that can easily go wrong on a jersey, but Drogheda United will be sporting one of the best I’ve seen in this category, albeit with white as the primary colour.

The Louth outfit return to the top-flight this season in some style, wearing this excellent Umbro design. The claret details and sky blue sleeves look well against the white torso, while the vertical two-tone sash is a nice touch.

Shamrock Rovers’ home kit didn’t even make the longlist for this piece, mainly because it’s the same boring effort as last year but with a much uglier sponsor. But Umbro have done a nice job on the champions’ third jersey.

The jet black torso contrasted with neon green patterns on the sleeves is marvellous. It somewhat resembles a training top, but I won’t hold that against it. It just looks really good.

A close up of the new third jersey being worn for the first time tonight 💚🖤
Available online here https://t.co/zAEEwgpOaw pic.twitter.com/tTNe9A5bPA

Dundalk’s journey from near extinction to Europa League dreamland

This writer was a big fan of what Joma did last year with Finn Harps’ home jersey and they’ve done another good job this year.

Our 2021 Home Jersey in partnership with @JomaSportIRL 🤝

The Spanish manufacturer has made a habit of giving the Donegal outfit abstract designs, and we approve. This excellent piece of kit is definitely going to stand out amongst a sea of fairly plain templates this season.

The Battle of Oriel Park: When The Troubles and football collided

Bohs or Drogheda’s home kits probably deserve a spot here too, but in the interest of spreading the love I’m including the next best on my list: Longford Town’s home jersey.

Macron have had a habit of making some pretty turgid kits over the years, although they have improved their output in more recent times.

The Italian manufacturer has certainly done well on De Town’s latest top, letting the striking red and black stripes speak for themselves rather than over complicating matters.

Home and away Jerseys back in stock available to order now. ⤵️https://t.co/mcniVFH4AB#Town2021 🔴⚫⚽ pic.twitter.com/k5lq6DAyD9

There’s a hint of vintage AC Milan in there, while the sponsorship is clear but unobtrusive, as it should be. A Longford-supporting friend of mine described it as “the best Town jersey years”, which is obviously the highest compliment you can get in the world of football kits.

Read: Ron Atkinson: ‘I used to joke with Jack that I had more Irish players than he did’