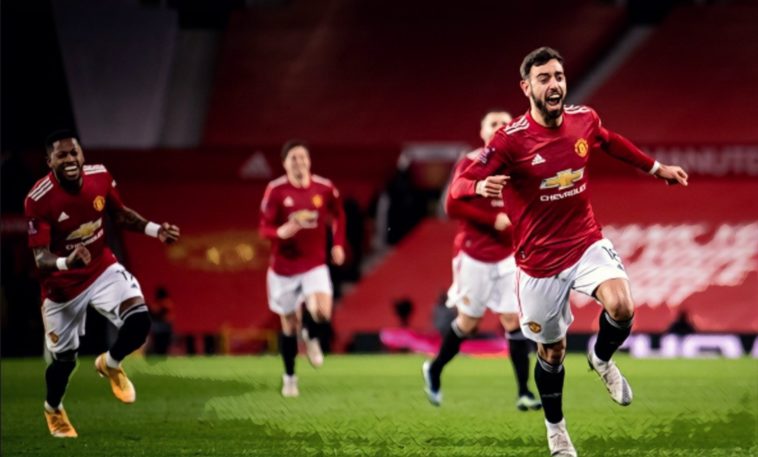 The FA Cup fourth round proper offered us entertaining matchups, sublime goals, and some memorable moments over the weekend.

A Mo Salah brace was not enough to see Liverpool through to the fifth round as Manchester United beat their longtime foes for the tenth time in FA Cup history.

This was an excellent battle between two full strength sides, far better than some of their recent meetings in the Premier League where more has been at stake.

The visitors took the lead early on at Old Trafford, before Mason Greenwood equalised not long after. It was a back-and-forth encounter than saw Marcus Rashford score to put United ahead for the first time in the game just after the interval, only for Salah to equalise ten minutes later.

At this point Ole Gunnar Solskjaer and Jürgen Klopp made changes signalling their intent to go and win this tie, Bruno Fernandes and Sadio Mané coming on for their respective teams. It was the latter switch that made the difference, as the playmaker’s low driven free kick found the far corner of Liverpool’s net.

Man United continue on their upward trajectory, while Liverpool keep trending in the other direction. The Merseysiders have now just won one of five games in 2021, scoring six and conceding just as many.

Man United vs Liverpool: The most famous cup meetings between the hated rivals

Southampton knock out the holders

There will be a new FA Cup champion following Southampton’s 1-0 win over Arsenal on Saturday. Gabriel Magalhães inadvertently diverted Kyle Walker-Peters’ cross past his own goalkeeper as the Gunners failed to lay a glove on the hosts.

The holders exit the 2020-21 #EmiratesFACup following a sturdy Southampton performance.

The Saints' win sets up a fifth round tie with fellow Premier League side Wolves. pic.twitter.com/s2SSO8IMTS

With the Saints impressing everyone this season, a long cup run would be the cherry on top of what’s been a very good campaign so far. Southampton last contested a final in 2017, when they were defeated by Manchester United, while their only FA Cup victory came over the same opposition in 1976.

Southampton play Wolves in the next round.

Alfie May put Cheltenham Town into dreamland when he put the underdogs into the lead in the 59th minute against Manchester City on Saturday night, but inevitably the Premier League outfit had far too much firepower for them.

Phil Foden, Gabriel Jesus and Ferran Torres all netted in the final ten minutes of the game to avoid what would have one of the biggest cup shocks in recent memory. But for 22 brief minutes they believed the impossible was within reach.

The best Premier League statistics of the past week

Thierry Small became Everton’s youngest ever player at 16 years and 176 days when he was substituted on during the club’s 3-0 win over Sheffield Wednesday on Sunday night.

Small was only a few weeks old when Wayne Rooney signed for Man United, while Dry Your Eyes by The Streets was number two in the UK charts the week he was born.

When Chelsea raced into a two-goal lead after just 17 minutes thanks to a Tammy Abraham brace, it seemed highly likely that the game would get away from Luton Town at Stamford Bridge. That didn’t happen, as the Hatters caused the hosts a few issues during the 3-1 defeat.

Jordan Clark pulled one back for the visitors after half an hour, giving them cause to believe. Luton forced a really good save out of Kepa Arrizabalaga and for a short period it felt like they might be the more likely team to score again.

While this result gave some much needed respite to Frank Lampard and his beleaguered troops, some recurring themes reared their ugly head, namely Kepa making an error leading to a goal and Timo Werner failing to score, even when given the chance from 12 yards.

Southampton’s opponents in the next will be Wolves after they defeated non-league Chorley by a solitary goal. But what a goal it was.