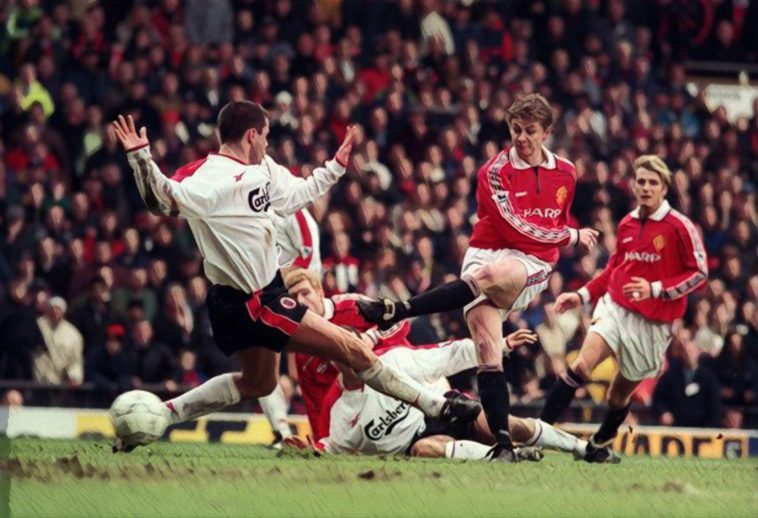 Liverpool and Manchester United will renew their rivalry in the FA Cup this Sunday having just recently faced off in the Premier League.

Man United have had the better of their Liverpudlian foes, winning nine of their 12 meetings in the competition, while they also have the upper hand in the League Cup, winning three of their five clashes.

Here’s hoping that this latest instalment will provide more entertainment than last week’s match, and perhaps even create a few moments as memorable as some of their past meetings in cup competitions.

On January 24, 1999, Ole Gunnar Solskjaer scored the winner for Manchester United in the FA Cup fourth round against Liverpool at Old Trafford.

On January 24, 2021, Ole Gunnar Solskjaer manages Manchester United in the FA Cup fourth round against Liverpool at Old Trafford.

Is history about to repeat itself?

When Ole Gunnar Solskjaer knocked Liverpool out from the FA Cup in 1999. 😅🔴

Michael Owen opened the scoring, but in typical United fashion they came back to win thanks to goals from Dwight Yorke and his Norwegian strike partner.

When Manchester United and Liverpool met in the 1996 FA Cup final, one side was dominating the English game having won three of the last four Premier League titles and the other one’s glory days were fading fast in the wing mirror.

This was not just a decider between two heated rivals, but between the two most attacking teams in the top-flight. Sounds like a great matchup, right? Wrong!

The contest itself was rather forgettable aside from one moment of pure magic from Eric Cantona, who somehow volleyed the ball into the net while falling backwards. Magnifique!

What this match is famous for, is the god awful white suits that Liverpool wore before the final. It was almost the perfect analogy for what the team had become; an unserious outfit who were more concerned with aesthetics than success.

These two sides met in the last four of the FA Cup when Liverpool were at their pomp, having won the previous three league titles and were about to play in their third European Cup final in five seasons.

Man United were unable to get the league title monkey off their back in the eighties, but they were a proper cup team during that period and they bloodied the Merseysiders nose a few times in knockout competitions.

1985 was one such time this happened. They met at Goodison Park for a ding-dong battle that went all the way to extra-time and only for a Paul Walsh equaliser in the 117th minute to make it 2-2, United would’ve progressed at the first time of asking.

The replay at Maine Road witnessed an uncharacteristic error from Paul McGrath, who headed the ball into his own net to give Liverpool the lead in the first-half.

But almost immediately after the interval, Bryan Robson picked up the ball in midfield, played a one-two with Gordon Strachan before unleashing an almighty belter of a strike into the net. It was a world class goal to match his ability, which was followed up by a classy finish from Mark Hughes to complete the comeback in the space of 11 minutes.

In the final at Wembley they faced an Everton that not only won the league title that year, but had thrashed United 5-0 earlier in the season. Luckily they had Norman Whiteside on hand to score one of the best cup final goals ever to bring the trophy back to Manchester for the second time in three years.

Nine years on from winning the European Cup, Man United were on the cusp of being usurped by Liverpool as the preeminent force in English football.

The Reds had already won the league title and were also about to play in the European Cup final in Rome, meaning they were on for the Treble.

It was United who took the lead in the 51st minute, however, when Stuart Pearson struck the ball powerfully past Ray Clemence.

Commentator John Motson subsequently remarked “there’s a saying in football that Liverpool are at their most dangerous when they’re behind.” That turned out to be the case, as the Reds equalised only moments later. Jimmy Case swivelled on the edge of the box before hitting a sweetly struck half volley past the helpless Alex Stepney.

Man United did not lie down for long themselves, Jimmy Greenhoff getting the better of Tommy Smith before looping the ball past Clemence and Phil Neal. All of the goals came within a five minute period early on in the second-half, but it provided enough drama to become a truly memorable decider.

In each of the instances mentioned in this list, Man United defeated their arch rivals on their way to picking up the trophy, so it’s only fair we end on one where the opposite was the case.

United, who won the Premier League title that season, were naturally the favourites going into the League Cup final in 2003. But Liverpool had become cup specialists under Gerard Houllier, winning a treble of knockout competitions in 2001, as well as the Charity Shield and the Uefa Super Cup the following season.

The Red Devils came so close to taking the initiative, however, when Ruud van Nistelrooy came within a whisker of opening the scoring in the first-half, but his effort went narrowly wide.

In the manner for which he soon became famous, Steven Gerrard scored a golazo six minutes from the break, driving a long-range strike that dipped up and over Fabien Barthez in nets.

In an entertaining contest that featured a hatful of really good chances, United had plenty of opportunities to equalise. But Liverpool defended as if their life depended on it, with Jerzy Dudek making several saves while Stephane Henchoz made one block close to goal that could have gone anywhere.

With just five minutes remaining on the clock, United threw as many players forward as possible, leaving them vulnerable to the counter. That’s exactly what happened, as Dietmar Hamann intercepted a loose pass before setting up Michael Owen with a one-v-one on goal. The striker slotted it past the French goalkeeper to seal victory late on.