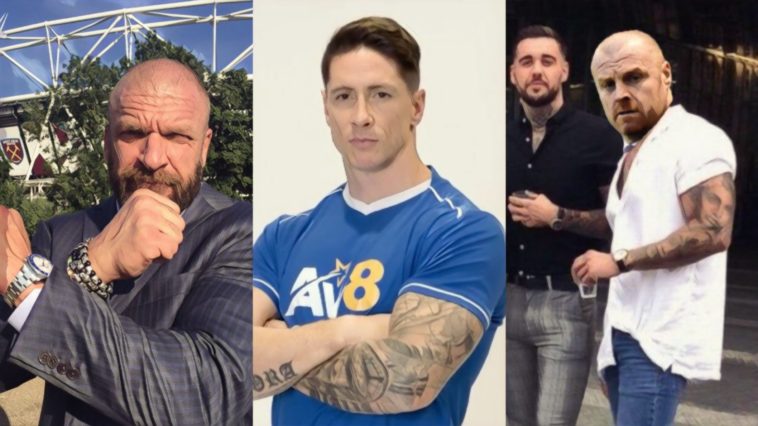 The funniest tweets from the world of football this week, featuring some of the memes that emanated from Sean Dyche’s confrontation with Jürgen Klopp, Fernando Torres’ new massive arms, James Maddison’s brilliant interview, and another Premier League club adopts a WWE theme for its halftime entertainment.

Who knew we needed Sean Dyche memes in our lives?

Dyche and his 3 sons waiting for Klopp outside Anfield 🤣 pic.twitter.com/OSnnh3DK0O

The internet is a great place sometimes 🤣 pic.twitter.com/WL9ToO1t8Y

Dyche to Klopp after Brexit-Ball Burnley scrape a 1-0 win. pic.twitter.com/YAbS07ZLbO

Too be fair Dyche would ruin Klopp! 😂

You know a football club means business when they come out to ‘The Game’.

This is theatrical perfection.

We loved this interview with James Maddison.

🗣 "We looked at Chelsea and we knew they switch off sometimes from set pieces."
🗣 "@Carra23 said he needs to get his numbers up if he wants to be a top player."

James Maddison speaks to Sky Sports about Leicester's win that sends them top of the Premier League. pic.twitter.com/yYjV31xHX5

Here’s an rare photo of Maddison as a child with his dad.

My new WhatsApp photo for the foreseeable 😂😂 pic.twitter.com/NDVag7YkmB

It’s nice to see Fernando Torres is taking it easy in retirement.

Fernando Torres and the lads. pic.twitter.com/ZmFKONKMnl

The Spaniard is almost as jacked as Michail Antonio…

Tyrone Mings admitted he didn’t know a fundamental rule of football after that Man City goal in midweek.

Who doesn’t know the offside rule then… pic.twitter.com/lwFxskHi6K

The best Premier League statistics of the past week

Aston Villa got over it quickly to beat Newcastle at the weekend, not that you’d know it judging by Jack Grealish’s expression on the bench.

my face when they call me to eat while I'm in a call of duty match pic.twitter.com/n5w6TVePZS

Man City squeezed past Cheltenham Town at the final furlong…

Cristiano Ronaldo broke the all-time goalscoring record – or did he?

Josef Bican after Putting 7 past the medical reserves in ww2 pic.twitter.com/u9pCt4Mcvv

The five greatest goalscorers of all time: Ronaldo, Messi and why the numbers are contentious

Linfield playing the countdown theme waiting for Warrenpoint to come out for the second half 😂😂 pic.twitter.com/Fq4DLyomfe

If this doesn’t get Charlie Austin back to Swindon Town, nothing will.

Staying close to home (in both senses) for this week's Loftus Road broadcast, as featured on The Football's On (@btsport tonight, 8:15) and for the specific attention of @chazaustin10 pic.twitter.com/Jt47TLWpX9

He came from Greece he had a thirst for Norwich https://t.co/LKBXYkaC1d

Donald Trump already on the hunt for a new job.

If football pundits were political analysts:

"Is Joe Biden the right appointment? I guess only time will tell. Yes he's got a lot of experience as a Vice President, but we've seen in the past with your Brian Kidds and your Steve McClarens how hard it can be to make that step up." pic.twitter.com/96yIHoYsaV

They call this a Mike Ashley Special.

Refusing to close down

Five years ago this week Jürgen Klopp made his greatest tactical adjustment for Liverpool 5-4 Norwich.

Klopp knew what I was about… 👀 😂 #Number9 pic.twitter.com/BMSTynBy8z

Read: Man United vs Liverpool: The most famous cup meetings between the hated rivals