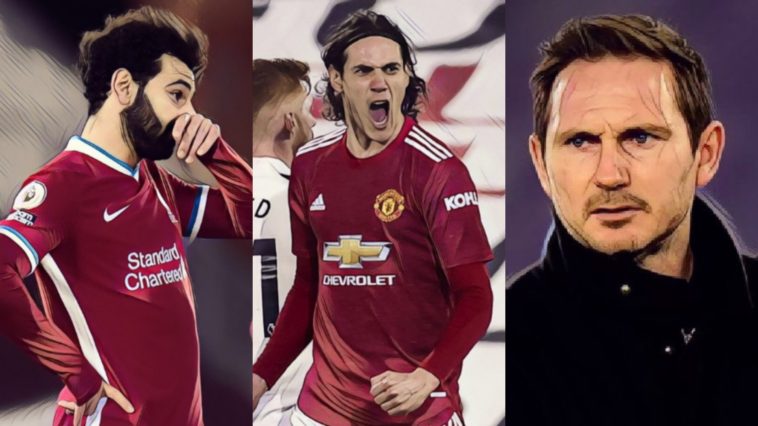 Every week we dive into the numbers and statistics behind the Premier League action of the past seven days.

Today we look at Liverpool’s awful form and the end of their four-year unbeaten run at home and contrast that with Manchester United’s ongoing undefeated away streak. There’s also Frank Lampard’s worsening situation at Chelsea and why Aston Villa are well in for top four contention.

All good things must come to an end. For the first time since 2017 Liverpool lost a home game, going down 1-0 to Burnley on Thursday. The Merseyside outfit are usually imperious at Anfield, having gone unbeaten there for 68 league matches. In truth it was a result that has been brewing all month.

As a result Liverpool have now gone five Premier League games without a win (three draw, two defeats) for only the second time under Klopp (January-February 2017).

The host’s performance was vaguely reminiscent of Manchester United’s infamous overuse of crosses against Fulham in February 2014, sending in 81 that day. Liverpool crossed the ball into the box 31 times on this occasion, nowhere near the same, but it felt like they no other plan to beat the visitors. Burnley, as you would expect, ably dealt with it, winning 24 aerials compared to Liverpool’s 15.

Liverpool have put in 142 crosses in their last 4 Premier League games without scoring a goal.

For Sadio Mané, who joined the club in 2016, it was a first home defeat in the league, as it was for Mo Salah, Andy Robertson, Alisson, Alex Oxlade-Chamberlain, Fabinho, and Xherdan Shaqiri.

As for Burnley, this was their first win at the ground since 1974 and for that they can not only thank Ashley Barnes for converting the penalty, but Nick Pope for making crucial saves yet again. The England international has made 14 saves in his last two meetings with Liverpool, including six stops here.

Last three Liverpool home league games in which the opposition GK made at least 6 saves and LFC didn’t win:

Following a 2-1 win over Fulham on Wednesday, Manchester United have now gone a full calendar year without defeat away from home in the Premier League.

Man United last lost on the road when Liverpool won 2-0 at Anfield on 19 January, 2019; they have since gone 17 away games unbeaten (14 wins, three draws), equalling their longest unbeaten away run in top-flight history (17 between December 1998 and September 1999).

Man Utd are unbeaten in 13 Premier League games, the longest ongoing run in the competition:

There was certainly a sense of deja vú when the hosts took the lead after four minutes, the fourth time this season United have conceded in the opening five minutes of a game. No team has more early concessions.

Ole Gunnar Solskjaer’s men have also gone behind ten times this term, but have managed to win from behind in seven of them, losing the other three. Only Newcastle United in 2001-02 (10) and Man Utd themselves in 2012-13 (9) have done so more in a single campaign.

What made the victory all the more impressive for United was that this was the 41st different game in which Fulham had led in all competitions under Scott Parker, but the first time they had lost such a game (W34 D6).

Fulham vs Manchester United pass maps.
– First half looks more like an orthodox 4-2-3-1
– Second half reverted back to a more "standard" 3-4-1-2 pic.twitter.com/23OHynO56d

FPL Podcast: Which Premier League teams to avoid and our GW20 picks

As I said on this week’s episode of The Fantasy Faithful podcast, Chelsea looked “useless, toothless and rudderless” against Leicester City in midweek.

The 2-0 defeat to the Foxes mean the Blues have won just twice in all competitions since Christmas, scraping past ten-man Fulham and hammering Morecambe in the FA Cup. With just one win in five in the league, they are 14th in the form table over the past five gameweeks.

Frank Lampard, whose position is coming under increasing pressure, has now won just 52 percent of his matches in all competitions since taking charge; only Andre Villa Boas had a worse win rate among permanent Chelsea managers in the Roman Abramovich era.

Frank Lampard has a loss percentage as a Premier League manager of 31.5%. A fraction better than Trevor Francis. A fraction worse than John Gregory.

The result also continued Chelsea’s terrible defensive record away from home under Lampard. Since the start of last season they have conceded 50 away goals in the Premier league; only Newcastle (52) have conceded more.

The west London outfit have kept just five clean sheets out of a possible 29 in that period, a measly 17 percent of the time. Among Chelsea managers who have taken charge of ten or more away games, that is the lowest percentage.

The garden is far rosier for Leicester, who ended Tuesday on top of the league for the first time since they won the title in 2015/16. Brendan Rodgers has now defeated all 34 of the Premier League sides he has come up against. He had previously failed to beat Chelsea in 11 meetings (seven draws, four losses).

Aston Villa provide the quality at both ends

Saturday saw Newcastle United’s dreadful form continue with a 2-0 defeat at Villa Park on Saturday night. The Magpies had the first shot on target, but failed to register a single attempt on target thereafter. Steve Bruce’s men are yet to win a Premier League game in 2021, with their last three points coming against West Brom on December 12.

Aston Villa are on the opposite trajectory, however, and look excellent right now. After the disappointment of their defeat against Manchester City despite performing so well, they were miles better than the visitors. They took 14 shots, twice as many as Newcastle, for 2.6xG.

Ollie Watkins opened the scoring with his third headed goal of the season, with only Dominic Calvert-Lewin (four) scoring more with his noggin. Jack Grealish, who set up Bertrand Traoré for the second, has now provided eight assists in 17 Premier League appearances for Villa this season, more than he had in his first four seasons in the competition combined (seven in 70 games).

But it’s the turnaround in the Birmingham outfit’s defence that is really worth noting. The Villans have kept a clean sheet in nine of their 17 Premier League games this season, with only Manchester City (10) recording a shutout more often.

Villa have turned themselves into an all-round team and shouldn’t be discounted from the top four race.

See Also: The Magic of the FA Cup: Recalling one of the craziest fourth round matchdays ever