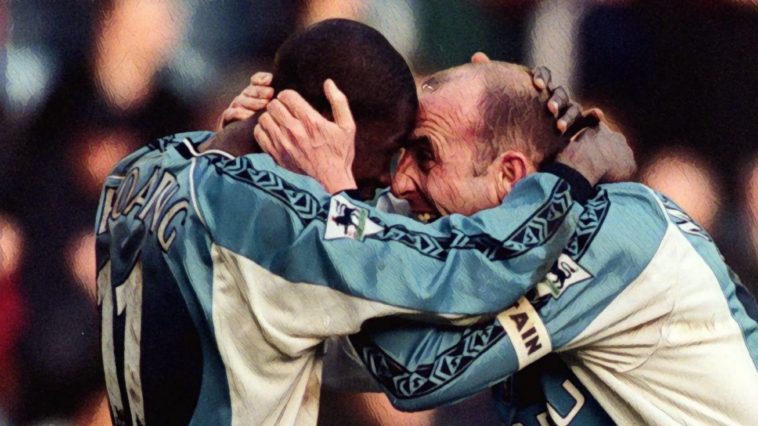 Growing up in the eighties and loving football so much that it hurt in the nineties, Coventry City was always a constant fixture in my life.

In 1987 they won the FA Cup, of course, and furthermore did so in one of the most memorable and thrilling cup finals in the modern era. It even included a diving header that could be copied down the park for some time after.

In May 1997 they somehow pulled off a ‘great escape’, alluding the clutches of relegation with a late revival that saw them win at Anfield and White Hart Lane. Indeed, this was a trademark characteristic of the club: across three decades they stayed up on the final day an incredible ten times.

Those stand-out moments aside though Coventry would occasionally give Liverpool or Manchester United a bloody nose and would routinely play your team twice a season. Otherwise, they were just… there.

Now I appreciate how that sounds. Just there. It sounds derogatory, even dismissive, and yet it’s not meant in that way at all. Longevity is unquestionably the most under-rated quality in sport and for a club of their standing to remain in the top-flight for 34 years – from 1967 to 2001 – amounts to a truly outstanding feat. In that time plenty of bigger and significantly better resourced outfits fell off the radar. Plenty of household names stumbled into semi-obscurity.

More so – and this is important – there was, and is, a lot to like about the Sky Blues. Their badge is mad and unique, featuring an elephant for no discernible reason. Their kits have consistently been splendid and we’re not just talking about the Admiral years, infamous brown kit and all, but some of the Le Coq Sportif numbers rocked too.

Highfield Road meanwhile was a small but ferocious cauldron on the big occasions, seating just 23,500 but with the sound usually turned right up. And perhaps most commendably of all, no matter who was in charge and no matter the vintage, Coventry played a decent and attractive brand of football.

"A splendid goal from the Coventry captain to level proceedings."

Gary McAllister draws the Sky Blues level at Goodison Park back in November 1996 with this superb strike. #PUSB pic.twitter.com/12bfGQdySR

From a neutral perspective the Midlands club were not just admired from afar for their staying power. They were nevertheless than a welcome member of the Premier League.

Then in the autumn of 1997 something strange happened. And stranger still it took place just a few short months after a side recently inherited by Gordon Strachan retained their top-flight status by the skin of their teeth: Coventry got good.

Yet anyone who saw them that year will testify that this was a brilliant collective, one that arguably could have ‘done a Leicester’ with the addition of a top-class defender or two.

Front and centre and at the heart of Coventry’s exploits was Dion Dublin, prolific once again after finishing as City’s top marksman for the three previous campaigns. Only this time he notched 18, sharing the Premier League Golden Boot award with Michael Owen and Chris Sutton.

Alongside him, forever ferreting and fleet-footed, was Darren Huckerby. Together they made up a classic little-and-large strike partnership, only with a twist because here it was the ‘target man’ who grabbed the goals while Huckerby set them up, carving out chances galore by bewitching opponents through his pace and trickery.

Behind them Gary McAllister schemed, pulling the proverbial strings in midfield and essentially making the game twice as easy for his ten team-mates; sharing the creative duties was Noel Whelan, undoubtedly an under-appreciated talent of the nineties. Shifted out to the left Whelan played a key role in several victories that made people sit up and take notice, namely the exhilarating and unforgettable 3-2 win over Manchester United at Christmas that is still talked about in the West Midlands to this day.

New signing George Boateng was the energy of the side, though defender Paul Telfer deserves a shout-out too for his versatility that sometimes had him stationed ahead of a back four. Then we get to a defence composed of names that are typically the last to be submitted in Sporacle quizzes.

Liam Daish. Gary Breen. Paul Williams. The latter, for whatever reason, was never snapped up by a top six side despite being consistently excellent for a number of years. On the subject of consistency there was another summer recruit, Roland Nilsson, at right-back and consummate in every circumstance.

The Swede was class personified week in, week out and it says much about Strachan’s transfer nous at the time that he was secured for a measly £200,000 from Helsingborgs. Nilsson eventually succeeded the man who signed him in the hot-seat.

In sticks was Steve Ogrizovic. Oggy. The ever-reliable former policeman with a face sculpted from left-over clay and hands the size of frying pans.

This balanced, fluid and hard-working side – still propelled by the adrenaline of staying up against the odds that May – began the season in spectacular fashion, beating Chelsea in a five-goal thriller courtesy of a Dublin hat-trick. A succession of draws subsequently revealed they were hard to get the better of.

Alas, the draws racked up throughout the season, costing them a greater legacy. Still, among the stalemates was a hammering of Spurs, an uplifting comeback against the Arsenal of Vieira and Bergkamp, and the aforementioned triumph over United that will be a YouTube favourite until the end of days.

Before writing this I was under the false impression that Coventry finished around sixth in the late nineties, such is my vivid recollection of Huckerby haunting and taunting defenders and Gary Mac doing Gary Mac things. It was a surprise to learn the best they mustered was 11th.

Yet success is relative and the reason why they were elevated by a memory playing tricks is down to how so damn cherished they are. Admired from afar, always welcomed by the Premier League.

Read: Peter Ndlovu: The first ever African footballer in the Premier League