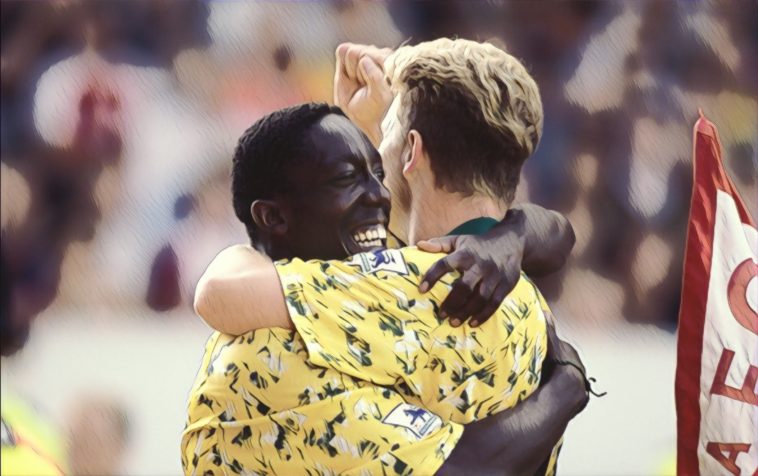 The Norwich City side that came so close to winning the inaugural Premier League title in 1992/93 remains a cherished collective for anyone who witnessed them.

Even just shy of three decades on memories of Mark Robins poaching goals and Ruel Fox scampering at pace down the right flank evoke a heartening feeling that now passes for nostalgia and this is so because back then – and ever since undiminished – that team who experienced the season of their lives fulfilled every criterion needed to be a neutral’s favourite.

The reasons for this will be explored very shortly. First though, let’s indulge in a little poetic licence.
Remember that kids television show you loved watching on a Saturday morning in your PJs? Remember that tuck shop long since demolished where you used to buy your Boost and a can of Fanta? That’s the Norwich side of the early nineties.

So why all the love? Well, for starters they were so damn agreeable, which is an obvious jumping off point and an important one too. Not one player among that group was a knob on the pitch or had a reputation for being a knob off it – a rarity worth celebrating.

Being a parochial club probably helped in that regard and what’s more, further elevated the surprise at their over-achievement that saw them eight points clear at the top after Christmas, then later return to the summit with just a month to spare. Even within the remit of this being ‘little’ Norwich it was an orbiting of the Premier League stratosphere that truly astounded.

The previous campaign saw them fighting relegation throughout and, having lost their best player Robert Fleck in the summer and with a new unproven manager at the helm in Mike Walker, the Canaries were widely tipped for the drop. Instead, Walker shrewdly knitted together a handful of experienced pros with some previously overlooked talent from the reserve pool. That’s when everything clicked.

These were players who had mostly navigated the scrapheap – Jon Polston, Ian Culverhouse, Mark Bowen, and Ian Crook had all been released by Spurs as teenagers – or were well familiar with the Central League. Players who all failed to better themselves beyond Carrow Road after spectacularly making a name for themselves, a young Chris Sutton aside. The absence of a single superstar to emerge from the pack is endearing.

But scoring high on the likeability scale and dramatically exceeding all expectations is not enough to have you warmly embraced to the national bosom. For proof of this we only need avert our gaze due south of Norwich to their arch-rivals Ipswich, who also had a fine time of it in the nineties. George Burley’s terrific side were evidently a cracking set of lads – has there ever been a player as inoffensive as Matty Holland? – who also somehow broke through the top flight’s glass ceiling yet these days they are largely forgotten, respected only when recalled.

That’s because two key elements were missing at Portman Road that was in abundance one county over. A team has to be a little bit mad – by any definition you wish – and there must ideally too be some pathos mixed in with the apogee.

On taking the reins Walker introduced a sweeper system that was common enough for that era, only for him two centre-backs and a libero wasn’t sufficient. Instead, he went with three defenders and a transformed Ian Culverhouse in the role that was so in vogue after its success at the 1990 World Cup.

If that suggests to you that Norwich were a defensive side, then think again. They were fluid and adventurous, forever looking to create rather than negate and this strange mish-mash of set-up and philosophy not only confused the life out of their peers but led inevitably to some bizarrely conflicting results. In the autumn they beat Chelsea 3-2 at Stamford Bridge but soon after were hammered 7-1 by Blackburn. In the spring they recovered from a 5-1 trouncing at Spurs by thumping Leeds 4-2.Ultimately, this is a side who finished third in the table with a negative goal difference. That’s insane.

Day 4 of stopping #NoVid19/20 is this Mark Robins goal against Chelsea in 1992. Remembered by @patchyend. #ncfc #otbc pic.twitter.com/PkuEZR3XpH

As for pathos, that arrived two-fold, first when Norwich lost their rhythm in December at the precise moment the country was fully recognising their brilliance. Later a second wind took them into a title six-pointer against Manchester United, a game that more than any other has come to define their legacy. Within eight ruthless minutes the visitors were three goals up and Norwich’s dream was over.

Let’s face it, us Brits love a valiant loser, the braver and more unfortunate the better. That’s why Leicester’s miracle-workers will always astonish us, but they will never truly be loved as much as if they had thrown away their 2016 title bid at the last. That’s why the Norwich of Gunn, Butterworth and Goss is truly loved.

Last but by no means least, there is the kit to consider. Arguably the most divisive shirt since Coventry’s brown number of the 70s, its garish design prompted art deco analogies from its backers. Others meanwhile viewed it as a ghastly aberration, a shirt that aptly looked like it been laid at the bottom of a bird cage, splattered in canary droppings.

It is August 15th 1992 and the all-singing, all-dancing, brand spanking new Premier League is only ninety minutes old before it has its first big story. Norwich, heavily fancied for relegation, are two down at the break at Highbury and teams typically don’t come back from that, not against George Graham’s indomitable defence of Tony Adams, Steve Bould and company.

Except Norwich do, and furthermore they storm back to win 4-2 with half-time sub Mark Robins scoring twice, the second of which is an audacious 25 yard chip over David Seaman.

Read: Why we still love that entertaining Coventry side of the nineties