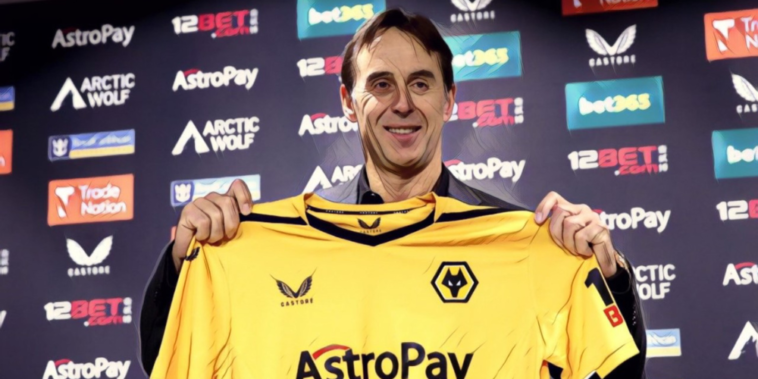 The Premier League is back, and as always, we preview the upcoming action and discuss some of the division’s major talking points.

Football fans have largely been preoccupied across the last month. The presence of a mid-season World Cup provided an almighty distraction to the Premier League season and supporters can be forgiven for forgetting what on earth was actually going on.

Just before the break, Wolves finally named Julen Lopetegui as their new boss after a charm offensive that initially failed to bear fruit. The Spaniard has had six weeks to get to grips with the role and began with a win against Gillingham in the Carabao Cup in midweek.

🗣️ “I have tested different restaurants, different pubs and we are step by step knowing more. We feel good.”

Julen Lopetegui says he feels good and comfortable following his move to the Premier League. 🐺 pic.twitter.com/ZD57er5wdN

Wolves sit bottom of the Premier League as the division restarts on Boxing Day and Lopetegui has a sizeable list of tasks upon his arrival. Goals, as ever, have been a problem for Wolves, while the defensive solidity of past regimes has disappeared during the opening months of the campaign.

However, the foundations are solid. In Ruben Neves and Matheus Nunes, he has a midfield pair that would not look out of place at the top six and bringing the best from the latter should be near the top of his agenda. With Sasa Kalajdzic out for much of the season, Wolves are closing in on a deal to sign Matheus Cunha from Atletico Madrid to ease their forward issues, on an initial loan with an obligation to purchase for around €50m.

Wolves travel to face an Everton side in free-fall on Boxing Day, a fixture Lopetegui can not afford to lose.

Magpies to return for Maddison?

Leicester’s clash with Newcastle on the Boxing Day schedule will have the sub-plot of James Maddison’s future, after the Foxes turned down two bids from the Magpies for the midfielder in the summer.

Eddie Howe made an approach to sign Maddison as he sought to add further creativity to his side, though Leicester held firm in their insistence that the 26-year-old was not for sale. Brendan Rodgers even went as far as to claim Newcastle’s opening offer of £40 million would cover just “3/4’s of James Maddison’s left leg”.

Maddison has been in the form of his life since the summer speculation, with seven goals and four assists in 13 Premier League games this season. That record earned him a place in England’s World Cup squad, though he frustratingly failed to feature in Qatar.

He will have just 18 months remaining on his deal next month and Newcastle could return as the club look to boost their push for Champions League qualification. The likes of Kieran Trippier, Callum Wilson and Nick Pope will no doubt have told Maddison all about the exciting project at St James’ Park during England’s World Cup camp.

Jones has much to prove

Southampton were another side who made managerial change just before the break, dismissing Ralph Hasenhuttl after a stagnant spell and replacing the Austrian with Nathan Jones.

Jones arrives with a burgeoning reputation after exceeding all expectations at Luton Town, but will want to prove an ill-fated spell at Stoke was an exception to his otherwise impressive coaching career. In the comforts of Kenilworth Road he has thrived, helping to turn Luton from a fourth-tier team to Championship promotion hopefuls across two spells at the club.

The boss gets mic'd up for #SaintsFC training:

Those stints sandwiched a disastrous tenure at Stoke, however, in which Jones lasted 11 months and won just six of his 38 games in charge. His first game in charge at Southampton saw the Saints lose at Liverpool and, while there was little shame in that result, the fans will be eager to see Jones prove he can cut it at the top level.

Southampton face Brighton in an all-South Coast match-up as the Premier League returns, with Jones taking on the team where he spent five years as a player and a brief spell as caretaker boss in 2014. He will want to get one over his old employers and get up and running at St Mary’s.

Reds refreshed and ready to kick on?

Liverpool have been below their best this season and sit sixth in the Premier League table. There’s a seven-point gap to the top four and Jurgen Klopp’s side need to find momentum if they’re not to miss out on Champions League football.

The pause in the season has provided Liverpool and Klopp with precious time to regroup and reflect, while Liverpool’s relative lack of participation at the World Cup could benefit the Reds across the second half of the campaign. Liverpool had just seven players in Qatar this winter, far less than the likes of Manchester City (16), Manchester United (13), Chelsea (12), Tottenham (11) and Arsenal (10).

Not the result we wanted last night, but thank you as always to the travelling Kop for your support 👏🔴 pic.twitter.com/szxSw2KY8P

Of those only Ibrahima Konate progressed past the quarter-finals, while Trent Alexander-Arnold and Fabinho had peripheral roles, featuring for just 123 minutes combined.

The time off has also allowed the likes of Curtis Jones, Alex Oxlade-Chamberlain and Naby Keita to regain their fitness and improve Klopp’s options, while Diogo Jota is also closing in on a return to action. Ahead of their Boxing Day trip to Aston Villa, it’s time for the recharged Reds to kick on and produce consistent results.

Arsenal have been dealt a blow after Gabriel Jesus was ruled out until spring 2023, with the forward’s knee injury sustained at the World Cup requiring surgery.

Jesus has been a central figure in Arsenal’s rise to the top of the division, starting every league fixture since his summer arrival from Manchester City. In those 14 appearances, he has been directly involved in ten goals and there’s a lack of depth beyond the Brazil international.

Eddie Nketiah is expected to come into the side across the festive period. The 23-year-old has struggled for status at Arsenal, but has scored 13 goals in 19 starts across all competitions since the start of last season.

Arsenal – who are five points clear of Manchester City – will require goals from elsewhere however, and will hope Martin Odegaard and Gabriel Martinelli can continue their form this season. Mikel Arteta has hinted at business in the January window and the arrival of another centre-forward option could keep Arsenal in contention for an unlikely title challenge.

It doesn’t take long for a narrative to change in football. Graham Potter began brightly after taking charge at Chelsea, with an initial nine-game unbeaten run having swept an air of positivity through Stamford Bridge.

Since then, it’s been a rather sharp decline, with a 4-1 thrashing at former side Brighton – having raided his old club for their entire coaching staff and head of recruitment – beginning a downward spiral. Further defeats to Arsenal and Newcastle leave Chelsea eighth in the table, below Brighton and a concerning eight points behind Spurs in fourth.

Another day closer to our PL return! 👊 pic.twitter.com/t29HeGRpMG

The underlying numbers do not make for good reading. While Potter’s Brighton side can be accused of being wasteful around goal, his Chelsea team are not fashioning out chances in the first place. Since his arrival in early September, only Wolves and Crystal Palace have posted worse xG (expected goals) figures than the west Londoners.

Could it be time to give Hakim Ziyech a chance? The Moroccan has flattered to deceive at Chelsea, but showcased at the World Cup how effective he can be. His creativity could be sorely used in Potter’s stuttering side.

A chance for Maguire?

Erik ten Hag has challenged Harry Maguire to replicate his England form at club level, as the centre-back looks to regain the trust of his manager at Manchester United.

Maguire impressed during England’s World Cup campaign in Qatar, despite a difficult period for his club side that has seen him lose his place in the team this season.

“And then it is up to him to show that confidence on the pitch and he didn’t show that in all the games [for United]. When he is playing with his confidence like now, he is a massively important player for us and that is what everyone expects. That’s what Harry expects from himself.

“He has that high standard, he wants to play at the highest level, he wants to lead the defensive line, so it is up to him. I’m sure he has the potential to play in our style and fit into our system.

“He has, for England, almost all the time good games. He had a period in Manchester where he performed badly and then, of course, there are difficulties but when he is confident in himself, he will put that on the pitch. When he is working hard you will get that confidence and you are seeing that with the way he is playing for England.”

Maguire faces competition from two World Cup-winning defenders, with Lisandro Martinez part of Argentina’s triumphant campaign in Qatar and Raphael Varane a winner from 2018. Given that duo were both involved in the 2022 final, neither are expected to feature against Nottingham Forest as United return to Premier League action. Provided Maguire returns from the illness that sidelined him in midweek, it offers a chance for him to win back his place in the team.

Erling Haaland was forced to watch on as the world’s finest fought it out in Qatar this winter, with Norway’s failure to qualify denying the World Cup of one of football’s most exciting talents. In an alternative world, the Manchester City star could have been present and adorning the Three Lions on his chest.

Haaland has never identified as anything other than Norwegian, but holds a special affinity for the City of Leeds and its football club. Born in England during his father’s time at Leeds United, he closely followed the Whites during his adolescence and will come face-to-face with Leeds for the first time in the Premier League on December 28.

"Erling texted me as soon as the schedule came out"

Jesse Marsch expects Erling Haaland to be 'fully ready' to face his Leeds side next week. pic.twitter.com/6qbspK5gIv

In the opposite dug-out will be Jesse Marsch, his former manager at Red Bull Salzburg, and the American has revealed that Haaland text him to discuss the clash when the fixtures were released.

“He texted me as soon as the schedule came out. I gave him permission to have a small hamstring injury for that match!” Marsch joked during his pre-match press conference. “He was born in Leeds, his father has history here and he has the club in his heart because of that. When I got the job, him and his father were supportive. We’ll expect him to be fully ready and that causes issues for us.”

Marsch knows Haaland better than most and understands the task facing his side. The 22-year-old scored his 24th goal of the season during City’s Carabao Cup win over Liverpool in midweek and has 18 in 13 league games this season. At this stage, it appears when and not if he’ll break the Premier League’s single season goal record.