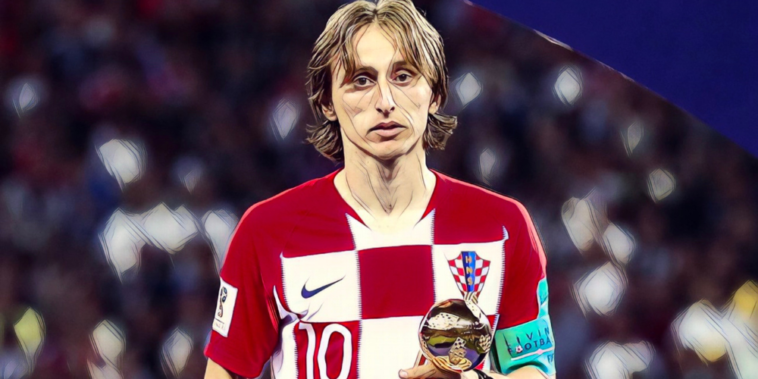 The FIFA World Cup’s Golden Ball is presented to the best player at each tournament, an illustrious accolade earned by some of the game’s greats.

Being named as the finest footballer at a World Cup is a huge honour, earning recognition during a tournament in which the planet’s best talents come together for a festival of football.

Ahead of the 2022 tournament in Qatar we’ve decided to look back at the modern winners of the prize, here are the last five winners of the World Cup’s Golden Ball award.

Luka Modric was named as the World Cup’s finest footballer in 2018, having been the inspiration behind a Croatia team that reached the final for the first time.

Modric scored twice in the group stage as Croatia progressed with a perfect record of three wins, playing a starring role in the nation’s 3-0 thrashing of Argentina in their second fixture.

The midfielder continued to shine during the knockout rounds, scoring crucial penalties as Croatia twice progressed via shootouts, with Modric among the tournament leaders for distance covered, dribbles completed and chances created.

He was unable to help his side to success as Croatia lost 4-2 to France in the final, though received some consolation in the form of the Golden Ball.

Having also helped Real Madrid to Champions League success, he was later named as winner of the Ballon d’Or to break up the decade-long duopoly of Cristiano Ronaldo and Lionel Messi on the award.

Lionel Messi won the accolade during the 2014 World Cup, having helped Argentina reach the final.

Messi was named as man of the match on four occasions during La Albiceleste’s run to the final, scoring four goals during the group stage as Argentina progressed with three wins from three games.

His impact lessened during the knockout rounds, though he played his part in Argentina’s progress to a first World Cup final since 1990. Messi’s performance in the final was subdued as the Argentines were beaten 1-0 by Germany, with sections of the media critical of his Golden Ball award.

He did, however, lead the tournament for chances created (23), key passes (24), successful dribbles (46) and goals from outside the box (3).

FIFA president Sepp Blatter was among those to call the decision a ‘mistake’, with the likes of Thomas Muller, Arjen Robben, James Rodriguez and Manuel Neuer among those with claims as the tournament’s best player.

Uruguay’s run to the semi-finals for the first time in four decades saw Diego Forlan anointed the 2010 World Cup’s best player, with the forward having scored five goals during his side’s progress to the last four.

Forlan finished top of the voting for the award in South Africa, ahead of second placed Dutchman Wesley Sneijder and Spain’s David Villa, who was third.

The forward – who had struggled during a spell at Manchester United before shining in Spain – proved himself as one of world football’s finest finishers with a number of spectacular strikes, spearheading an exciting attack that also included Luis Suarez and Edinson Cavani.

His highlights included a brace against the host nation in the group stage and he mastered the movement of the jabulani ball to score a stunning free-kick against Ghana in the quarter-finals.

He also netted a swerving long-range effort against the Netherlands and his five goals was the joint-most in the tournament alongside Thomas Muller and Wesley Sneijder.

Zinedine Zidane announced his intention to retire from football ahead the 2006 World Cup and proceeded to shine as the tournament’s finest footballer in a brilliant farewell on the world stage.

Zidane was shining light in a France team that reached the final in Germany, orchestrating Les Bleus’ passage through the knockout rounds in fine fashion.

He scored one and created another as Spain were beaten in the last-16, before producing one of the World Cup’s most iconic individual showings as France edged Brazil in the last eight.

His penalty then proved the difference in the semi-finals against Portugal and he scored again from the spot in the final, netting an audacious Panenka against Italy to become just the fourth man to score in multiple World Cup finals.

#OnThisDay in 2006, Zinedine #Zidane put on a footballing clinic against Brazil that helped propel Les Bleus into the semi-finals of the @FIFAWorldCup! 🙀 #FiersdetreBleus pic.twitter.com/txV6HEnuFM

His tournament ended in infamous fashion as he was sent off for a head-butt on Marco Materazzi, with France crashing to defeat on penalties following the dismissal of their talisman.

Zidane, however, was named as the World Cup’s best player as one of the all-time greats retired at the top of the game.

The only goalkeeper to have been named as the World Cup’s finest footballer, Kahn was a formidable presence as an unfancied Germany side reached the 2002 final.

Few had expected Germany – who had crashed out of the European Championship group stage in 2000 and whose qualification campaign included that 5-1 home defeat to England – to challenge, but a resilient defence laid the foundation for their success.

Germany conceded just one goal during their run to the final, securing a hat-trick of 1-0 wins in the knockout rounds to reach a final against Brazil.

An average German side was carried through due to the talents of their two world-class names, with Kahn and Michael Ballack in fine form during the tournament.

The former’s brilliant goalkeeping – aside from a mistake in the 2-0 final loss to Brazil – saw him named as the tournament’s best player, ahead of Golden Boot winner Ronaldo and Hong Myung-Bo, captain of surprise semi-finalists South Korea.