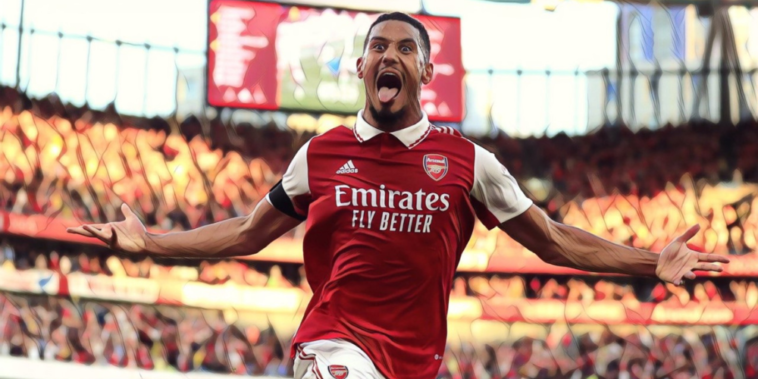 Premier League football makes its return over the festive period, with an action-packed Boxing Day schedule kicking off the season’s restart.

A mid-season World Cup presented a sizeable distraction to what has been a fascinating start to the domestic campaign, one which sees Arsenal as surprise league leaders at Christmas.

Ahead of the Premier League return, we’ve picked out some of the stars of the campaign’s opening months. Here is our Premier League Team of the Season so far…

Nick Pope arrived at Newcastle last summer as the Magpies capitalised on Burnley’s relegation to secure a deal for one of the division’s most reliable goalkeepers.

Pope’s arrival has proven astute business for Newcastle, who have exceeded all expectations to push for Champions League qualification. Their position of third in the table has been built on a formidable defensive record, with no side in he division having conceded less than their 11 goals from 15 games.

The 30-year-old leads the race for the Premier League’s Golden Glove alongside Arsenal’s Aaron Ramsdale and has proven a fine fit for the early stages of Newcastle’s ambitious project. Although perceived as a weakness upon his arrival, Pope has also demonstrated his ability to operate as a sweeper-keeper at St James’ Park. No Premier League goalkeeper has completed more defensive actions outside the penalty area.

Newcastle’s first signing following their billionaire-backed takeover has proven a good one, with Kieran Trippier having emerged as a leader of their new-look side.

The England right-back has captained the side this season in the absence of Jamaal Lascelles and has enhanced his reputation as one of the Premier League’s most productive defenders. He leads the division for crosses and crosses into the penalty area, while only Kevin De Bruyne has registered more shot-creating actions and expected assists.

He scored his first goal of the season with a sensational free-kick against Manchester City and has recorded three assists so far this season. Only Andy Robertson has managed more among defenders.

Arsenal are top of the Premier League table and Mikel Arteta’s inexperienced side are gaining in confidence.

Among the changes from last season has been the introduction of William Saliba into the side, with the defender having signed for the Gunners in 2019, before embarking on three consecutive loans. Those moves have accelerated the development of the centre-back, who has been one of the division’s best defenders in his first Premier League campaign.

An excellent reader of the game with a powerful presence and cool in possession, Saliba has all the attributes to become one of Europe’s best defenders. Still just 21, he has performed with maturity at the heart of the Gunners’ backline this season.

It wasn’t too long ago that Lisandro Martinez was being written off by some, with the defender’s difficult adaptation to the Premier League having seen the critics out in mass.

Accusations that the diminutive Argentine could not handle the rigours of English football have since been removed, as Martinez has emerged as a key figure in Erik ten Hag’s early reign at Manchester United.

‘The Butcher’ has mixed defensive tenacity with an air of confidence and class in possession, forming an encouraging understanding with Raphael Varane at centre-back. Quicker and taller opponents have been thwarted, as the summer signing from Ajax has used his positional intelligence to break up attacks at the back.

He will return to the Red Devils as a World Cup winner, having played his role in Argentina’s triumphant campaign in Qatar.

Joao Cancelo continues to stamp his own interpretation on the left-back role at Manchester City, with the defender performing his task in a unique manner for Pep Guardiola’s side.

Rarely has a full-back been given such licence to vacate his starting position, but Cancelo’s influence in advanced areas often makes his freedom more reward than risk. A crucial cog in City’s ball-dominant machine, his flair makes Cancelo one of the most watchable defenders in Europe.

Just two players have managed more touches than Cancelo this season, while only three – Kevin De Bruyne, Kieran Trippier and Trent Alexander-Arnold – have made more passes into the penalty area.

Arguably the best player in the Premier League and certainly its most creative, Kevin De Bruyne has flourished once again at Manchester City this season.

The arrival of Erling Haaland has provided De Bruyne with the perfect focal point for his penetrative passes, with their combination having been unstoppable on occasion this season. It’s already nine assists this season for De Bruyne, who is well on course to break the Premier League single season record (20) he currently shares with Thierry Henry.

He’s up to fifth in the Premier League’s all-time assist chart, with an assist-per-game record far superior to any name inside the top ten. Expect that total to continue rising, as City hunt down Arsenal in the title race.

Martin Odegaard is fast becoming Arsenal’s answer to the aforementioned De Bruyne, with the midfielder getting better and better in north London.

Odegaard has shone with the dual responsibility of the club captaincy and creative burden, knitting together attacks for a team who have been vibrant and impressive this season. He has scored six league goals – just one less than his total from last season – in 13 appearances and Arsenal’s best moves have often flowed through the Norwegian.

After failing to find his fit at Real Madrid, the 24-year-old appears right at home at the Emirates. Teammate Granit Xhaka is unfortunate to miss out on selection behind or attack-minded midfield duo.

Leicester’s leading light in an otherwise difficult start to the season, Maddison was an instrumental figure in the Foxes’ turnaround before the World Cup break.

Brendan Rodgers’ side failed to win in their first seven games of the season, but Maddison continued to enhance his reputation even amid their struggles. Creative, classy and with an improving end product in the final third, his return of 11 goal contributions (7G and 4A) in 13 games earned the midfielder inclusion in England’s World Cup squad.

His selection came after much clamour for Maddison to travel, such has been his impact as one of the Premier League’s most exciting talents this season. His penchant for the spectacular has turned heads and it would come as little surprise to see interested clubs firm up their interest this winter. Newcastle are understood to be keen on a deal.

Bukayo Saka and Miguel Almiron – who enjoyed an extraordinary purple patch before the break – are the notable omissions here in arguably the most competitive position on the team sheet.

Gabriel Martinelli is beginning to fulfil his vast potential after his fitness issues, with the forward having been symbolic of Mikel Arteta’s front-footed league leaders.

There’s an electricity to Martinelli’s game that brings excitement to the Emirates, his game built on a mix of scintillating speed, tireless work-ethic and attacking threat. He has five goals and two assists so far this season and looks set for a career-best campaign in north London.

🎶 And he plays for The Arsenal 🎶

The 21-year-old remains raw, but can be exhilarating when allowed to get up a full head of steam. Liverpool learned that the hard way after Martinelli’s match-winning performance to down the Reds in early October.

The goalscoring run of a certain Norwegian has somewhat overshadowed what has been Harry Kane’s best start to a Premier League season.

Kane has 12 goals in just 15 appearances for the north Londoners to date, with his goals having been crucial to Spurs’ climb into the top four as long-term accomplice Son Heung-Min has struggled. It appears that Kane took Son’s outscoring of him personally last season, as he has racked up the goals for Antonio Conte’s team.

He’s now up to third in the Premier League’s all-time goal chart and will join Alan Shearer and Wayne Rooney in the exclusive 200 club before the season’s end. Spurs have not quite clicked this season, but Kane has ensured the club remain in contention for Champions League football again.

The first name on the team sheet, it has been some introduction to English football for Erling Haaland.

The Manchester City goal-machine has obliterated the Premier League’s best defences this season, racking up records and an astonishing number of goals. It’s 18 goals in just 13 league games for Haaland, who has already scored three hat-tricks – becoming the first player to score three successive home hat-tricks in the Premier League after a Manchester derby treble in October.

A reminder that Erling Haaland has so far scored 18 goals in 13 games in his debut Premier League season.

And he's had a full month on charge. 🔌 pic.twitter.com/caBjdgevbi

After a month off due to the World Cup, Haaland took just nine minutes to get back on the goalscoring trail as he netted the opener in Man City’s 3-2 win over Liverpool; his 24th of the season already.

The worrying news for Premier League defences is that he’s just getting started. No record is safe.

Read Also – Messi, Qatar, and the fulfilment of a football fairytale