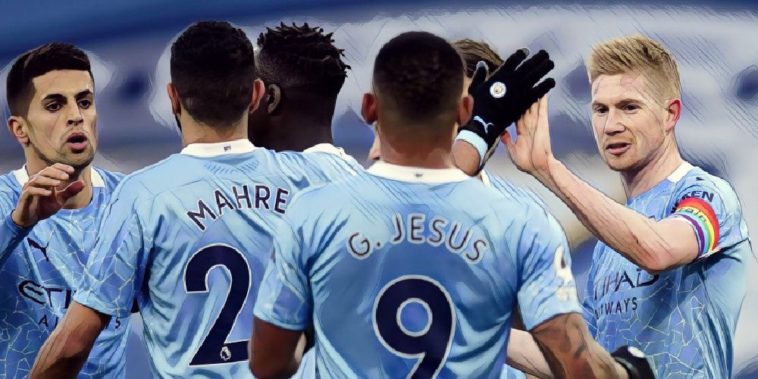 Manchester City comfortably despatched of Fulham at the Etihad to record back-to-back league wins for the first time this season.

City got off to a great start and took the lead in just the fifth minute, Kevin de Bruyne driving onto the Fulham half before slipping the ball into the path of Raheem Sterling who took a touch before sliding it past Alphonse Areola, ending the England international’s  mini goal drought.

It was a first half of pure domination from the hosts, and they doubled their lead from the spot after Sterling was tripped in the box by Joachim Andersen, with De Bruyne stepping up to despatch his second penalty of the season.

Man City continued to dominate after the break, with Fulham’s limited number of efforts restricted to long-range potshots, the Cottagers thankful to Areola for a number of decent saves to keep the score at just two.

Speaking afterwards, Pep Guardiola insisted it was an ‘important’ victory, but not for the first time this season lamented his side’s missed chances.

“It’s important to get a good run of points,” he told BT Sport. “For the chances we had, yes [we should have scored more], but it was the same in Porto. It’s important that we won and that defenders don’t make mistakes and we don’t gift goals.

“We know the quality from Kevin [de Bruyne] in the goals and assists. He’s so important for us. Just look at how he runs and fights as a modern footballer today. He is an example of this. He put all this together and every season it’s massive.

“It’s important to win games and clean sheets are a good fact, especially with the amount of chances we created again. The Fulham physicality was impressive. Scott Parker always has something tricky, you know, he did well against Leicester. Now everyone can beat everyone. That’s why it’s important for the victory and no injuries to go into the Champions League with fresh players.

“We have to wait until the end of the weekend but what’s important is the feeling in the team. We will improve.”

The result moved Man City into the top four, with a game against Marseille to come in midweek before a trip across the city to take on Manchester United next weekend.