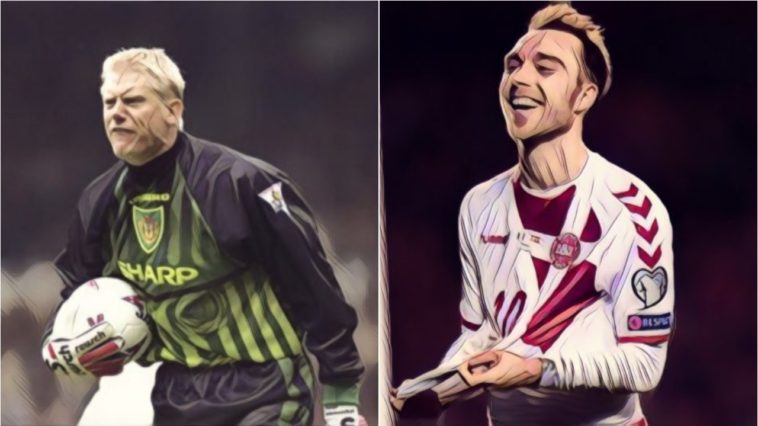 Denmark have provided some fantastic players to grace the English top flight over the years, but who would you pick in an ultimate Danish five-a-side?

While we’re waiting for the Premier League to finally return next month, we want to indulge in some fantasy team building and put together the perfect five man team from a host of countries

This isn’t necessarily about picking the five best Premier League players that a given nation has produced, but the five who we think would have been ideal for a game of astro.

Was it ever going to be anyone else? To be fair, Thomas Sorensen and Schmeichel’s own son Kaspar would make excellent inclusions in this five-a-side, but when the Great Dane is vying for the number one spot then they will just have to make do with a view from the sidelines.

Peter Schmeichel, arguably the greatest ever goalkeeper to step foot onto a Premier League pitch, possessed outstanding shot-stopping ability, was almost unbeatable in one-v-one situations and commanded his area like few others could.

The ex-Manchester United goalie also carried a lethal weapon: his one-armed throw. Schmeichel was able to launch the ball well into the opposition half with his arm, and with deadly accuracy too, providing several assists throughout his career.

In 1994 Alex Ferguson was on the verge of doing the unthinkable. #mufc

Coupled with the former Aston Villa player’s penchant for scoring late in games, Schmeichel would be the ultimate five-a-side armament between the sticks.

Although his time at Liverpool was blighted by injuries, Daniel Agger still had a long and fruitful career in which he won the League Cup, was named Danish Footballer of the Year twice and received 75 international caps for Denmark.

Agger was a classy operator at the back and possessed a brilliant ability to read the game, which compensated for his lack of pace. He also scored a few memorable strikes during his time with the Reds, including a sweeping shot against Chelsea in 2007 that helped send them to the Champions League final.

No other Danish defender of the Premier League era comes close to offering what he brings to the table for our five strong team.

Speaking of classy operators, Christian Eriksen would provide the skill, guile and playmaking ability that would unlock the stoutest of five-a-side defences.

The former Spurs midfielder contributed 51 goals and 62 assists in the Premier League during his seven year stay in North London before moving to Inter Milan in January.

Eriksen’s delivery and danger from set pieces would also be an invaluable asset on the astro pitch.

Having all the nice and fancy ballers is great, but sometimes you need a bit of steel in your lineup – and no better Dane to provide that than Thomas Gravesen.

With his baldy head and fiery demeanour, the Danish destroyer looks like someone you don’t want to mess with, but he backs up that image with actions too. The former Everton and Real Madrid midfielder was known for putting in tough tackles and retaliating in force if someone tried to put it up to him, as Robinho found out many years ago.

No one will be arguing that Nicklas Bendtner is in the top five Danish players to have featured in the Premier League, but this writer has a sneaking suspicion that he would be absolutely lethal in a game of five-a-side.

The lack of pressure and the smaller pitch would likely suit Lord Bendtner down to the ground, as he can focus on what he does best – running onto passes and scoring headers from crosses – instead of worrying about putting in a hard shift and working defensively from the front (not that he’s ever been too worried about that).

And maybe he’ll pop up with a late goal like he did against Spurs, his first ever goal for Arsenal.

The former Chelsea winger can offer some much needed pace late on in a game when legs are tired and energy levels are low.

See Also: ‘Geometry in motion’ – The legacy of the 2009 Champions League final