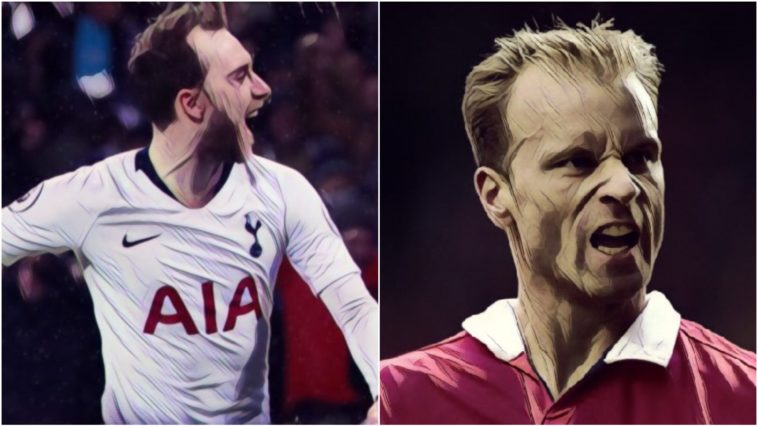 From Dennis Bergkamp to Edwin van der Sar, Ajax have produced some of the best young talents in world football over the years, with many of them going on to play in the Premier League.

The ten best Ajax products to have played in the Premier League:

There shouldn’t be any controversy when I say this, but no doubt one of you out there will take umbrage with it: Dennis Bergkamp is the best Dutch player to have ever featured in the Premier League, and he is up there with the most intelligent and elegant players in the division’s history.

Bergkamp had an outstanding start to his career at Ajax, scoring at a rate of a goal every two games, but his momentum was curtailed by a wretched couple of seasons at Internazionale between 1993-95. Arsenal saved him from his Italian misery, and he went on to become a Gunners legend.

The striker retired while at the club in 2006, having scored 120 goals, won three Premier League titles, and created an abundance of memories for his legion of fans. Few players can claim to have possessed the kind of skill and technique that he did.

Ibra moved to Amsterdam as a 19-year-old in 2001, but he so very nearly could have joined Arsenal. Arsene Wenger attempted to sign the Swede, but Ajax were “keener” for his signature.

After three years at the Dutch club, Zlatan went on a tour of major European clubs, winning league titles in Italy, Spain and France, before finally making his way to the Premier League by joining Manchester United.

Despite his impressive goalscoring exploits, his critics claimed that Zlatan was merely benefiting from starting up front for dominant teams rather than being a dominant force in his own right. He would prove them all wrong by scoring 28 goals in one season, winning both the League Cup and Europa League.

A brief return to United following a serious injury didn’t go as planned, but he now features in MLS for LA Galaxy, where he is still banging in the goals.

These days the major football clubs move on young talent with such ferocious speed that they’ve barely hit puberty when they’re snapped up by the likes of Chelsea, Man City, et al. Clubs in Netherlands and Belgium struggle to keep ahold of their most talented academy players before they can play in the first team.

Hence why there was apprehension about Christian Eriksen and his ability to cut it at the top level after he only left Ajax at the age of 21. Why had he been ignored by every big club before Spurs bought him in 2013?

At first it appeared that was for good reason, but under Mauricio Pochettino he has become the lynchpin of a Tottenham side that has consistently competed at the upper end of the Premier League. In 270 games across his senior career, he has provided 62 goals and 75 assists and proven his worth as a creative midfielder, with Manchester United and Real Madrid interested in his services.

The speedy winger did not come through the Ajax system, but he did join the club as a 19-year-old in 1992, and they would harness his quick feet and technical ability to turn him into one of the most exciting players in Europe.

Five seasons later Overmars moved to Arsenal, where he would win the double in 1998. He overcame early criticism to put in numerous memorable performances, notably the time he cut Man United to ribbons.

Overmars joined Barcelona in 2000, but unfortunately for him, his four-year stint at the Nou Camp coincided with one of the worst spells in the club’s history and he left without winning a trophy.

The last few seasons of Overmars’ career were a disappointment, but he is one of the few players to have played for the possession-obsessed triumvirate of Ajax, Arsenal and Barcelona, having won a Champions League and a Premier League title.

Van der Sar was one of the few star players from Ajax’s Champions League triumph in 1995 to stick around long after their final victory over AC Milan. When he eventually did leave in 1999, he headed to Juventus, becoming the first non-Italian to play between the sticks for the Bianconeri.

When the Turin outfit bought Gianluigi Buffon in 2001, the Dutch goalkeeper refused to play second fiddle to the Italian, and moved to newly promoted, big-spending Fulham. The Cottagers held onto him for four years, despite van der Sar arguably being the most complete goalkeeper of his generation.

Manchester United eventually prised him away, and it’s there that he would win a second Champions League medal before retiring in 2011.

Has a player and club ever made so much sense for each other as Rafael van der Vaart and Spurs?

The adventurous playmaker joined Ajax as a 10-year-old, making his debut at 17 and going on to make 156 appearances for the Eredivisie side. From there he went to Hamburger SV, before the move that his early promise had warranted: Real Madrid.

Injuries and falling out of favour with managers meant he only remained in the Spanish capital for two seasons, although he did contribute 12 goals in 76 games for the club. Spurs snaffled him up in a cut-price deal in 2010 after a move to Bayern Munich had supposedly collapsed the day before the deadline.

Although the move apparently nearly didn’t happen because he fell asleep, van der Vaart went on to enjoy “the best two years in my football life” at Tottenham, scoring 28 goals along the way. Unfortunately for the Dutchman, the London outfit drafted in a host of new midfielders in 2012, forcing him to return to Hamburg.

After another three seasons in the Bundesliga he had spells at Real Betis and FC Midtjylland, but due to injuries he was unable to recreate the same spark that made him such a delightful creative outlet earlier on in his career, and just last year he retired from playing completely at Danish side Esbjerg.

By the time Davids joined Tottenham Hotspur, he was entering the winter of his career, but he was still capable of mesmeric things on the pitch. A case in point, his first goal for the London outfit:

That would turn out to be his only goal for Spurs, but his career accomplishments speak for themselves; a Champions League with Ajax, several league titles with Juventus, and a cup triumph with Internazionale. For a man who stood out on a football pitch for his unique appearance, he was also an absolute baller.

Plucked from Nigeria by Ajax as a teenager, Kanu was another one of Van Gaal’s golden generation of the nineties. The striker’s career very much followed a similar path to Bergkamp, moving from the Dutch club to Inter Milan, where he struggled for a few years before setting the Premier League alight with Arsenal.

Further spells with West Brom and Portsmouth burnished his reputation as a fan favourite, and he retired in 2012 having scored 121 goals.

The Finnish footballer was 20 years of age by the time he joined Ajax, but it was in Amsterdam that the attacking midfielder made his big break. After scoring 129 goals in seven years at the club, he made the natural progression to Barcelona, but when he could only find the net four times for the Blaugrana, he was shipped off to Liverpool after one season. Injury problems curtailed his playing time on Merseyside, where he scored nine times, before moving back to Ajax.

‘Litti’ signed for Fulham in 2008, although he never played a game for the Cottagers and left after a few months. His Premier League career never met expectation, but he was undoubtedly one of the world’s greatest talents during the nineties.

Newcastle United did not get to see vintage Patrick Kluivert by the time he got to St. James’ Park in 2004, although he did contribute 13 goals in all competitions in his one season at the Magpies.

By then the Dutchman’s best years were in the past, having conquered Europe with Ajax before winning a La Liga title in 1999 with Barcelona. He retired from international duty that same year, having scored an impressive 40 goals in 79 games.

Read: How Borussia Dortmund recovered from the brink of financial ruin