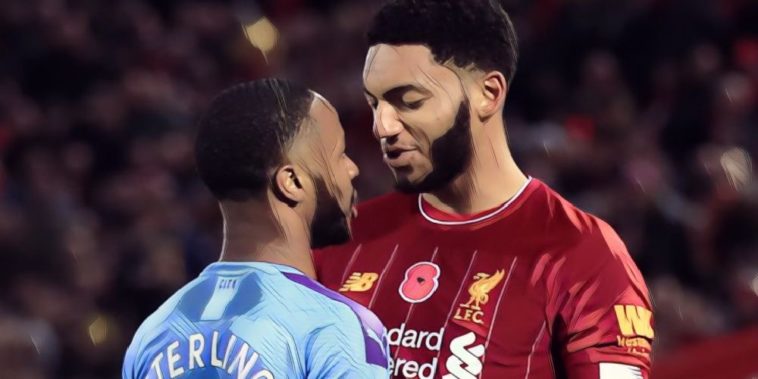 Following a clash between England colleagues Raheem Sterling and Joe Gomez on Monday afternoon, we looked back at some infamous fights between teammates over the years.

The two men got into an minor altercation towards the end of Liverpool‘s 3-1 win over Manchester City last Sunday, perhaps an indication of just how intense and important that game was in the battle for the Premier League title. At the end of the match both players appeared to make up. End of the matter, surely.

Not quite. When they met up with the England squad for international duty at St. George’s Park on Monday, they got into another confrontation that reportedly lasted roughly “10-15 seconds”, from which Gomez came away with a scratch under his eye. The Athletic reported the incident thusly:

Gomez was in the canteen shaking everyone’s hand and then reached Sterling, who was sitting down. Sterling snapped and responded, “So you think you’re the big man?”, stood up and tried to get Gomez in a headlock, knocking food over from the table. “It was a pretty full-on thing and food went everywhere,” said one source. “Sterling behaved like a bit of a child.”

Three Lions boss Gareth Southgate then sent Sterling home from the camp, but before he left the manager was convinced by squad members to let him remain so long as he apologised for his behaviour. He did so, but has been dropped for the Montenegro game on Thursday. But where does this bust-up rank in the most famous fallouts and fights between players on the same team?

Six times Premier League teammates got into a fight:

The two players had a, erm, disagreement during Aston Villa‘s goalless draw with West Ham United in September that quickly descended into a physical confrontation.

El Ghazi and Mings arguing with each other and neither sent off. Kieron Dyer and Lee Bowyer spinning in their graves. pic.twitter.com/our7YJpwRu

Strong words were clearly being had before the two squared up and El Ghazi bumped heads with the centre-back. It went no further than that, but the two had to be kept apart by several players.

It was relatively harmless by the standards of some really heated brawls between teammates in the past, and Mike Dean gave them a stern talking to, but refrained from whipping out the red card.

There are days in football where you just get fed up, the frustration levels are rising and you’re set to blow. With Newcastle United losing 3-0 to Aston Villa and down to ten men, both Kieron Dyer and Lee Bowyer got to this stage and took it out on each other.

Afterwards Magpies boss Graeme Souness said he had “never seen anything like it”, which is really saying something.

It’s never nice losing a derby, but when Arsenal were 4-1 down to Tottenham Hotspur in the League Cup semi-finals in 2008, strike partners Emmanuel Adebayor and Nicklas Bendtner started pushing and shoving each other.

The Dane came away with a bloody nose, while Arsene Wenger typically claimed not to have seen the incident.

After a team night out during a warm-weather training camp, the Welshman attacked Riise with a golf club in his hotel room. The Norwegian later wrote that he was lucky his shins weren’t broken and career ended there and then.

Bellamy celebrated his equaliser for Liverpool against Barcelona by performing a mock golf swing, revealing the “sincerity of his apology” for his cowardly act of violence.

Five of the best Liverpool matches against Spanish opposition

It took just four minutes of Blackburn Rovers’ Champions League tie against Spartak Moscow for Batty and Le Saux to have a right go at each other.

The two bundled into each other chasing an errant pass, and it soon descended into shoving, throat-grabbing and Le Saux even threw a punch at Batty. Rovers ended up losing the game 3-0.

Former Everton hard man Gravesen has never been one for pulling out of a tackle, but after leaving one in on Robinho during a pre-season training camp the Brazilian decided he would retaliate by throwing a punch at his teammate. Big mistake.

The Dane went for his Real Madrid colleague, and the two had to be separated by the rest of the squad.

Read: Five matches that have defined the Liverpool-Man City rivalry in the modern era