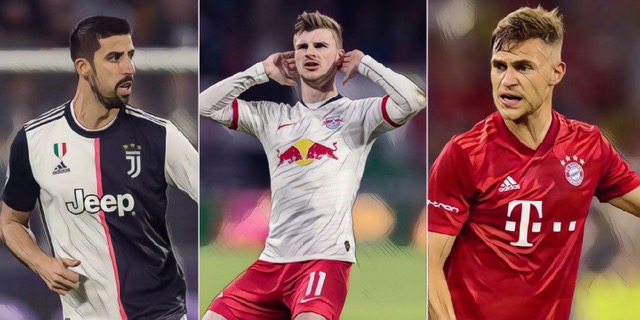 German football has a long and illustrious history of producing leading talents, the nation comfortably amongst the most respected Countries in the global game.

The foundations for the continued success of the German national team is built on a hugely successful series of academy systems scattered throughout the Bundesliga and beyond, a revolution of how the country viewed youth development coming around the turn of the millennium.

Amongst the leading systems in Germany has been that of VfB Stuttgart, the five-time winners of the Bundesliga having produced quality and quantity from within their ranks despite an often chaotic period since their last title success in 2007.

The introduction of several young talents to the first-team in the early 2000’s led to the club becoming title challengers throughout the decade, and whilst that success has dipped in recent years, the club’s academy continues to act as a conveyor belt for high quality footballers.

Here are five of the best VfB Stuttgart academy graduates:

The veteran forward is currently in his second spell at Stuttgart after a career of much success for club and country, Gomez coming through the academy ranks before playing a crucial role in the club’s most recent Bundesliga title triumph.

Gomez enjoyed a true breakthrough season during that championship winning campaign to be named as the German Footballer of the Year, the towering forward acknowledged as the finest player in the division at the tender age of just 21.

Not the most gifted technically or athletically, Gomez’s goalscoring prowess and intelligent movement allowed him to thrive at the highest level for over a decade, joining Bayern Munich for a club-record fee in 2009.

In four seasons with the Bavarians the forward scored 113 goals in just 174 appearances, winning five major honours including forming part of the side which won a historic treble under Jupp Heynckes during the 2012/13 campaign.

Gomez later enjoyed spells at Fiorentina and Besiktas – where he won a Turkish Süper Lig title – and VfL Wolfsburg before returning to Stuttgart two years ago. A World Cup winner with Germany, Gomez retired from international football in 2018 having scored 31 goals in 78 appearances for the national side.

Sami Khedira joined the Stuttgart academy as an eight-year-old in the mid-nineties and graduated through the club’s academy ranks, the midfielder breaking into the first-team and scoring the goal that clinched the Bundesliga title in the final fixture of his debut campaign.

Khedira spent four seasons in the first-team and made 132 appearances in all competitions, before his performances for Stuttgart and the German national side – notably at the 2010 World Cup in South Africa – saw Real Madrid move to sign the authoritative midfielder.

Winner of La Liga and the Champions League during five seasons in the Spanish capital, Khedira headed to Juventus on a free transfer in the summer of 2015 and continued to add to a burgeoning collection of silverware despite injury problems.

Four seasons in Turin has delivered four consecutive Serie A titles, Khedira amongst the most successful German exports of the modern era.

Amongst the finest German footballers of his generation, Kimmich has enjoyed a rapid rise to prominence for club and country in recent years, becoming arguably the centre-piece of the side for both Bayern Munich and Germany.

The intelligent midfielder honed his skills in the academy system at Stuttgart, though a youthful Kimmich headed to ambitious second tier RB Leipzig in search of first-team minutes and quickly began making an impression, his performances garnering the attention of Pep Guardiola and Germany’s biggest club.

Stuttgart’s loss has certainly proved to be Bayern’s gain following Kimmich’s move to Munich, the 25-year-old proving himself to be one of the best players in the division whether taking to the field at right-back, centre-back or his preferred defensive midfield role.

A superb passer and reader of the game, Kimmich’s list of honours already includes four Bundesliga titles and two German Cups, in addition to 48 caps and Confederations Cup success for Die Mannschaft.

Another of the Bundesliga’s stand-out stars at present, but another who – unfortunately for Stuttgart – is plying their trade at a rival side in Germany.

Werner scored prolifically for the club’s academy sides and made an immediate impression in the first-team, becoming Stuttgart’s youngest ever player when making his debut and later setting a new landmark as their youngest ever goalscorer.

The forward made 103 appearances for the club in all competitions but their relegation from Germany’s top-flight prompted a club record €10m move to RB Leipzig, where Werner has since established himself as one of the most exciting young forwards in European football.

Werner’s record currently stands at an impressive 91 goals in 153 appearances for Leipzig, whilst he has also scored 11 times in 29 appearances for the national side, including winning the Golden Boot during Germany’s Confederation Cup success in 2017.

Just where would Stuttgart be if they had managed to keep hold of their best academy talents? Certainly not in Germany’s second tier, you would imagine.

Gnabry spent five seasons amongst the club’s youth sides before being lured to English football and Arsenal, though he struggled to make much of an impression in north London and returned to the Bundesliga with Werder Bremen in 2016.

After just a single impressive season in his homeland he moved on again to Bayern Munich, spending a season on-loan at Hoffenheim before thriving upon his return to Munich.

Gnabry’s electric pace and ruthless finishing ability have seen him gradually emerge as a key component of the Bavarian’s attack, winning the club’s Player of the Season accolade following a domestic double winning season in 2018/19.

At international level his reputation has continued to thrive, averaging a goal-per-game for Germany with 13 goals in just 13 appearances since scoring a hat-trick on his senior debut three years ago.