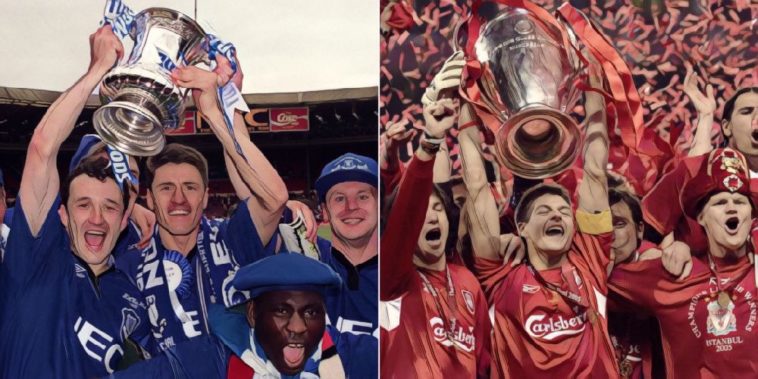 Football anniversaries can be both wonderfully evocative and immensely sobering occasions. Fans are often simultaneously reminded of epic glories whilst also reflecting on just how old they now are as events become more hazy with the passing of time.

While the years spill into decades, former players get greyer and often podgier as they recount the goals that brought home a famous cup adorned with the right set of winner’s ribbons.

Whilst the latter anniversary still conjures up the fondest of memories for Liverpool fans across the world, the former has become that evokes something of a collective grimace for Evertonians. Since that famous upset all those years ago, when Paul Rideout pounced to head home the match winning goal, they have had precious little to cheer.

A cruelly ironic 25-year silver anniversary was ushered in last week to mark precisely the longest period the club has ever gone without silverware.

Not that Everton fans need reminding. Their neighbours across Stanley Park are quick to revel in what has become a generational trophy drought. During that same period, the void between the two fierce rivals has increased on and off the field. That gap is now also measured in far more than just trophies and bragging rights and still growing.

Not so long ago in the city’s collective memory, Merseyside’s two clubs would go toe-to-toe for the country’s big honours. Between 1984 and 1990 the league championship only left the city once, with the Reds claiming four titles to the Blues two. The rival clubs also contested two cup finals, with the ’89 final taking on a hugely poignant and sombre tone as a whole city mourned in the aftermath of the Hillsborough Disaster.

Even as Everton prepared to face United in 1995, their city rivals were not a million miles away in the distance. Liverpool had endured a stark reversal in fortunes during the 1990s winning only two major honours and failing to put up anything other than a token gesture in a solitary title race.

However, their decline was not as stark as Everton’s. The Goodison Park club flirted perilously close with relegation on three occasions during a traumatic decade.

Their fans could at least take solace in the fact that Liverpool were also weathering a barren spell, but even that comfort was not set to last. The Reds’ reemergence as prize winners during the early 2000s set the foundations for a consistent spell in the latter stages of the Champions League, culminating of course in that 2005 triumph and a further final appearance two years later.

Under David Moyes, Everton were at least offering their own revival to a fan base that now marked a respectable finish in the league as progress. Under the former Preston boss though, they manfully ploughed up the table and even elbowed Liverpool out of the top four in 2004/05 and qualified for the Champions League.

However, their failure to reach the group stages, along with Liverpool’s fifth continental triumph that season, made their achievements somewhat bittersweet.

Under Moyes, they were also often hamstrung by the ownership of Bill Kenwright. The wealthy theatre producer genuinely loved his club but was simply unable to bestow a war chest on his manager to help him consistently compete with the fabled “Big Four”.

The emergence of Manchester City in 2008 also exacerbated the issue for Everton in their quest to regain parity with the big sides once again.

While Moyes’s tenure was admirable, for a club that had won 24 major honours, it was a significant failing of the Scot’s to not bring home any silverware during his tenure. When you consider that Wigan Athletic, Portsmouth, Birmingham City, Middlesbrough and Blackburn Rovers all paraded honours for their fans to celebrate during Moyes’s 11 years at Goodison Park, it does make their drought all the more bemusing and painful for their vociferous supporters.

On top of this, as Moyes’s time came to an end in 2013, Liverpool were going through what would become their second rebirth of the century.

After spending a baffling amount of time on the commercial fringes of the game, Liverpool were forged anew under the ownership of Boston based Billionaire John W. Henry.

Henry’s ownership under the banner of Fenway Sports Group, offered that crucial all-American marketing know-how that had been woefully absent from Liverpool’s DNA. This was slowly yet carefully corrected with the club’s immense branding potential unleashed, particularly during the stellar success enjoyed since Jurgen Klopp’s arrival.

The results off the field have been just as impressive in recent years, with Liverpool’s books showing world record net profits in 2019. While player sales undoubtedly boosted their figures, the Red’s recorded commercial revenue of €210.9 million; a decade earlier that figure had stood at less than €80 million as the club waded through financial mediocrity.

Now the seventh richest football club in the world, Liverpool were primed and ready for a return to the biggest honours in the game. Their Champions League win in 2019, one year after a painful final defeat to Real Madrid, was a mark of their new found status on and off the field of play.

For Everton, their fans not only had to once again stomach their rival’s success, they had problems of their own that needed urgent attention.

Their own financial results were deteriorating. A 5% drop in commercial revenue for 2018/19 saw just £41 million brought in. Match day revenue was also down for the same period as the Toffees endured a season that was more miss than hit under the guidance of then new manager Marco Silva.

New ownership had brought the promise of big spending and the possibility of ending the trophy drought. However, Farhad Moshiri’s millions have so far failed to elevate the Toffees from their mid-table mire, with the Goodison Park fan base only growing more restless at what they see as squandered funds on below-par signings and poor managerial choices.

The promise of a new stadium in the City’s historic docklands has brought some cause for optimism. And yet, even this flicker of light in the darkness is dimmed with doubts.

#didyouknow that #Everton FC’s proposed new stadium at Bramley-Moore Dock will hold 52,000 people once it’s complete, contribute £1bn boost to the city region’s economy and create up to 15,000 jobs and attract 1.4m visitors to the city each year? pic.twitter.com/jyedAyuW9i

While planning permission has been granted for a much needed modern venue, the likes of Arsenal, Sunderland and West Ham should offer a relevant warning that glossy new grounds provide no gilded paths to glory. There are also concerns about growing debts affiliated with the project as well as the recent revelation that the club’s wage to income ratio sat at a dangerously high figure of 85%.

Everton remains a former powerhouse club with a hugely passionate fan base and massive potential if the right configuration of ingredients can be found. Oddly they can take inspiration from their city rivals, who, before the intervention of the High Court in 2010, were just hours away from insolvency and administration, before emerging on the other side with proper owners and a blueprint for success to drag them out of a considerable malaise.

A 25-year wait for silverware will be extended into the 2020/21 season, albeit with veteran winner Carlo Ancelotti now at the helm and enjoying fan popularity. It has been a barren and bitter era for a club that has still won more league titles than Spurs, Manchester City and Chelsea.

Clubs like Newcastle United and indeed Manchester City offer a further warning that such runs can go on indefinitely unless there is a seismic shift somewhere along the line. Everton supporters, as they consider the now cavernous void that has opened up between themselves and Liverpool, will be more desperate than ever to see this run come to conclusion so they once again enjoy their anniversaries and revel in their rich history.