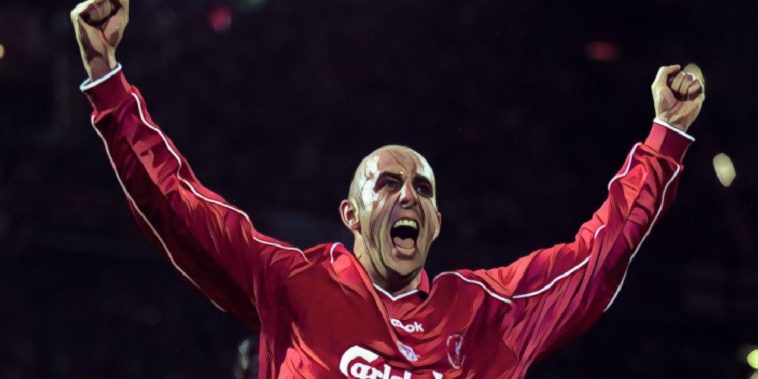 Mediocrity beckoned and Gary McAllister was ready to embrace it.

Lifting the First Division title with Leeds United in 1992 – prior to the formation of the Premier League – was a distant memory when he signed for Coventry City in the summer of ’96.

The Scot was captain for club and country but, at 31, was still nowhere close to being put out to pasture. Regardless, he was ready for the descent.

Coventry survived a relegation battle on goal difference just a couple of months before he arrived at Highfield Road. Ron Atkinson was in the process of making the transition from manager to director of football with McAllister’s close friend and former Leeds teammate Gordon Strachan ready to take charge.

Manchester City were the unlucky side to suffer the drop courtesy of a measly seven-goal difference, by the way. These were indeed different times, yet cash was still king.

“Looking back now, he wins the league with Leeds and then he ends up signing for Coventry. Then Liverpool take him and he goes on to win I don’t know how many trophies with them. It was a strange one that he signed for Coventry,” former club teammate Gary Breen tells The Football Faithful.

“He was such a technically gifted player, he would drop deeper, I never remember him playing with his back to goal, his game was about playing one twos and dictating play. He was fantastic at it.

“And he will tell you now that it was a financial move to Coventry more than anything else,” the ex-Republic of Ireland international continues.

McAllister admitted as such in a 2015 interview with Off The Ball: “In all honesty, I went to Coventry for money. It was the first time I ever moved [for money]. I was 31 when I left Leeds and people were asking me why? I was Leeds captain, Scotland captain, ‘why are you going to a team that are strugglers at the bottom end of the table?’ I went for money.

“It was the first time I ever thought [of money], it was always football moving. I can only admit that now that I’ve left Coventry.

“So it was nice to get the option to make a football move. I wanted to go to Liverpool to play for Liverpool.”

And why wouldn’t he?

At Coventry, McAllister was part of sides that finished 17th, 11th, 15th and 14th in his four years in the English Midlands.

Barry Quinn, a fellow midfielder from Dublin who broke into the first team during the 98-99 campaign having captained Brian Kerr’s Ireland Under-18s en route to winning the European championship, recalls the positive effect he had on those around him.

“You would learn so much just watching what he would do at training, not only on the pitch but how he conducted himself. He looked after his body, he prepared the right way and the reason why he was able to go on for so long is that he had a cleverness to match his ability on the ball,” he explains to The Football Faithful.

Quinn’s debut for Coventry came away to Manchester United. The night before he rang home to tell his parents he had an inkling he would play.
“My Ma told me she’d light a candle for me going up against Roy Keane,” he laughs.

Coventry lost but Quinn was thankful to have McAllister by his side. “He talked to me through the whole game and gave me information all the time. You knew if you had him beside you, with his quality and class, he could always drive the team forward.

“He was very influential for me because he would tell me little things in training, positioning tips and passing.”

Yet, it was another young Dubliner who had just as pivotal an effect on McAllister as he did with Quinn. Robbie Keane blazed a trail across Highfield Road when he signed from Wolves for a record £6 million, making him the most expensive teenager in British football.

From day one Keane and McAllister hit it off, and the term of affection McAllister uses for him is “gallus”. “It’s a Glasgow word, someone who backs themselves and has swagger,” the Scot, now assistant to Steven Gerrard at Rangers, told this reporter last year.

“Do you know when you just find somebody who you click with? I fed off Keano. It was fantastic for me. I’d come from Leeds to Coventry. We won the league there so I’d seen that hunger and desire, Keano had special ability; like a young Gary Speed or David Batty. When I think of Keano I think of Eric Cantona because he had the maturity and a confidence of a Cantona at a young age. He played with a swagger and was on a mission from the start. Then, boom, he was gone. It was a whirlwind.”

It was the pair who departed just days apart; Keane to Inter Milan for £13m, McAllister signed by Gerard Houllier on a Bosman free transfer.

“This is fairytale stuff for someone at my stage of life. It did surprise me when Liverpool came in for me, but I have talked through the specific role that Gerard Houllier wants me to have, and I am more than happy with it,” McAllister said at the time.

“It’s a tremendous challenge for me, and something that I really didn’t expect at this stage of my career. But I intend to grasp it and enjoy it.”

Not everyone was convinced. Houllier, with Michael Owen the hottest striker in Europe and Steven Gerrard emerging as a midfield tour de force, was questioned for signing a 35-year-old when the ambition was to qualify for the Champions League at a minimum.

“He seemed an odd buy,” Gerrard wrote in his autobiography. “OK, he was once a terrific midfielder for Leeds United and Scotland, but his best days surely behind him … I rang my agent, Struan Marshall, who knew McAllister well. ‘Stru, what’s all this about?’ I asked.

“Don’t worry, Stevie,’ replied Struan, ‘Gary Mac will be brilliant for Liverpool, and for you as well. Listen to him. Learn from him’. ‘Sod off, Stru’ I said. ‘McAllister can learn off me!’ How wrong I was.”

What Gerrard was perhaps unaware of is that Marshall was also McAllister’s agent. Along with Emile Heskey, Jamie Carragher and Nicky Barmby, Marshall was a key figure in Anfield circles.

And the faith he showed in his latest client to sign for Liverpool was well founded. They succeeded in so much more than just Champions League qualification, celebrating a League Cup, FA Cup and Uefa Cup treble.

McAllister proved more than simply a guiding hand from the fringes, he led the team and set standards, as well as producing key goals throughout the campaign.

The Scot scored the winner at Anfield against Barcelona in the second leg of their Uefa Cup semi-final and a stunning 40-yard free-kick in the fourth minute of injury time to win the Merseyside derby at Goodison Park.

He scored in the tight run-in against old club Coventry and then at Bradford to secure Champions League qualification.

And on that famous night in Dortmund, when Liverpool triumphed 5-4 over Alaves in a dramatic Uefa Cup final, the veteran scored and assisted three more to earn the man-of-the-match award.

Not to mention this song from The Kop.

Mediocrity was left behind for immortality.

Read: How QPR shaped Sir Les: ‘The secret to having it all is knowing that you already do.’

See Also: Faustino Asprilla: The mercurial Colombian who could win a game on his own – if he felt like it