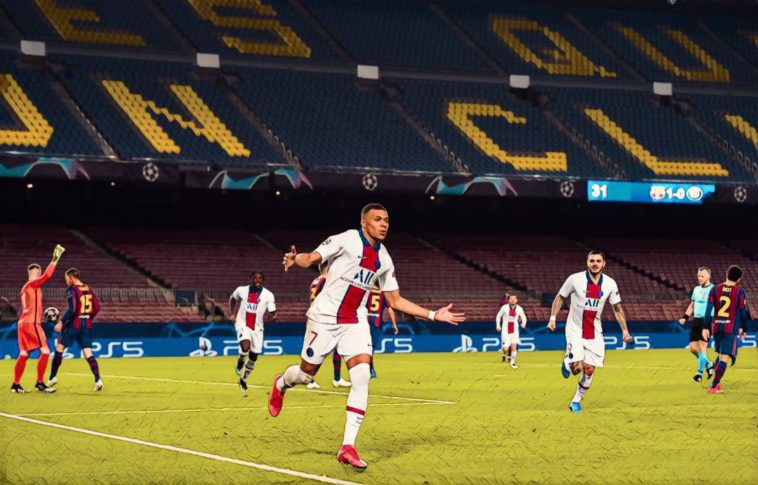 This season’s Champions League has seen a number of records broken or equalled, and in some cases absolutely smashed.

We might as well start with the two young footballers who are quickly becoming the game’s fastest-rising stars.

Erling Haaland’s brace against Sevilla on Tuesday night made him the fastest player to reach 20 goals in the Champions League, doing so in just 14 matches.

The Borussia Dortmund striker is also the top-scoring Norwegian in the competition after surpassing Ole Gunnar Solskjaer’s previous record of 19.

One imagines that Kylian Mbappé will break a lot of records in his career, and he overtook two in one go on Wednesday evening.

The Frenchman’s penalty for PSG in their 1-1 draw with Barcelona saw him become the youngest player in Champions League history to reach 25 goals in the competition at 22 years and 80 days of age. The man he overtook was none other than Lionel Messi.

That goal was his fourth over two legs against Barça, the most a player has ever scored against the Catalan outfit in a single season in the competition. His hat-trick in the first leg was the first time anyone had scored three goals against the Blaugrana at the Nou Camp in a knockout tie.

Bayern Munich created history last season when they became the only team to win every match in a single Champions League campaign, winning 11 out of 11 games on their way to glory.

The Bavarian outfit continued that winning feeling into this season, coming out victorious in their opening four group games of the competition. As a result their 15 consecutive wins is a Champions League record, and equals Atlético Madrid for most successive wins in a European competition (Europa League).

They remain undefeated in Europe since the beginning of last season, with their last defeat coming against Liverpool in the round of 16 in 2018/19.

Their manager Hansi Flick also holds the record for most consecutive wins as a coach, claiming victory in 12 in succession before that draw with Atleti. The only other manager to do this is Jupp Heynckes, who won 12 with Bayern between 2013 and 2018 either side of his initial retirement.

Five of Liverpool’s most famous victories over German opposition

It’s been a bit of a wild season for Olympique Marseille, who sacked their manager Andre Villas Boas following a controversial press conference.

The French club made some unwanted history in this season’s tournament when they lost for the 13th time in a row – the longest losing streak in Champions League history.

The record for the longest home unbeaten streak belongs to Bayern Munich, which ran for 43 games between 1969 and 1991.

Once again Bayern Munich feature. The German champions hold the record for the longest away unbeaten run, having avoided defeat for 17 games.

The run began with a 2-1 win against Celtic in the 2017/18 group stage and continued with their recent 4-1 victory over Lazio in the first leg of their round of 16 tie.

Technically two of these matches were played in neutral venues, as they faced Barcelona and Lyon in the 2019/20 quarter-finals and semi-finals respectively, both of which were played in Lisbon over a single leg as a result of the COVID-19 pandemic.

Olivier Giroud is the oldest scorer of a hat-trick in the Champions League era, scoring four goals for Chelsea against Sevilla on 2 December 2020, aged 34 years and 63 days.

The Frenchman is the 23rd player to score four in one match in the Champions League era of the competition.

This is the first time since 2004/05 that either Cristiano Ronaldo or Lionel Messi will be absent from the quarter-final stage, but both men continued their excellent goal scoring runs in the competition nevertheless.

Messi has scored in a record sixteen consecutive Champions League seasons for Barcelona, a streak that he shares with Real Madrid striker Karim Benzema (from 2005/06 to 2020/21). Alongside Ryan Giggs, they are the only players to score in 16 different campaigns.

Ronaldo is one behind, having scored in 15 consecutive campaigns for Manchester United, Real Madrid and Juventus from 2006/07 to the current season.

Speaking of ever presents, Real Madrid continued their ridiculous run of reaching the knockout phase this season when they progressed from Group B by the skin of their teeth.

This is the 24th time they have done so, dating back to the 1997/98 season, which is the most consecutive seasons in the Champions League knockouts of any team.

The youngest player to play in the tournament is Youssoufa Moukoko, who was 16 years and 18 days old when Borussia Dortmund played against Zenit Saint Petersburg on 8 December 2020.

Vinícius Júnior scored the fastest Champions League goal by a substitute when he found the net 14 seconds after coming on for Real Madrid against Shakhtar Donetsk on 21 October 2020.

FC Porto became only the third team to advance on the away goals rules after extra-time in a knockout tie.

Their last-16 home tie with Juventus this season saw them win 2-1 before losing by the same scoreline in Turin. Both sides scored a goal each in extra-time, which was enough to hand the Portuguese side the victory on aggregate.

Manchester City haven’t just been stingy in the Premier League, they have been doing it in Europe too.

Pep Guardiola’s charges conceded just one goal in their six group games, equalling the record for fewest goals allowed in a group stage. Ten other teams have achieved this, including three Premier League clubs: Liverpool and Chelsea in 2005/06 and Manchester United in 2010/11.

Despite gaining 15 points in the group stage this season, Barcelona finished runners-up in the table to Juventus thanks to a 3-0 defeat to the Old Lady at the Nou Camp. That equalled the record for most points without winning their group, previously done by Man City in 2013/14 and Bayern Munich in 2017/18.

Sevilla and FC Porto won 13 points and finished runners-up in their respective groups, which is the joint-second most points accumulated without finishing top of the table.

Ferencváros became the sixth club to progress from the first qualifying round all the way to the group stages. Liverpool are the only team to reach the knockout stages after entering in the first round proper (2005/06).

Dynamo Kiev manager Mircea Lucescu became the oldest coach (75 years and 132 days of age) to both feature in and win a Champions League match, doing so against Ferencváros in this year’s group stage.

The Frenchwoman presided over Juventus’ 3-0 win over Dynamo Kiev in the group stages on 1 December 2020. The 36-year-old had previously taken charge of the Uefa Super Cup final between Liverpool and Chelsea in 2019, which made her the first woman to officiate a major men’s European final.