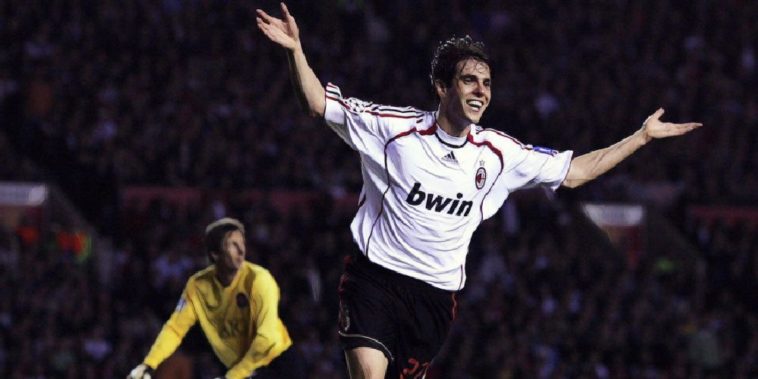 Manchester United meet AC Milan in a huge clash in the Europa League’s last 16 this week, two traditional giants of European football going head-to-head as they seek a return to the highest level of the game.

It will be the first meeting between the two teams in more than a decade with both having fallen from positions as once-dominant forces, though the Europa League offers a realistic avenue to continental silverware for both sides and a return to prominence.

This will be the sixth time the two have been drawn together in Europe and ahead of the clash we’ve decided to revisit one of the most memorable meetings between the sides, a Champions League semi-final that saw a brilliant Brazilian announce himself as the world’s finest footballer.

We revisit the night that Kaka tore Manchester United apart.

Milan of the mid-2000s were a formidable force and were seeking to reach a second Champions League final in just three seasons, having eliminated Manchester United at the last-16 stage on their way to an unforgettable and inexplicable showpiece defeat to Liverpool in Istanbul.

Kaka had sparkled during that first half at the Atatürk Stadium as Milan raced into a three-goal half-time lead, though the Italian side’s subsequent collapse meant his exhilarating showing was rendered as merely a footnote in the most dramatic of finals.

Two years later the Brazil international was beginning to emerge as one of football’s finest players, the retirement of Zinedine Zidane and declining fortunes of Ronaldinho leaving a vacancy at the pinnacle of the sport.

Kaka scored five goals in the group stages as Milan finished top, before proving the difference in extra-time as the Rossoneri were tested over two legs against Celtic in the last 16.

He scored again, from the penalty spot, as Carlo Ancelotti’s side overcame Bayern Munich 4-2 on aggregate in the last eight, though it was the semi-final that catapulted a captivating talent to genuine superstardom.

After three years without a league title, Manchester United were showing signs of recovery and, spearheaded by an effervescent attack of Wayne Rooney and Cristiano Ronaldo, were heading towards Premier League success.

The latter in particular was shining during a career-best season that finished with multiple individual accolades, and the semi-final showdown was billed as a clash between two players contesting to be crowned as the world’s best.

It would be Kaka that claimed that title, leaving a young Ronaldo waiting for his turn to assume the mantle.

Ronaldo gave his side the lead in what was a feverish atmosphere at Old Trafford, the winger’s header looping up off goalkeeper Dida to hand the Red Devils the perfect start after just five minutes.

From there, however, Kaka took control and produced a display that lives long in the memory.

Ancelotti’s side were built to support the scintillating talents of their free-roaming number 10, Kaka provided freedom by a narrow midfield behind him, one which allowed him to roam and drive at opposition defences with that familiar and unique gait.

There were warning signs already as the Brazilian had several sights on goal, before exploding after 22 minutes to score a goal that had Kaka’s signature stamp written all over it.

Clarence Seedorf spotted the ghosting run of the playmaker before feeding a ball into his path, a heavy touch allowing Kaka the space to accelerate away from Gabriel Heinze before finishing delightfully across goal and into the far corner.

Milan were level and in the ascendency, with Kaka pulling the strings as he drifted into pockets of space behind United’s midfield anchors of Michael Carrick and Darren Fletcher.

The very best players in world football are able to create something out of nothing, and Milan were ahead by half-time courtesy of a moment of individual brilliance from a player at the peak of his powers.

Dida’s long punt upfield appeared to spell little danger for the home side, only for Kaka to use his deceptive strength to shrug off the challenge of Fletcher and nod the bouncing ball into space ahead.

Heinze’s attempt to close down the midfielder only resulted in him being left flat-footed as Kaka nonchalantly lobbed the ball over the Argentine defender, before the covering Patrice Evra raced back in a desperate bid to stop him in his tracks.

As the space narrowed, Kaka headed the ball one side of Evra before manoeuvring around the Frenchman, resulting in Evra crashing comically into teammate Heinze to leave the Milan maestro through on goal.

There was only ever going to be one outcome, Kaka sliding an inch-perfect finish beyond Edwin van der Sar to give Milan a second away goal and put the Italians within touching distance of the Champions League final again.

It was a goal that encapsulated the best of a wonderful footballing talent, moving through the gears with effortless ease to carve open the Premier League side.

The narrative of the tie changed as Wayne Rooney scored twice – including a superb late goal – to hand Manchester United the lead heading into the return leg, but Kaka excelled once more as Milan dismantled the Red Devils at a rain-soaked San Siro.

He scored the opener with a brilliant left-footed finish before further goals from Clarence Seedorf and Alberto Gilardino booked Milan’s place in Athens, where they would exact revenge on Liverpool with a 2-1 win to seal the club’s seventh European Cup success.

Kaka won the free-kick that led to the opener before assisting Filippo Inzaghi’s second of the showpiece, the Brazilian finishing as the leading scorer in the 2006/07 Champions League with 10 goals from 15 appearances.

The accolades followed with the star winning almost every major individual award in the game, including both the Ballon d’Or and FIFA World Player of the Year awards with his status as the world’s best secured following his starring performances on the Champions League stage.

It would be the best we would see of Kaka who, despite two more impressive seasons with Milan, failed to quite recapture those performances at the highest level, struggling to find his best form following a world-record move to Real Madrid in 2009.

That record-breaking fee lasted for just days as Cristiano Ronaldo joined him at the Bernabeu, and the Portuguese superstar and Lionel Messi would take the game to new heights over the course of the next decade.

The prelude to the duo’s dominance of the Ballon d’Or was an incredible season from Kaka, his unforgettable performance at Old Trafford a highlight in a campaign that saw him named as the world’s best player.

At that time, there were quite simply few who compared.