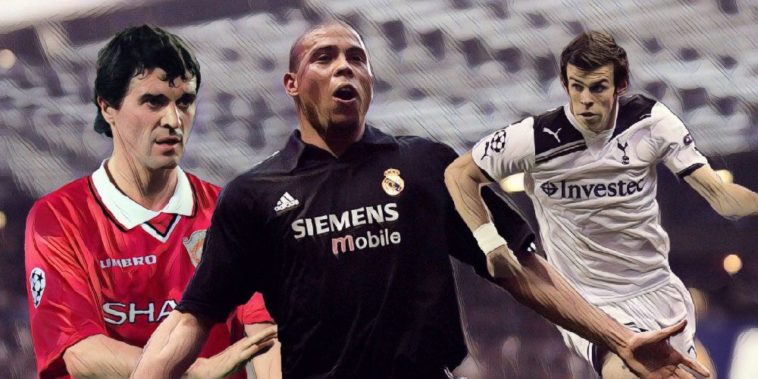 The greatest competition in club football, the Champions League is arguably the biggest stage in the sport.

The tournament pits together Europe’s elite in an annual battle to be crowned the continent’s champions, with many of the most iconic players of their generations having produced career-defining performances on European nights.

Ahead’s of this evening’s fixtures we’ve decided to look back at some of the most memorable showings the competition has seen, here are five of the best individual performances in Champions League history:

The inspirational figurehead behind the most dominant side in English football, Keane’s legend at Old Trafford would be forever linked to an all-action evening in Turin.

Chasing an unprecedented treble, Sir Alex Ferguson’s side found themselves two goals down in just 11 minutes at Juventus in the semi-final second leg, their hopes of advancing to the final seemingly over with the score 3-1 on aggregate.

The formidable Italian outfit had reached the final in each of the three season’s prior to their meeting with United, but the sheer will of their combative Irish central midfielder would drag United back from the brink.

Keane glanced home a header to reduce the arrears, but after picking up a booking the narrative changed, the club captain set to miss the final should United progress.

Undeterred, Keane covered every blade of grass to drag United through, goals from Dwight Yorke and Andy Cole eventually sealing their place in a final they would win, immortalising themselves as treble winners.

Arriving at Old Trafford in possession of a 3-1 first-leg lead, Real Madrid’s Galacticos survived a topsy-turvy second leg to progress courtesy of their superstar Brazilian forward.

The reigning Ballon d’Or winner had inspired Brazil to World Cup success the previous summer before heading to Spain, where he quickly became a fan’s favourite amongst the famously demanding Los Blancos fans.

Arguably the most iconic display of his Real Madrid career came in this quarter-final second leg, Ronaldo scoring a superb hat-trick to earn a standing ovation from both sets of supporters. Manchester United would do their utmost to turn the tie, but each time Ronaldo responded in stunning style.

A thrilling encounter would see United claim a 4-3 victory on the night, but the evening belonged to the brilliance and ruthless finishing of O Fenomeno.

Arguably the performance that defined Steven Gerrard, the Liverpool midfielder captained his boyhood side on a surprise run to the Champions League final in 2005, a dream venture that would soon turn into a nightmare.

Facing an AC Milan side containing stellar names such as Andrea Pirlo, Kaka and Andriy Shevchenko, Liverpool were horribly exposed in a first-half in Istanbul that saw them chasing shadows for much of the contest.

Rafael Benitez’s side trailed after just 52 seconds and headed for the interval 3-0 down, their dreams seemingly over in embarrassment on football’s biggest stage. What would happen, however, would be the greatest turnaround in final history.

With Gerrard as the catalyst, Liverpool turned the final on its head in a stunning six-minute spell. It was the Liverpool skipper who headed home his side’s first, before the midfielder’s burst into the box won the penalty for Xabi Alonso to equalise at the second attempt.

An all-action display saw him fill in at right-back as Liverpool rode their luck to reach a penalty shoot-out, goalkeeper Jerzy Dudek’s heroics sealing the club’s fifth European Cup and helping to secure Gerrard’s place in Anfield folklore.

Gareth Bale made his name on the biggest stage in club football following this electric Champions League performance against Inter Milan just over a decade ago.

The Welsh winger was rising to prominence as the exciting star of an emerging Tottenham team, becoming the team’s talisman and announcing himself to world football with an unforgettable display in the San Siro.

The north London side were enduring a nightmare on Italian soil in 2010, reduced to 10-men after just eight minutes following goalkeeper Heurelho Gomes’ red card and finding themselves 4-0 down to the reigning European champions at half-time.

However, Bale dragged Spurs back into the contest almost singlehandedly, dismantling one of the world’s finest right-backs in Maicon with a scintillating display of pace and finishing. Three times the buccaneering Bale rampaged down the left flank explosively before firing home, a shell-shocked Inter relieved to hang on for the final whistle.

Bale produced a similarly devastating performance in the return fixture as Spurs thrashed Inter 3-1 at White Hart Lane, the youngster beginning to make the world’s leading clubs sit up and take notice.

Few players have lit up the Champions League quite like Lionel Messi, who could have featured on this list several times over following some breathtaking displays in recent years.

We’ve opted for his one-man destruction of Arsene Wenger’s Arsenal in 2010, the Argentine superstar producing a performance of the highest quality to eliminate the north London side in the quarter-finals.

Nicklas Bendtner’s early goal had threatened to cause a shock at the Camp Nou, though Messi was in no mood for it and simply tore Arsenal’s defence apart.

He helped himself to four goals in a ruthless display, his unique blend of evasive movement and dribbling coupled with a finishing masterclass in Catalonia.

Arsenal boss Arsene Wenger labelled Messi as the greatest player he had ever seen following the clash, the quite frankly ridiculous and arrogant questions of whether the superstar could cut it in English football destroyed forever more.