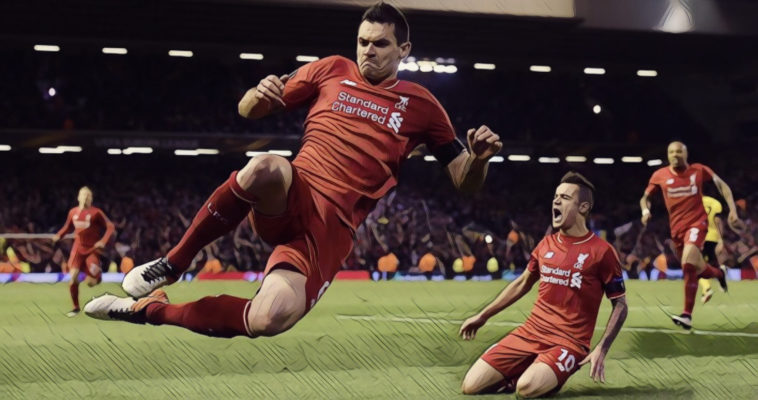 Liverpool face RB Leipzig in the Champions League’s knockout stages this evening, the Premier League champions in a strong position to qualify following a 2-0 win in the first meeting between the sides.

Jurgen Klopp’s side have been in torrid form in recent weeks, however, and face a Leipzig side in the midst of a Bundesliga title challenge and who head into the clash on the back of six consecutive league victories.

Ahead of the clash, Liverpool can take heart from past victories against German opposition with the Reds having enjoyed some memorable nights against Bundesliga sides in Europe.

Here are five of Liverpool’s most famous victories over German opposition:

Liverpool are English football’s most successful side in continental competition, with their first European success coming with a UEFA Cup win in 1973.

The final pitted the Reds against a Borussia Monchengladbach side who would become familiar opponents over the course of the next decade, the clash played over two legs with the first held on Merseyside.

It was the English side who took a commanding first leg lead following a fine performance at Anfield, Kevin Keegan scoring twice – including a diving header to open the scoring – in addition to a Larry Lloyd goal following some slack Monchengladbach marking.

There were also missed penalties for both sides, Keegan spurning the chance for a hat-trick from the spot and Jupp Heynckes seeing his effort saved by Ray Clemence, denying Monchengladbach a priceless away goal.

That save proved the difference as Liverpool held on to win the trophy despite a 2-0 second leg defeat in Germany, Bill Shankly’s side securing the club’s first continental silverware.

Four years later and Liverpool and Monchengladbach met once again, though this time for club football’s biggest prize in the 1977 European Cup final.

Both sides were appearing in their first ever final with the showpiece held in Rome’s Stadio Olimpico, and it was the Reds who opened the scoring as Terry McDermott fired home to hand Bob Paisley’s side a half-time advantage.

That slender lead was cancelled out just seven minutes into the second period however, Allan Simonsen’s stunning strike levelling the scores, the Denmark international rifling a left-footed effort across goal and into the top corner.

Chances were squandered at either end before Tommy Smith headed Liverpool back ahead, and the club’s first European crown was secured when Phil Neal scored from the spot with eight minutes remaining after Steve Heighway had been brought down inside the penalty area.

Liverpool were champions of Europe for the first time, a trophy they would defend in fine fashion the next season, overcoming a first leg deficit to once again beat Monchengladbach in the semi-finals.

Following that aforementioned success on the European stage, Kevin Keegan made the surprise decision to leave the European champions and signed for Hamburg in a £500,000 deal, the forward instantly handed a reunion with the Reds as the two sides met in the UEFA Super Cup.

The first leg of the clash ended in a 1-1 draw as David Fairclough’s equaliser ensured parity ahead of the return, one which saw Liverpool thrash their German visitors in sensational fashion at Anfield.

Phil Thompson opened the scoring and it was a goal that opened the floodgates, a hat-trick from Terry McDermott and further strikes from summer signing Kenny Dalglish and Fairclough securing an emphatic 6-0 win for the hosts.

McDermott’s treble means he remains one of just two players to have scored a hat-trick in the UEFA Super Cup, a feat only since matched by Radamel Falcao for Atletico Madrid against Chelsea in 2012.

Another reunion, this one seeing Jurgen Klopp face former side Borussia Dortmund as Liverpool were drawn against German opposition in the quarter-finals of the Europa League in 2015/16.

The first fixture finished 1-1 at the Westfalenstadion as Mats Hummels cancelled out Divock Origi’s opener for Liverpool, before the return resulted in an all-time classic encounter under the Anfield lights.

Dortmund raced into a two-goal lead inside just nine minutes as Henrikh Mkhitaryan and Pierre-Emerick Aubameyang got the visitors off to a lightning start, and whilst Origi pulled one back for Liverpool, it was 3-1 to the Germans soon after as Marco Reus fired home.

Liverpool were facing elimination and needed to score three times inside the final half hour, faint hopes raised as Philippe Coutinho’s crisp finish reduced the deficit, before Mamadou Sakho headed home from close range to set up a grandstand finish.

There would be one last, dramatic twist in the tale as Dejan Lovren rose high to head James Milner’s stoppage-time cross in for a Liverpool fourth, Anfield erupting on a pulsating evening of European action.

After suffering an agonising defeat to Real Madrid in the 2018 Champions League final, Liverpool’s bid to reach a second successive showpiece saw them sneak through the group stages by the narrowest of margins before being handed a daunting clash with Bayern Munich in the last 16.

Bayern has reached at least the semi-finals in six of the previous seven seasons and, following a goalless draw on Merseyside in the first leg, were the favourites to progress to the last eight.

Liverpool showed they were again a force at the top level of European football, however, following a brilliant team performance that saw the Reds dismantle the Bundesliga champions on German soil.

Any hopes of progress for Bayern were then all but ended as Van Dijk powered home a header, before Mane sealed a superb win for the Premier League visitors with his 10th goal in 10 games.

Liverpool marched on and thrashed Porto over two legs before an improbable semi-final comeback against Barcelona, overturning a 3-0 first leg deficit to win 4-0 at Anfield and reach a second successive final.